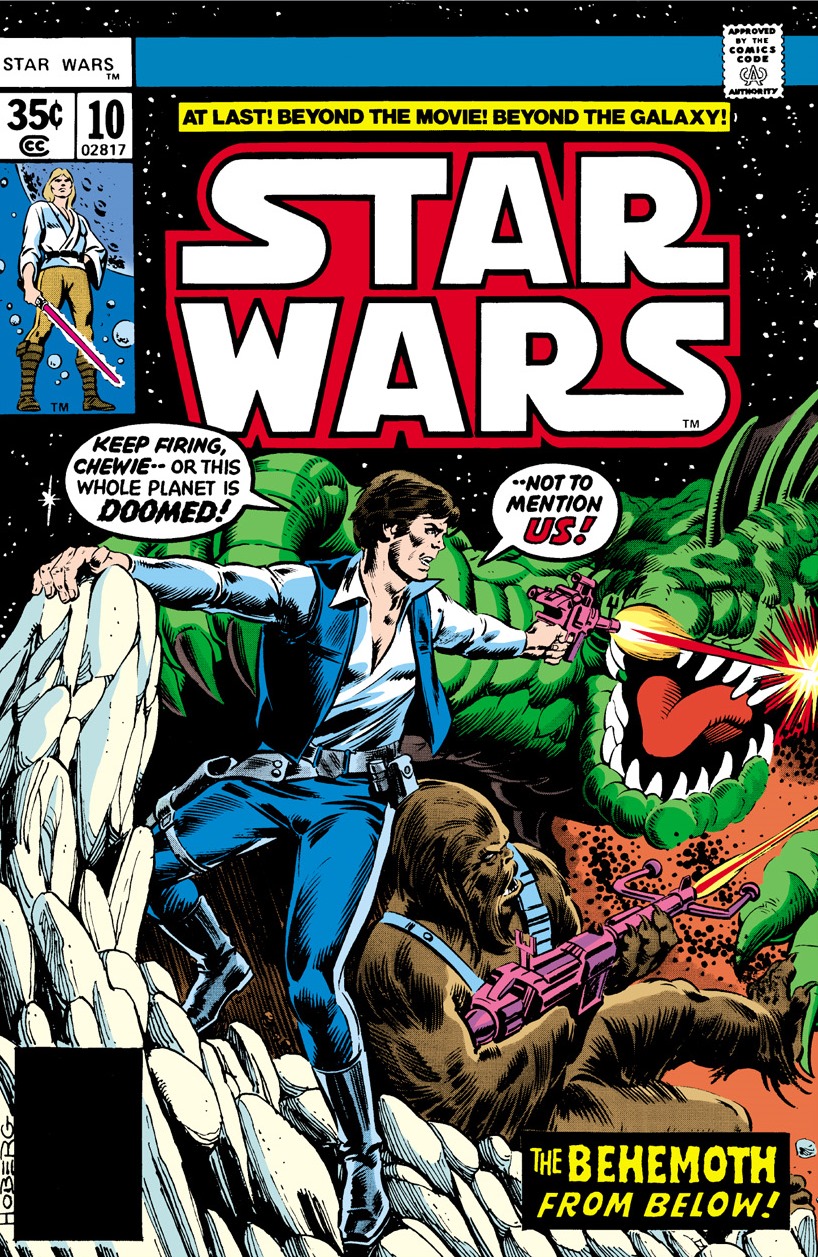 Marvel Star Wars Issue 10: Behemoth from the World Below

What is it ? : This one is all action, so this won't be a long review. The village Shaman has released the Behemoth from beneath the ground, and directs it to attack Serji-X Arrogantus and his Cloud-Riders.
The massive creature resists all attacks from the gangs weapons, and Han and his team are relieved that it is ignoring them, however Sergi-X realises that it's the Shaman which is controlling the Behemoth, so begins to direct an attack towards him. The beast stomps on Sergi-X, and whether accidentally or with a purpose to kill the man controlling it, it crushes the shaman as well.
With the Behemoth now uncontrolled and presenting a danger to the village they're being paid to protect, Han directs his team to attack the creature, but their weapons are ineffective.
Seeing the massive beast as a challenge that only a Jedi Knight on a holy quest can deal with, Don-Wan Kihotay attacks it with his lightsabre (spelt in that fashion). Hedji aids the Kihotay, shaming his comrades for leaving the old man alone to face the creature, but is blasted by a beam of energy that it fires.
Han realises that the Lightsabre seems to be the only weapon which not only effects the creature, but it also fears, so rushes forwards grabbing the sabre from Kihotay and plunging it deep into the Behemoths chest, killing it.
The villagers pay up as they promised, and thank Han for finding the man in the "Starkiller Kid", who instead of taking his cut of the money and using it to get offworld, remains at the village settling down with the Shamans granddaughter.
Oh, and there's a short interlude along the way, where Leia is travelling to find out what has happened to Luke and the Droids, saying she should never have allowed him to leave alone.

High Points : Although basically the entire issue is one long fight against the Behemoth, it does break down into sections, so it seems like quite a lot happens, with the heroes just avoiding taking action in the early part because the Behemoth is just a danger to Sergi-X and his gang.
There's also a bit of subtext here, with hints that the Behemoth may have some kind of connection to the force or the Jedi, although nothing is explicitly stated apart from it's hostility to the lightsaber of Don-Wan Kihotay.

Low Points : Okay, I have to admit in my write up for the last issue I commented that Don-Wan Kihotay had taken a hit for Amaiza, and I thought he was down for the fight, but that seems forgotten this issue, so not sure if it's a mistake or the artwork for the last issue was just confusing.

And I have to comment on Jinn's outfit, previously I thought he was dressed in a similar fashion to Luke wore on Tatooine, white shirt, floppy cap with goggles, tan trousers. However, now he appears to have bare legs, which seems to be a common artistic choice for the artists in this comic, as many men seem to be wandering around in shorts.

So what do you really think ? : I kind of liked this one, but these issues are so short as to fly past. I did enjoy the way the battle does have stages, with Hedji shaming the others about leaving Don-Wan to face the Behemoth by himself, and the growing relationship between Jaxxon and Amaiza, as they seem to be looking out for each other during the fight.

Final Words : I can definitely see why I loved my Star Wars comics as a kid, there's loads to like here, even if it's not really Star Wars as we now know it. This is a hugely different version of the Galaxy Far Far Away, but it's populated by lots of interesting characters, and although more fantastic that the now established continuity, this does come across as a version where there's a lot of adventure to be had.