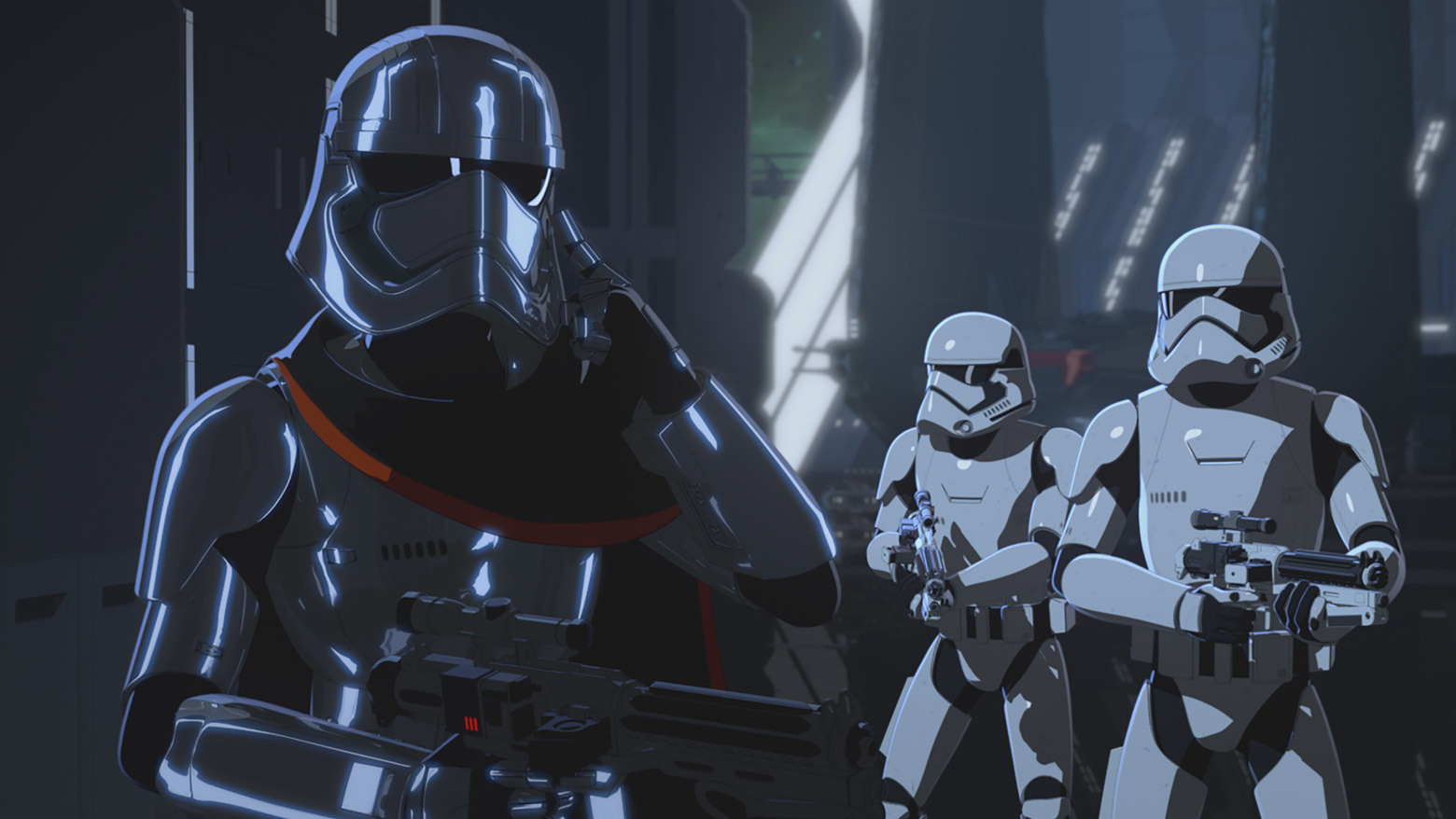 What is it ? : Tam goes to Yeager and complains that he's allowed Kaz to fly the Fireball, but Yeager responds that it's his ship and he'll lend it to whoever he wants, but she reveals that she was repairing a stabiliser and that without it the Fireball won't operate correctly.
In orbit, Kaz is aboard the Fireball when it's systems cut out, and he thinks he's going to die, but the radio comes to life and Poe Dameron contacts him as a Resistance corvette and it's escort come out of Hyperspace and tractor Kaz aboard.
Poe takes Kaz to see General Leia Organa, who thanks him for the information on the First Orders operations on Colossus station, especially the documents he stole from Commander Doza's office Poe receives orders to investigate a First Order station they've found in a nearby asteroid field, but is told to investigate only, not to engage the enemy.
He chooses Kaz as his wingman, and the two depart in X-Wings to investigate, finding a massive station embedded into an asteroid in the field. They board the station, then order Poe's astromech to autopilot the fighters out of the hangar, and hide among the asteroids.
They locate a command center, and BB-8 accesses the computers which reveal that the base was mining Dedlanite, which is used to make blasters, and that 200 million tonnes were extracted, which would make a lot of blasters. However, they have tripped alarms, and Captain Phasma and some First Order Stormtroopers arrive to scuttle the station, along with a Tie Fighter escort.
Poe and Kaz manage to slip off the station, and engage the Ties, which gives Phasma time to finish rigging the station to explode, the First Order then leave through hyperspace, and Poe and Kaz have to out race the explosion as the station detonates.
Poe manages to outrace the explosion, but Kaz seemingly is caught in it, however he maneuvered his fighter inside a small asteroid, protecting it from the explosion.
Back at the Resistance Corvette, they update Leia, and she congratulates Kaz, telling him that everyone has a place in the Resistance, and his is a very important one.

High Points : Whatever positives I can find in this episode are going to sound a little lackluster, as they're all countered by massively bad points. So we get some nice action in this episode, and the area that Resistance actually performs well in, starfighter combat. We get Poe and Phasma returning, and we get Leia making an appearance, as well as some actual Resistance work going on. This is far more like what I thought the series would be like when I first read about it, the fledgling Resistance fighting the First Order.

I also have to complement Kaz's comments about the New Republic, how if the senators are like his father, they won't just accept the evidence gathered so far, that they are too comfortable, getting bribes and making money off the build up of the First Order. We actually get to see Kaz's beliefs and how they came into conflict with the New Republic, showing why this fighter pilot would leave his position and join the Resistance.

Low Points : As I mentioned above, the positives of this episode are all countered by negatives, so we get Kaz actually getting some action, however, this is Kaz so he's naturally bad at it. In fact we find out he's never shot a blaster in combat before, and he spends much of the action on the station recommending surrender, screaming and flapping his arms about, and I suddenly realised, Kaz is Jar-Jar Binks.

We get Leia appearing, but it only really made me sad that Carrie Fisher passed away and we're only getting this bargain basement version of the character. And not only because it's a different voice actor, who doesn't actually do that bad a job at it, but mainly because this isn't Leia as we ever saw her. While I loved Leia as a character in the movies, she doesn't tolerate fools gladly, and I never saw her as the one who would offer reassurances. While I could see her offering a rousing speech, telling Kaz that the Resistance needs every person it can get, that he is needed and no one else is rising to the occasion. The way she tells Kaz that everyone has a place in the resistance, sounds too soft for Leia, too politically correct and lacking in her fiery spirit.

I must also comment on the name of the mineral the First Order was mining, Dedlanite. I know that Star Wars has never been great at naming things (usually characters, if General Grievous and Savage Opress would like to raise their hands), but this name seems ridiculous, it makes blasters, which make things dead, so the mineral is Dedlanite. Just sounds ridiculous to me.

So what do you really think ? : It's a difficult one to review for me, because it does a lot of what I've been wanting Resistance to do from the start, to reveal the build up of the First Order, to show brave members of the Resistance fighting the emerging threat of the First Order. However, it's all just so lackluster and bland that there's nothing here to excite, the script is just ticking the boxes, without any real feeling or spark which would make it entertaining and exciting.

Final Words : Well, that's Resistance on a break until next year, so no reviews for a month. We'll see where it is when it returns, but I have a bad feeling that they're not going to have time, or have the desire to improve what they're putting out. So, see you back here in mid-January for "Bibo"?!?