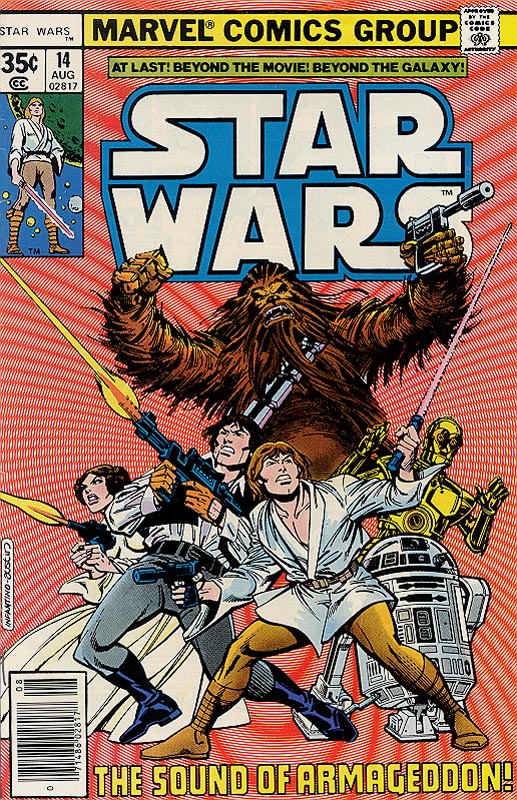 What is it ? : Believing Han is dead, Chewbacca attacks Luke and the Droids, but they manage to stun him, and Luke sets about using the power from the Falcon to bolster the Sonic Jammer to bring Crimson Jacks Battlecruiser down from orbit.
But Han is not dead, he has been rescued from drowning by the Dragon Lords, who want every ally they can get, and explain that the Sea Dragons communicate through Sonic waves, so the Jammer antagonises them into attacking. However the very high levels it is on at the moment is hurting them, and killing their young, the small lizards that infest the Giant Ship.
As Luke continues trying to modify the Falcon, a Dragon Lord boards the ship, and Luke moves to defend himself, only to discover that it is Han returning. He explains to Luke about the damage that the Sonic Jammer is doing, so they move to the Ships weapons to fire upon and destroy the Jammer, only to see that Leia is there with Governor Quarg. She fights Quarg, distracting him long enough to let Luke race up to the rigging and swing in, kicking Quarg and letting him plummet from the high rigging of the Great Ship, which gives Han chance to destroy the Jammer with guns of the Falcon.
However with the Jammer gone, Han realises that Crimson Jacks ship awaits them in orbit.

High Points : The continuing fleshing out of the history and culture of Drexel is really excellent, filling in how the technicians from the scavengers discovered the harm their sonic technology was doing to the Sea Dragons, and were forced out when they suggested working with the natural life of the planet instead of against it. It's especially good how the heroes actions have forced a final showdown, the arrival of them and Crimson Jacks Battlecruiser, making the scavengers use their sonic jammer at higher levels than ever before which is proving fatal to the Sea Dragon's young, and driving the older ones into a rage. Which forces Han into one of the most ethical decisions he's ever made, acting against Luke to save lives.

Low Points : Chewbacca continues to be treated as not much more than a rampaging beast in the story, rather than the honorable warrior that we now know him to be, attacking Luke and comrades enraged by the possible death of Han.

From previous issues, Leia has been treated as an intelligent leader and fighter, however in this issue she's mainly relegated to damsel in distress once more, for Luke to rescue at the climax of the story.

So what do you really think ? : There's not much going on in this issue beyond the information Han is given, the battle between the Sea Dragons and the Scavengers is completely sidelined and barely seen, as the Heroes do everything, taking down the Sonic Jammer and killing Governor Quarg. All the world building they've been doing in this and the past issue is all for nothing really except as backdrop to Han and Luke

Final Words : Although we've got some action promised for next issue in orbit around Drexel, we seem to have pretty much finished with the planet and its history, and it's been an interesting backdrop, definitely something which could fit into the modern Star Wars universe, or any campaign. The amount of background they're building here is impressive, and only 8 issues beyond the end of the original movie and we've had two interesting worlds which could be used without much modification.