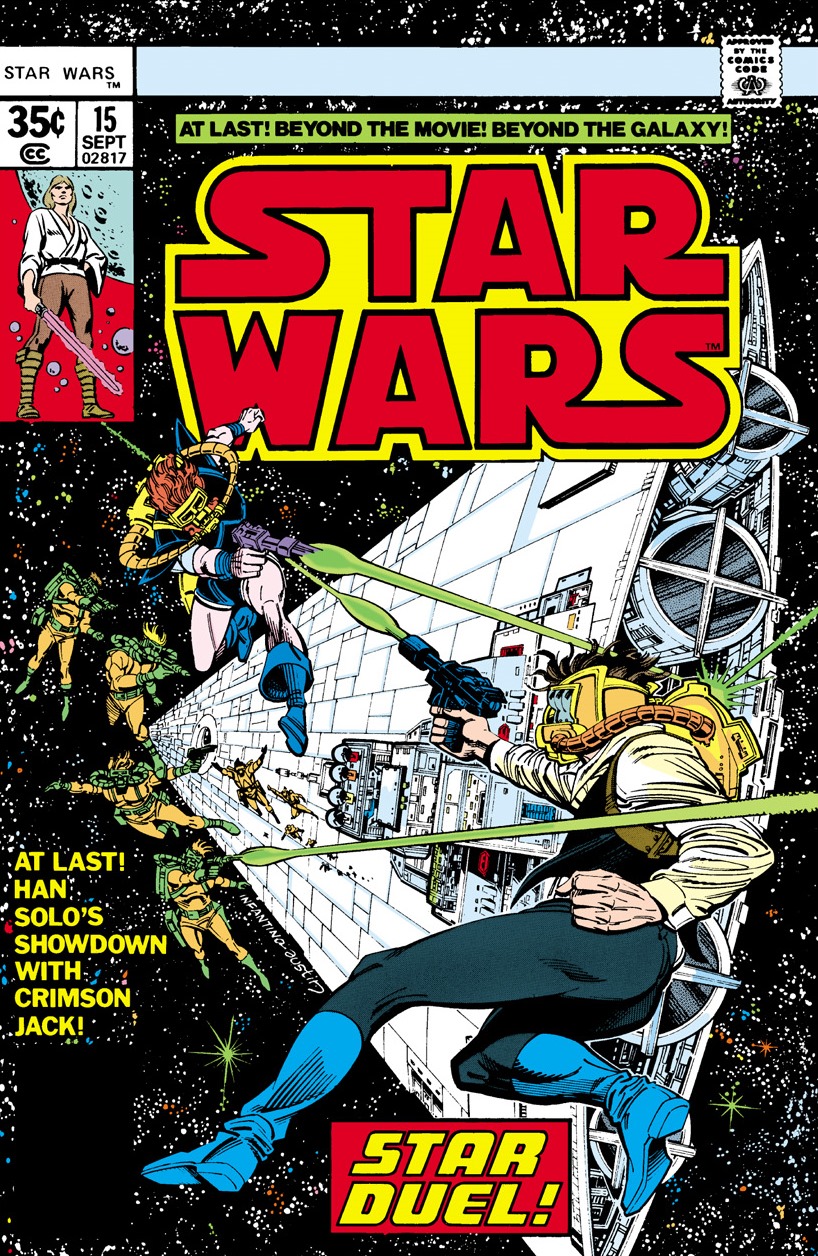 What is it ? : In orbit around Drexel, Crimson Jacks ship has been freed from the Sonic Jammer, and rather than leave he still seeks revenge on Han Solo, however Han sabotaged the fighters and transports before he departed the BattleCruiser, and repairs are taking a while to complete.
Jack orders Jolli to take one of the 3 repaired fighters down to the surface to attack Han, and she boards a modified Y-Wing Fighter. On Drexel, the heroes are still at the Great Ship, now controlled by the Dragon Lords, Han is hesitant to leave the planet, knowing that the BattleCruiser awaits them above, but when Jolli attacks, they all scramble aboard and launch as the grounded ("watered"?, because it's floating not landed?) Falcon makes an easy target for her.
Blasting into space, they are attacked by two more fighters, this time a Tie Bomber and an X-Wing, and Jolli makes a suicidal attack on the Falcon, smashing her fighter into the freighter, crippling both.
With the BattleCruiser bearing down on the Falcon, Crimson Jack gloats to Han, but Han reveals that when they were aboard, Chewbacca deleted all of the Hyperspace Charts from the BattleCruisers computers. The Falcon needs parts from the BattleCruiser to escape, and the BattleCruiser needs the charts from the Falcon or will be stranded in the Drexel system forever.
Jack and Han agree to meet in space, using the BattleCruisers shields for defence, they will head out in just breath masks to make the transfer.
Jolli watches from her crippled fighter, excluded and mocked by Jack for not being good enough, she remembers her childhood, and her father leaving without her because she wasn't old or good enough to go to war with him. She remembers being left alone after her mother died, and she remembers her hatred for men that have mocked her gender and excluded her for being weak.
Han and Jack make the transfer, but Jacks ship has moved away from the Falcon so there is now open space between Han and his ship, and Jack orders his crew out into space with Blasters and Breath Masks to take revenge on Han.
Jolli powers up her fighter, and hating Jack more than Han, she suicides her fighter into the BattleCruisers Armoury, with live warheads aboard the explosion wrecks the BattleCruiser and kills Jacks crew who are still close to the vessel.
Jack turns back to Han, it's down to the two of them now, but Han is faster and guns Crimson Jack down.
Searching the wreckage, they find the remains of Jolli's fighter, and Han kisses the mortally wounded woman, her first and last kiss ever, before heading onto adventures new.

High Points : Finishing off the storyline that started immediately after their telling of "A New Hope" ended, this kills off Crimson Jack and Jolli and finishes both Han and Luke's storylines bringing the heroes together from now on. Which feels contrived, but tidily wraps everything up for future stories, which just feels too neat for me.

I must also comment on what is perhaps the first appearance of a Tie Bomber. They were never shown in the original movie, only appearing on screen in The Empire Strikes back, which wasn't released until 2 years after this comic (although reading up on this matter, it actually appeared a couple of issues ago and I just missed it).

I almost missed commenting on this one, just before Han leaves the Falcon to meet with Jack, he is speaking with Luke and tells him "Now turn your back, so I can kiss the Princess without feeling guilty".
Wow, Leia gets no say in this kiss, we've not found out that Luke and Leia are brother and sister yet, so this is wildly inappropriate in so many ways, but kind of feels more Han Solo than any line he's uttered since they started this comic.

And finally, just a little bit of storytelling which makes a load of sense, as the Millenium Falcon comes under attack, and Han dives into the sea to swim aboard and get it launched, Luke comments with some embarrassment to Leia that he's been hiding since he arrived on Drexel that he doesn't know how to swim. Which for someone raised on desert world, only makes sense.

Low Points : The story is contrived throughout, not only as I mention above to finish off all the storylines which we've seen developing since the comics started telling new tales, but also to bring it down to Han and Crimson Jack in a gun fight. It would have been far better to have left Jack and Jolli as looming villains somewhere in the background to return at some point. The meeting in space just makes no sense apart from bringing this down to just the two characters, as soon as Han hands over the Hyperspace charts, there's nothing to stop Jack's ship from blasting the Falcon into oblivion.
But we never even get that far, the two never seem to make the transfer, Jack just separates Han from the Falcon and brings in his men to kill him, the comic mentions getting one of the droids to collect the module the Falcon needs from Jack's body, so the two decided to kill one another without actually finishing what they'd come out into space to do.

And one final comment about Jack continuing to wander around in his Swimsuit, even heading out into space with bare legs.

So what do you really think ? : While the part where we see Jolli's origin story is excellent, I'm not a fan of the rest of this issue, everything is just forced and contrived with none of the excellent storytelling we've seen in these comics over the past few issues. Jack's treatment of Jolli, which makes her target him as the subject of her rage, comes from nowhere, and just conveniently puts her into the position of rescuing the heroes.

Final Words : Next Issue: The Hunter.

So we're coming up to the experimental issue of the comic, which caused such an outcry at the time, but more on that next time.