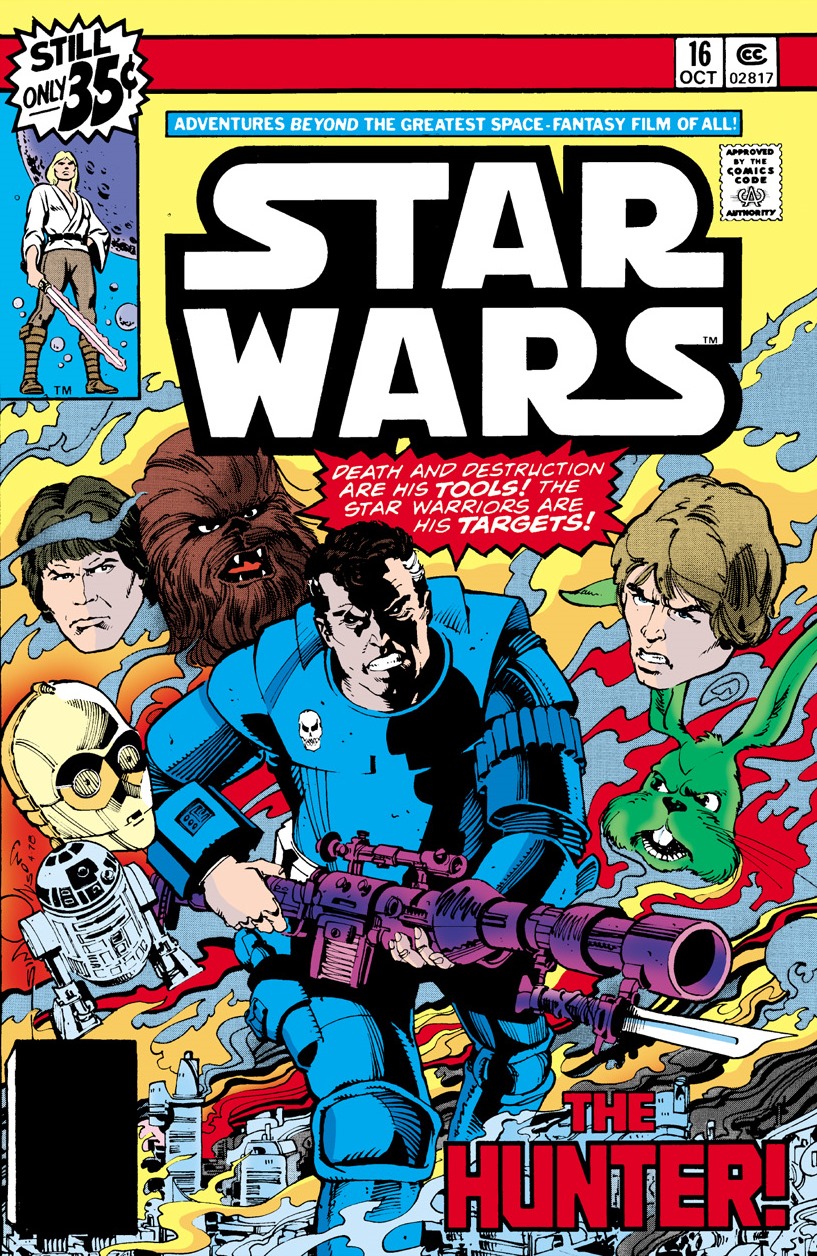 What is it ? : A neutral medical station in the Telos system comes under attack by mercenaries with a special dislike for droids, rounding up all the droids on the station and destroying them as well as the central computer of the station. Before it is destroyed, they get various records, including a holo communication about the destruction of the Death Star by Han Solo and Luke Skywalker. However, they also encounter the delirius Don-Wan Kihotay, muttering about the fight on Aduba-3, about Han Solo, Jaxxon, and the farm boy and his droids.
Thinking they have found something of great value, the mercenaries set off to find those mentioned, and decide that Jaxxon, as a 6 foot green carnivorous Rabbit will be the easiest to find. They find him at the end of a nights drinking with another of the Star Hoppers of Aduba, Amaiza, and ambush and begin torturing him for information on the location of Jinn. Amaiza rescues Jaxxon, but mentions Jinn's location before all the mercenaries can be finished off, and one flees with that information.
Jaxxon and Amaiza board Jaxxons ship, the Rabbits Foot, and head back to Aduba to tell Jinn about the Mercenaries, who is somewhat doubtful about them looking for him, as he has settled down and is just a peaceful farmer now.
During the trip to Aduba-3, the leader of the Mercenaries, Valance, reveals that he used to work for the Empire, but after a Rebel raid he was injured requiring long surgery on the station at Telos. He was unable to return to duty, and since then has hated droids, and people who are close to them. Because of this, the story of Luke Skywalker, a farm boy who has droid companions has enraged him, this combined with the massive bounty for the man that destroyed the Death Star has led him to seek Jinn, a farm boy companion of Han Solo's who consorts with droids, thinking he is Luke.
When they arrive in the Aduba System, the Rabbits Foot launches and engages them in orbit, but is damaged and forced to crash land back at the village. Jaxxon and Amaiza fight the mercenaries, but JInn herds the villages Bantha's against them, and they defeat the mercenary forces.
The capture Valance, but after correcting him about Jinn's identity, he distracts them with a blaster built into his arm, revealing that the surgery which saved his life also converted him into a Cyborg, with a half mechanical face, and a replacement arm. He retreats to his ship and flees, swearing to track down the real Luke Skywalker.

High Points : Despite having Han, Leia, Luke and the Droids on the cover, they only feature briefly in a retelling of A New Hope in the Imperial communication record that Valance retrieves.
This isn't a bad thing however, allowing the story to be mainly told from the point of view of a new villain, and to feature a return of the survivors of the Star Hoppers of Aduba, Jaxxon, Amaiza, Jinn and Don-Wan Kihotay. Kihotay seems to breath his last (although I've thought that before), and we get to see that Jaxxon and Amaiza have hooked up as partners, if not as a couple, with the two earning money to fix up Jaxxon's ship, The Rabbits Foot.
Speaking of which, the Rabbits foot is an excellent looking vessel, reminiscent of the Millenium Falcon without being a total clone.

The Story of Valance is also quite interesting, his raid on the Medical station doesn't make sense until nearly the end of the issue, when it is revealed that he is a Cyborg, who hates that part of himself, and hates droids because of that. Destroying the droids who did the surgery on him, and the records of what was done, is the main reason for performing that raid, and the information they find is merely an excuse for the destruction he performs.

Low Points : The cover is a bit of a lie, showing Han, Luke, Leia and the Droids, but it does point out that Valance is out to get the heroes, and even if he's looking for totally the wrong person throughout this issue, his ultimate target is indeed Luke. And there's not a whole load more wrong I can point at in this issue, apart from perhaps the mercenaries are dealt with a little too easily by a simple stampede of Bantha.

So what do you really think ? : I enjoyed this issue, especially as I like Jaxxon, so seeing him back along with Amaiza and the introduction of his ship was a joy for me. I liked seeing a story which comes about because of the heroes of Yavin, but not totally involving them. A nice idea which wasn't to happen again.

Final Words : After this issue was published, the Marvel letters page was hammered by complaints, and demands that this not happen again. Readers wanted Han, Luke and Leia in their Star Wars, and they weren't going to accept anything else. Which is kind of sad, as even back then I really liked some of these characters who'd been introduced, and I liked seeing their further adventures in addition to the further adventures of the movie characters.
Oh well . . . .