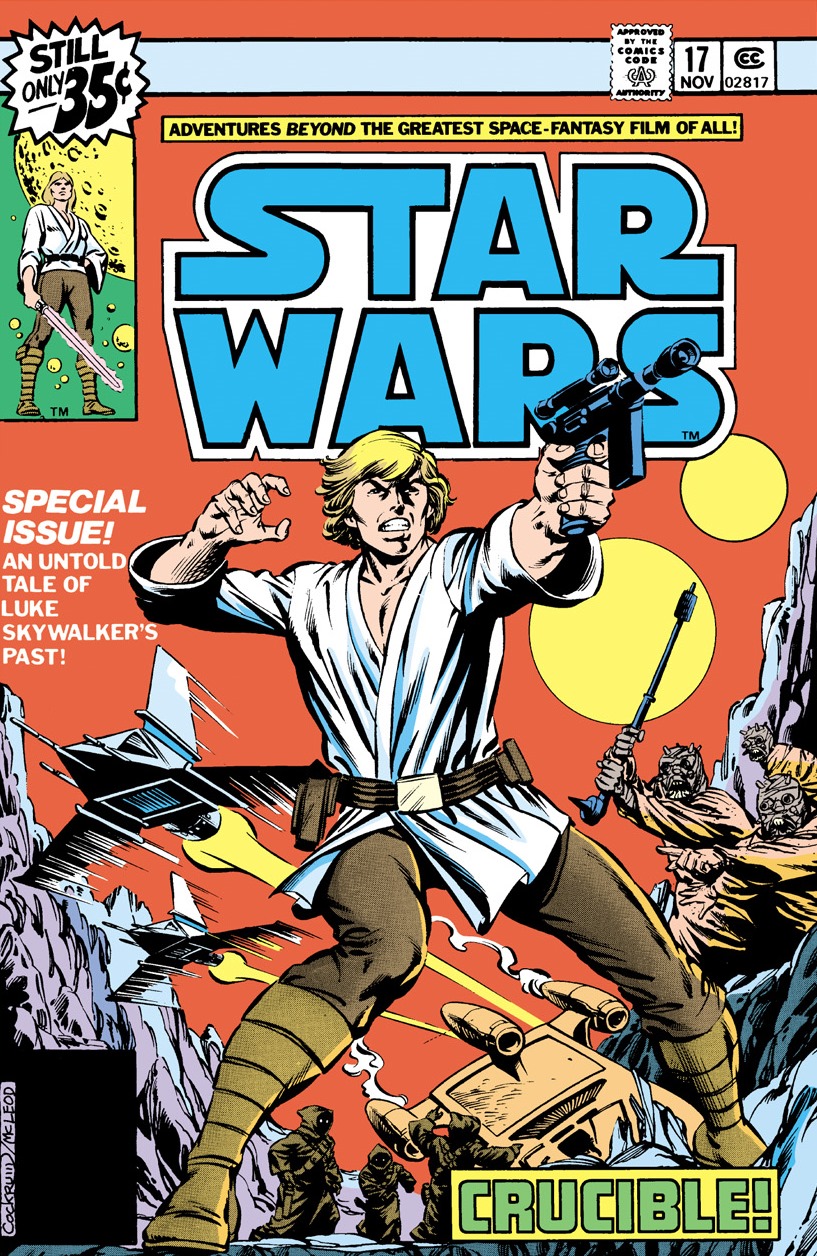 What is it ? : While flying through space in the Millenium Falcon, Luke takes a night shift at the controls, and his mind drifts back to an incident back on Tatooine before the events of A New Hope.
Around a year before the events of A New Hope, Luke wants to attend a party celebrating his best friend, Biggs Darklighter leaving for the academy, but his Uncle doesn't want him to attend. Aunt Beru talks Uncle Owen into it, saying that Owen regrets letting his brother (presumably it's speaking about Lukes father) leave. The celebration is actually a race of T-16 skyhoppers in Beggars canyon.
They race down the canyon, and Biggs is proven to be a better pilot, but Luke is improving quickly, however while they party afterwards, one of their friends stumbles in, with information about Tusken Raiders on the rampage nearby.
Smugglers have poisoned a spring where the Sandpeople get their water, and they are out for revenge.
The Tuskens attack the camp, and every scatters with Luke and Biggs sharing a T-16 after Biggs in wounded and poisoned by a Raider. The only way that they can get to help fast enough to save settlers nearby, and before the poison kills Biggs, is to take a shortcut through the Diablo Cut, which no one has navigated successfully before.
Luke successfully pilots his way through, even under fire from Tusken Raiders, but his T-16 crashes at his Uncle and Aunts farm, letting Biggs get treatment, and the local militia be rallied against the Tusken Raiders.
As he rests afterwards, he feels as if he has passed some kind of test, not winning an unimportant race, but saving his friend and helping turn back the attack by the Tusken Raiders.
Aboard the Falcon, Luke continues to remember his adventures on the Death Star and beyond, just before he is roused by Han Solo, taking his turn at the controls, apologising for leaving Luke so long at the boring job of sitting at the controls while they are in deep space. Luke tells him that one day being at the controls of a starship may be boring, but not yet.

High Points : The use of Biggs Darklighter, Beggars Canyon, and the Sand People are all excellent, remembering at the point that this comic was released all the official content we had was the original cut of the movie, in which only Biggs only featured during the Death Star battle and we had no dialogue setting up his and Luke's relationship back on Tatooine.
This is a great little story which fits extremely well into Lukes past, and provides some wonderful character growth, with him moving from just a pilot interested in flying around Beggars Canyon and having fun with his friends, into the role of a hero, rescuing his friend and helping save lives in a Tusken Raider attack.
Even the small amount of information we're given on the Tusken Raiders works extremely well, with their raid on the settlements only being triggered by Smugglers poisoning one of their wells. Meaning that they are not just savages attacking at random, but are seeking revenge on what they assume is an attack on them.

Low Points : There's a couple of problems with the backstory, because not everything was set out properly by this point. The story reveals that Uncle Owen is hesitant to let Luke leave, even for a party with his friends, because he let his brother leave to go off to the Clone Wars where he died. We now know that Anakin was only Owens step brother, and never lived with them as a family, so this explanation makes no sense now. However at the time, it matched what we knew.

And I must mention that Aunt Beru has seriously changed her looks, going from an older lady in the movie to a much younger one in this comic, with a totally longer hairstyle. Amazing the aging effects of a year in the desert.

So what do you really think ? : Even if some of the backstory has been changed over the years, it's still quite amazing how well this fits into Luke's background, and it's a great little story as well, not much else to say. A brilliant little one off story, which fleshes out a lot of the background for Luke.

Final Words : Some of the more interesting parts of the Marvel stories are when they're telling a tale with only one or two of the heroes, the Aduba-3 storyline without Luke and Leia was excellent, and now this tale with just Luke alone is equally gripping. The comics seem a little too busy when they've got to handle story with all of the heroes, jumping between them and giving each very little attention since each issue is so short.