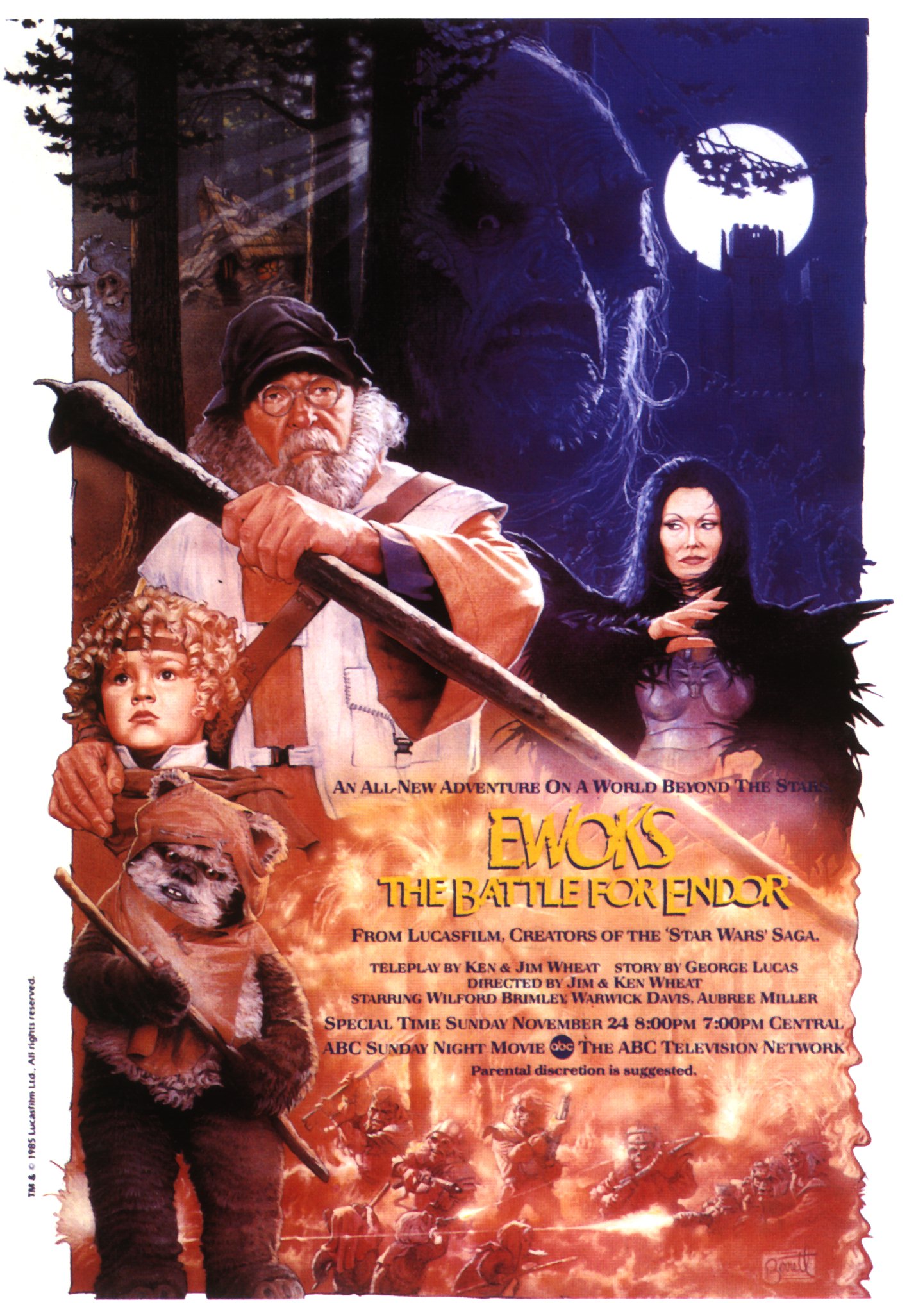 Ewoks: The Battle for Endor

What is it ? : So, after reviewing The Holiday Special last Christmas, I decided that this year I should review The Ewoks Adventure: Caravan of Courage . . . But I couldn't find a copy at short notices, so here we are with Ewoks: Battle for Endor.

So, Cindel Towani, a young human girl, and Wicket the Ewok are picking flowers in the forest of Endor while Cindels father finishes up repairs on their Star Cruiser so they can finally leave the moon after the events of Caravan of Courage.
Wicket senses danger as they approach the Ewok Village (which isn't treetop based as it was in Return of the Jedi), and the settlement is attacked by Raiders. The Raiders kill Cindels mother and brother, and she flees to her father, only to see him murdered by the leader of the Raiders, Terak, and a witch named Charal who are seeking "the power of the stars" which they know the sky people have. With his last breath Cindels father tells her to flee, but Charal transforms into a Raven and hunts her down capturing her, as Terak takes the power supply from the Star Cruiser.
She reawakens in a prison wagon along with a number of Ewoks including Wicket, and the Ewoks soon prize part of the floor open, but the hole is too small for them all, so Wicket and Cindel being the smallest escape, and are chased onto a mountain ledge by a couple of pursuing raiders.
The duck into a cave, before a rockfall kills the raiders and traps the pair inside the cave, who follow the tunnel only to find it emerges on a sheer rock face on the other side of the mountain. Wicket begins building a glider, but just as he finishes a Condor Dragon attacks, and flies away with Cindel. Wicket launches his glider, dropping rocks onto the Condor Dragon, and freeing Cindel, but the glider is damaged and they crash back into the forest where they spend the night in the roots of a tree.
They are awoken the next morning by a Teek, a fast moving creature which annoys Wicket but delights Cindel, and it leads them back to a house in the woods. They assume it is deserted and decide to make it their home, but later it's owner a human named Noa, arrives and sends them away. Seeing them struggling with a fire, he later invites them to stay the night, letting them sleep in his bed. The next day he leaves, and Cindel and Wicket follow him, discovering a nearby Star Cruiser hidden in the trees, Noa catches them, but they bond over the people they've lost, as Noa lost his friend who arrived on the ship with him, who left to find a replacement power supply since theirs was lost in the crash on Endor.
Terek and Charal have a falling out about controlling "the power", and Charal is sent to capture Cindel to discover how to manipulate it. She finds the house in the forest, and transforms herself into a beautiful woman who sings a song Cindel remembers her mother singing, luring the young girl into a trap and capturing her, taking her back to Tereks citadel.
Cindel is imprisoned with the captured Ewoks and given the Power Supply from her family's ship and told that she has until dawn to show them how to use the power of the stars.
Noa, Wicket and Teek set off in pursuit, and reach the citadel, sneaking in and freeing Cindel and the Ewoks, they flee and get back to Noa's Star Cruiser, which they begin to power up using the Towani's power supply. However, they must prepare a defence of the ship until repairs and adaptations can be made.
Using the Ewoks tricks and traps, in addition to the weapons of the Star Cruiser, they fight the Raiders and hold them off. However Cindel leaves the safety of the Star Cruiser when she sees Wicket in danger, and is captured by Terak.
Terak offers to trade Cindel for the power supply, but Noa and he end up fighting, but Cindel tells Wicket to do something and he fires a stone which hits Charal's magic ring which Terak is carrying, and it turns him to stone.
With the Raiders beaten, and the Star Cruiser repaired, Noa and Cindel wave goodbye to the Ewoks and the ship lifts off and blasts it's way into space.

High Points : They've learnt from Caravan of Courage, and Cindel isn't quite as annoying, and the story is fairly interesting, with the raiders being ancestors of a group which crashed on the planet. They've heard rumours of the power of the stars which allowed space travel, which was brought to the fore by Noa's companion being caught and tortured by them and telling them he was seeking this mystical power that they don't really understand.
They're equipped with Blasters, but most of their knowledge of technology is based on the stories that have been passed down to them, becoming legends of power they don't really understand the truth of.
Which is quite a clever idea.

I also was quite impressed with Teek, who moves at high speeds, also a non-native of Endor, his species are seen as intruders and an annoyance by the Ewoks, but he proves useful throughout, and while he looks mentally deficient, he isn't quite as annoying as some characters in the Star Wars movies.

And while it's done to make the movie more watchable for the kids, the fact that Wicket speaks basic throughout the movie kind of works given his close relationship with the Towani's, and that the other Ewoks mainly still speak their own language.

Finally, I must comment on Wilford Brimley as Noa, he's brilliant, and provides some solid acting which grounds the entire story. While everything around him is bit amateur, he's a professional and drags everything up slightly providing a very solid and watchable core to the entire story.

Low Points : This is Star Wars done on the cheap, the riding beasts are animated, but just look cheaply done so in comparison to the Trilogy movies, or even further back to Ray Harryhausen work decades before. The Tree Village of the Ewoks, is now just some huts in a clearing, even the fact that some of the raider just ride horses, not even horses in makeup to appear alien, just horses.
And that's the main problem with this, the story is alright, especially as it's just a kids movie. But the cheapness of the production just drags it all down and stretches credibility.

And finally, while it's a kids movie and I don't expect serious drama, Cindel watches her entire family butchered before her eyes, and doesn't even stop for a moment. She doesn't grieve, she doesn't cry, she barely even mentions them again. The entire reason that the family dies is so she can be on an adventure with Wilford Brimley and Wicket the Ewok, and they need her parents and brother out of the way to tell that tale, so they die. It's not a emotional moment, there's more emotion portrayed by the Ewok in Return of the Jedi when it's friend is killed in the battle (I'm sure you can picture the scene), which since it's a young girl watching her parents murdered, you would think the director would want some emotion in there, but nope, they might as well have just taken a trip down to the shops for all the emotion the movie communicates.

So what do you really think ? : So, the Ewoks movies are generally considered to be one of the low points of the Star Wars Franchise, just cashing in on the child friendly Ewoks and the emotional credit the original trilogy had generated.

But are they really that bad?

Not really. They're not great, they're very childish, but they're kind of alright for that.

But. They're very very cheaply done. If you watch any fan film, you can tell the cheap ones, and you can tell the ones where they've spent some time and money on them. Battle for Endor comes across as minimum time and effort. They had some Costumes lay around, so they cashed in and made a movie, and that shows on screen I'm afraid.
But for cheap, it's kind of watchable.

Final Words : So that's The Battle for Endor, I'll have to go back and review Caravan of Courage at some point, but that's another story, for another time, probably next Christmas. . .