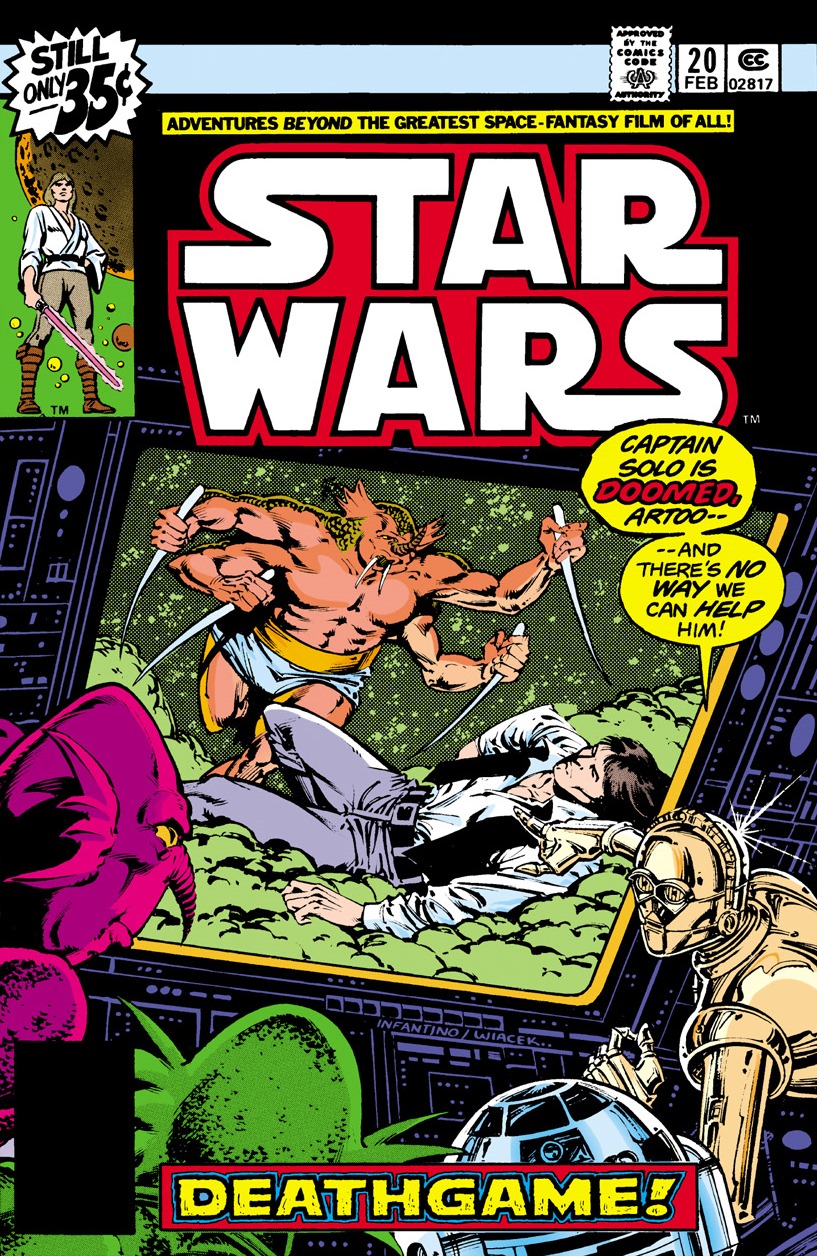 What is it ? : Those aboard the Wheel watch in shock as a Rebel X-Wing attacks a Pleasure Yacht nearby, Strom's Cruiser scrambles Tie Advanced which deal with the intruder, and Leia expresses anger at Greyshade for taking part in this sham display. But part of her display of anger, she uses to conceal a knife from the meal she was sharing with him.
Greyshade leaves her under guard of Master Com, and heads out to the Cruiser to meet with his business "partner" Strom and discuss the Imperial takeover of the station which they are attempting to arrange, but the discussion turns to the fates of Han Solo and Chewbacca who are now both gladiators in the Wheels games.
Meanwhile R2-D2 and C-3PO are both in the Wheels droid storage facilities, having been pawned by Han Solo, and are about to be memory wiped. But Master Com, wanting to study their loyalty to Luke and their ingeniousness, abandons his post to stop the mind wipe and recover the two droids, who immediately head back to Medical to check on Luke, who although apparently tranquilised has broken his restraints and fled.
Leia uses the knife she hid to prise open a panel and short out the controls on her door to escape from her confinement in Greyshade's quarters. While Han discovers that he has been placed into one of the most dangerous categories of Gladiator. He enters the arena only to discover his opponent is a much larger creature than he, armed with poisonous daggers, against the electrified mace and shield he has been provided with.
The mace proves to be useless against the larger creature, and as Strom uses the luxurious quarters that Greyshade has provided him with on the Wheel, Han uses the stunning capability of his shield to cause his opponent to stumble and snag himself with his own dagger, collapsing dead on top of him, much to Greyshade's and Strom's chagrin. However, Greyshade assures Strom that this was merely a preliminary event, and the main event will prove fatal to Han.

High Points : The story hangs together well, even if this issue does feel a little pointless. The interest that Master Com has shown in the droids, and the mind wipe ordered for them last issue, prove to be the distraction Leia needs to escape.


Low Points : I'm not overly impressed with this issue, the main event in the issue is Han's gladiatorial debut, and it's just a little contrived. The shield and weapon have no effect on his larger opponent, until he frantically uses the shield against it's knee armour, which conducts the stun effect causing it to stumble and stab itself with it's poison dagger.
Why shouldn't the effect work until the last second? No reason except drama, which feels contrived and poorly written.
Other than that, there's not a lot happening, the X-Wing attack isn't really explained. Where did Strom or Greyshade get their hands on an X-Wing? Who was piloting it when it is destroyed? An Imperial Pilot they sacrificed? There's no background information provided for this attack at all.
Apart from that, we've only got a bunch of talk, and none of it really advances the plot, since it's mainly just Greyshade and Strom rehashing their plan and what has already happened.

So what do you really think ? : I suppose there's a few things set in motion in this issue which will pay off later, Han moving onto another stage of the arena, Leia's escape, whatever has happened to Luke. So while nothing too much happens this issue, it's perhaps laying the foundations for later issues, so I'll not be too harsh in my evaluation, as it may have its place in the longer storyline.

Final Words : The first issue of this comic I've been completely "Meh" about, the big action set piece of the issue doesn't pay off in a satisfying manner, there's a lot of talk without much new information being revealed, and while it keeps the heroes split up, which would normally provide new and interesting situations for them, Luke and Chewbacca aren't even seen in this issue at all.