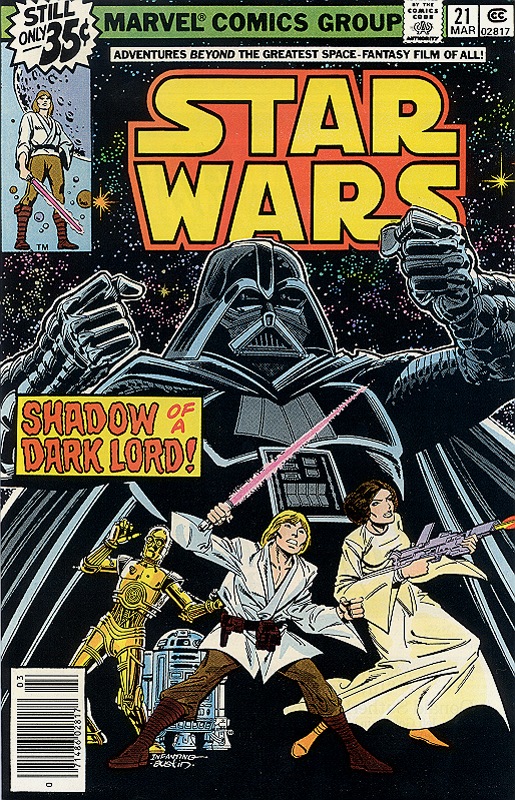 What is it ? : Leia has escaped from Greyshades quarters, and finds only a single guard between the command tower and the rest of the station, she lures him close by crying for help and pretending to collapse, grabbing his weapon when he comes to help.
Interrogating him, she discovers that the reason he is alone is that the Gladiatorial games are on, and that the guards were needed in the casinos to keep order.
Leia moves on, remembering that Han had suggested meeting up at the Crimson Casino if they were seperated.
The story flashes back several hours, to when Luke is restrained in the Bio Bed receiving treatment, in his mind he sees Obi-Wan in deep space, who warns him that he has no defence against who is waiting for him, not his blaster or his father's lightsaber. Luke moves on through the starfield and encounters Darth Vader, shooting at him ineffectually he then swings his lightsaber brutally attacking the Sith Lord to no effect, he shouts for Ben, but Ben's image clarifies into Leia, accompanied by C-3PO and R2-D2.
She tells him how she retrieved the Droids from the Crimson Casino, and then heard a riot alarm only to find Luke here, standing among a group of dead Wheel Security Guards.
Luke tells her when he was meditating on the Falcon, his mind reached out through the force only to encounter another force user so terrible that it made his mind want to recoil and hide, revealing to her he sensed Vader alive and hunting for them.
The story then moves to Darth Vader, who is hunting down Rebels on the planet Ultaar, only to discover someone else has attacked them first. Interrogating a survivor, he discovers that the cyborg bounty hunter, Valance is hunting for the Rebel boy with two droids who destroyed the Death Star. Vader realises that he has a rival in the hunt for Luke, and contacts the captain of his Star Destroyer, Captain Wermis, who is condescending towards Vader, but reveals that earlier Vader asked them to track a ship Vader sensed a Force User aboard as it passed them in Hyperspace, and it's course led it to the Wheel. Vader orders them to head there next.
The story then cuts to Greyshade being informed by Master Com that Leia has escaped, when pressed on why he wasn't with her as ordered, he reveals that he had interest in C-3PO and R2-D2 and their friendship with Luke. Master Com reveals that if droids can have friends, then his must be Greyshade. This disturbs Greyshade, who returns to his meeting with Strom watching the Gladiator fights.
Which are revealed to just be a distraction to Strom, while Wheel Security raid his cruiser, killing all aboard to retrieve the Wheel Profits Strom and his men had stolen, while being observed by Luke and Leia.
Finally the issue swaps to Han, who is being healed from his last fight and prepared for his next one, when he expresses an interest in just taking his money and leaving, they reveal that he has earned enough to pay off his fines and be a free man, but the docking fees on the Falcon and the money for the pawned Droids remains unpaid, so his only way off the station would be on an imperial transport taking slaves to the Spice mines of Kessel. So Han exits into the next fight, only to discover it is a massive free for all, which only one can survive, and Chewbacca is one of the other competitors.

High Points : Well, after finding the last issue a little lacking in storyline, there's load happening in this one, especially with the introduction of Darth Vader into the story, not here yet but immanent. His presence being the cause of Luke's coma is a brilliant addition to the story, and both makes him more menacing, but also adds to the mythos around the Jedi and The Force.
Greyshades total betrayal of Strom is a surprise, but a great one being totally in character for him. And Master Com revealing his thoughts on being friends with Greyshade is equally surprising and very intriguing.

Low Points : Firstly a minor complaint, the coincidence of Leia encountering the Droids at the Casino suggested by Han issues previously stretches credulity, especially as if is just hand waved away between scenes. We don't get to see Leia in the Casino, how she avoids the security there, or any details of finding the droids, it's just brushed away with her saying she found them there.

But the major what the hell moment of this issue was the bodies surrounding Luke when he comes out of his trance. In the trance he is fighting Vader, slashing his lightsaber about in brutal but ineffective attacks on the Sith Lord. And then it is revealed that all this time, security teams from the wheel were called to deal with him slashing his lightsaber around and he slaughtered them all.
Wow, Jedi Fighting Trance? or Psychopath who kills while swiping at a non-existent opponent, I'll leave you to decide.

So what do you really think ? : While none of the storylines I found particularly gripping, at least there was plenty going on. The story nips along at a good pace, jumping between characters and beginning to bring everyone back together, with Luke, Leia and the Droids now operating together, and Han having at least encountered Chewbacca even if they are being forced into a deathmatch.

Final Words : While the story is wanting me to worry about how Han and Chewbacca will avoid killing each other, that's not at all what I'm interested in. I'm fascinated by the Master Com and Greyshade relationship and where it goes now that Master Com is becoming more than just a droid.
And I really want to see Strom's reaction to having his entire crew slaughtered and his treasure stolen. There are other Imperial ships docked at the station, so he's not totally without aid, but will he react fast enough before Vader arrives, who is not likely to be forgiving to a captain who has allowed his crew to be lost while he was distracted watching Gladiator fights. Strom seems a fairly interesting character, but I can't really see a way he would survive an encounter with Vader without him having some kind of victory to compensate for his loss.