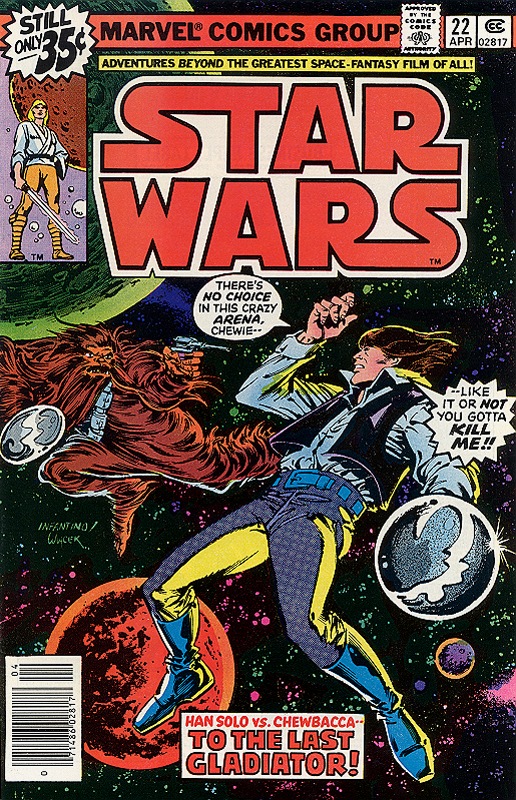 What is it ? : So Chewbacca and Han enter the arena for the finals in the Gladiatorial battles they've signed up to, which is to take place in an environment which appears to be space with various planetoids floating around with the competitors. Han discovers that his weapon is deactivated, and he only has his reflective shield to use in the fight, and begins reflecting assailants attacks at other gladiators, and at the planetoids which are explosive, taking down opponents while working with Chewbacca.
Meanwhile, Luke, Leia and the Droids have trailed the Wheel Security guards they spotted looting Strom's patrol ship, and discover they are taking the treasure to Greyshades personal ship, however the guards spot Luke and attack.
Greyshade and Strom are drinking and watching the arena battle, however Strom realises that Greyshade is just trying to distract him from something, but before he can do anything, he succumbs to the drugs in the drinks that Greyshade has been feeding him.
Greyshade heads to his ship, and ambushes Leia, but wants to make a deal, to save Luke's life, but also to avoid any damage to Greyshades ship. He'll arrange for Han and Chewie to survive the gladiator fights, return the Falcon and expose the Empires attempt to take over the wheel, steal profits and to frame the Rebellion for it, if she gives herself to him.
The story cuts away to Vader aboard his Star Destroyer, ordering Captain Wermis to push the ship harder, when Wermis complains about endangering his ship based on a whim, Vader force chokes the man and forces him to crawl on the floor.
Back in the arena, Han and Chewie are the last 2 competitors, and Han knows that only one of them can survive, so tells Chewbacca to blast him. Chewbacca pauses, then follows his friends request, shooting Han.
Leia sees this on the security systems, and tells Greyshade he's got a deal, but tells him he's won and empty and bitter prize.

High Points : Once again, not a lot happens this issue, although what little that does occur is vital to the plot, and it all rushes past very quickly.
While most of the action takes place in the arena, most of the interesting stuff happens outside it, since we know that Han and Chewbacca are going to be victorious, it's just a matter of how, and that's revealed very quickly when they lure their opponents into explosions from the planetoids.

Low Points : It feels very much like they're just wrapping all of the plot lines up in time for Vaders arrival, Greyshade is planning to leave, Strom is unconscious, and the heroes are trying to get together, just in time for Vader to arrive and throw all their plans into chaos. While there's a possibility of some interesting plots still to occur (Master Com is the computer for the Wheel, and claims that Greyshade is it's friend, so how will it feel and react to him leaving?), none of that happens here.

So what do you really think ? : Very much a case of just moving pieces around and putting them into place for the next issue, nothing much seems to happen here. We've got the shock shooting of Han by Chewbacca, but at a guess Chewies weapon will be drained by all of the fighting and will have been incapable of a killing shot.
One of the most interesting bits of the story, the "alliance" of Strom and Greyshade seems to have ended in Greyshades favour, but merely by Strom being drugged which comes from nowhere, having not been mentioned or hinted at before.

Final Words : Well, hopefully we get something a bit more interesting next issue, instead of just the bland "action" they filled this issue with.