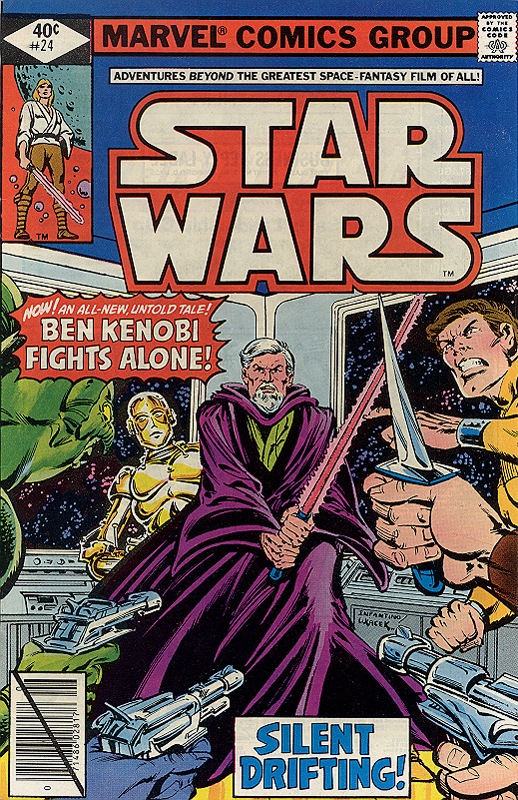 What is it ? : This issue flashes back to before the heroes arrived at the wheel, during their journey there. The Falcon is flying through space when it is intercepted by two Tie Fighters, and are concerned that if they fight back the 2 fighters will take off in seperate directions, escaping the Falcons jamming field and informing the Empire of their location.
So Chewbacca lowers a section of shielding, luring the Fighters into attacking, and as they do Han detonates an explosive device concealed in the cargo bay, which makes the fighters think that the Falcon is disabled. They move in for the kill, giving a chance to fire on both and the two fighters are destroyed.
Luke is impressed by the tactic, but Leia is cooler in her praise, saying she remembers hearing of Obi-Wan Kenobi using the same tactic, and begins telling a tale.
During the days of the Old Republic, Obi-Wan Kenobi was taking a passenger flight across the galaxy to Alderaan, when he is approached by a droid which is travelling there as well to begin service with "Prince" Organa and wishes to travel with Obi-Wan as some passengers object to having a machine amongst the passengers instead of travelling as cargo.
Obi-Wan agrees, but this almost instantly draws the ire of another passenger who ends up attempting to stab Obi-Wan from behind, however Obi-Wans jedi reflexes cause him to activate his lightsaber and the opponent impales himself of in as he leaps to attack.
This encounter is observed by another passenger, Augustus Tryll, who offers Obi-Wan a drink from his personal mixing machine, but this is refused as Obi-Wan recognises the passenger as a trader in stolen goods and slaves, and he retires to his cabin for the night.
He is awoken by the crew of the vessel during the night, and asked to attend the captain on the bridge. The vessel is passing through the Merson Asteroid Field, and the Merson who live their are antagonistic towards the Republic and raid passing vessels. The Passenger liner as usual has shut down all non essential systems to sneak through the field, but Merson Scout ships have managed somehow to locate them.
The captain asks Obi-Wan to take charge since he is a General experienced in battle, and Obi-Wan uses the same tactic that Han used earlier, shutting down the liners engines after receiving some damage, and letting the ship drift to lure the scouts into the weapon arcs of the larger ship.
He realises that the Merson vessels are detecting something aboard the ship, and that more scouts will locate them and will not fall for the same trick, but he hears that the passengers are panicking, so heads back down below to calm them. Where he finds they have turned on Tryll, having decided that he has sold them out to the Merson as slaves.
Obi-Wan defends the man, but turns and attacks his drinks processing machine, realising that since it is registered as a food device, it was considered essential and not shut down with all other electronics, and either purposely or accidentally it is sending the signal that the Merson's are tracking.
With it destroyed, the liner crosses the field undiscovered by further Merson Scouts, and the droid travelling with Obi-Wan makes it to Alderaan and tells the story to a young Princess Leia, who now recounts the tale to the heroes.
Han scoffs that he didn't need any mystical force to do the same trick, and the heroes travel on to adventure.

High Points : I was worried about this tale not really matching up with all of the continuity that we now know of Obi-Wan since the prequels and the Clone Wars series have since been released. However, it really doesn't fare that badly, the tale of Obi-Wan taking control of a passenger ship during a raider attack doesn't seem out of place at all, and any details which are wrong can be put down to this being recounted from a childhood story told to a young Leia.
But apart from that, it's a pretty standard Sci-Fi tale of a ship being tracked through an asteroid field, although I must complement it for not taking a side on whether Tryll's device was emitting the signal on purpose or not, thereby making the reader decide whether Tryll was selling the passengers and vessel out to the Merson, or whether it was just a badly manufactured device which the Merson could track.

Low Points : This must have been during Obi-Wan's otherwise unseen Purple bearded phase, which not only is a goatee, and as mentioned, Purple, but it's also particularly combed forwards from his chin.
I mention above that this is standard Sci-Fi fare, and one of the reasons it feels that way is the lack of Alien species in it. In Star Wars we usually always see a variety of different species, which has been carried over the the comics. But in this story, it's all humans only, which makes it seem far more like any other Sci-Fi tale of the time, and less Star Wars.


So what do you really think ? : The story is alright, and Leia is stretching a point of similarity to score points against Han. Obi-Wan shuts down the vessels engines after an attack to lure enemies in, but Han deliberately gives the Tie's a target to shoot, and then provides them with an explosion to think their attack is successful in crippling the Falcon. While basically the same trick, Han's definitely has more theatrics, and Leia is simply trying to stop Luke hero worship of the smugglers skill by talking the trick down.

Final Words : The fact that this is a flashback to a flashback seems a little odd, but the fact that it's "an untold story of Obi-Wan" is interesting, but turns out to be ultimately a little dull.