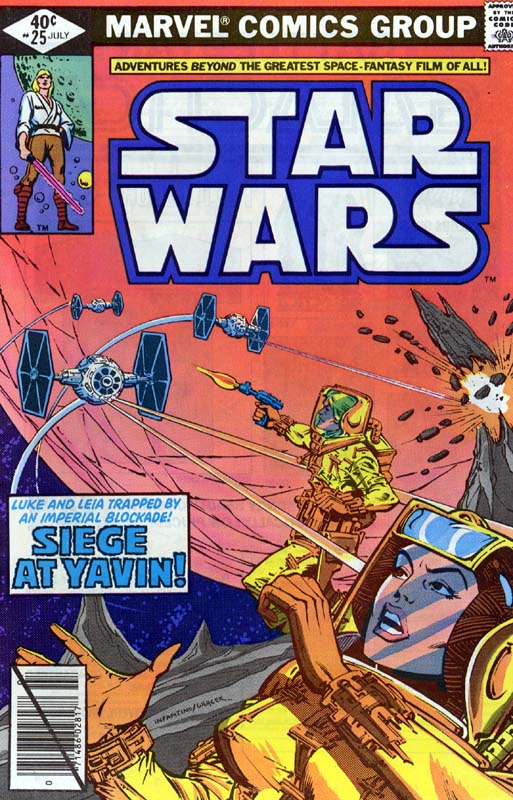 What is it ? : At the Rebel base at Yavin, Tie Fighters attack and destroy the observation platform overlooking the jungle, and the base scrambles some X-Wings which are swarmed by other Tie Fighters as soon as they leave the atmosphere. General Dodonna is confused as to how so many Tie Fighters can be there as no Capital Ship has been detected to act as home for the Tie's.
Meanwhile, Luke and Leia are trading in Simon Greyshade's Yacht for a more inconspicuous transport ship, and they spot a TaggeCo Ming Explorer departing the planet, the ship trader tells them that TaggeCo has reportedly discovered spice in the same sector of space as Yavin and the Empire has sealed off the area to allow them to exploit it.
Departing the planet in their new ship, Leia tells Luke that there is no Spice near Yavin, as the Rebellion checked for it to ensure avoid spice miners coming near the base, and they drop into Hyperspace trailing the TaggeCo vessel very closely.
Aboard the Mining Explorer, Baron Orman Tagge is practicing with a Lightsaber, and explains that he was blinded by Darth Vader with one and now has to use Cybervision, so has mastered the weapon. He plans to defeat the Rebels at Yavin, replacing Vader in the Emperors favour, especially now when Vaders influence has suffered after the destruction of the Death Star.
Emerging from Hyperspace, the TaggeCo vessel detects Luke and Leia's much smaller vessel, but thinks it may just be someone using their Hyperspace shadow to slip through the blockade, so drops space mines which take out the shields on their ship before Luke can maneuver out of the minefield.
Taking cover behind a small moonlet, Luke and Leia EVA and observe the Mining Vessel deploying Tie Fighter's from a point opposite the Yavin Base's orbit, so hidden from the Rebel's by the static energy from the Gas Giant.
However, they are soon spotted, and their vessel takes damage without it's shields, losing an engine.

High Points : This issue seems to be mainly setting up storyline for later issues, with not a whole load happening, but a lot of exposition. The two short action sequences, with Luke and Leia avoid the mines, and coming under attack from the Tie Fighters at the end, are extremely brief, otherwise it's lots of people talking and explaining things for the reader.
The one minor redeeming point is Orman Tagge, who seems quite an interesting character. Visually recognisable with his large Cybervision goggles, and with a plan which actually seems to make sence, replacing Vader politically by succeeding where he failed, it's one that is revived later in the Expanded Universe by Prince Xizor in Shadows of the Empire.

So what do you really think ? : There's plenty to read here, but it's dumping so much information for later that it's interesting from an intellectual point of view, but doesn't provide much actual story or action to keep you interested.

Final Words : I'm following the treasure.
In the Wheel storyline, Strom raided the Wheel's profits from a transport vessel taking it to the core systems banks and was witnessed by Han, Luke and Leia.
He chased them to the Wheel itself, and during the action there, Simon Greyshade's security teams slaughtered the crew of Strom's ship and retook the treasure, transporting it to Greyshade's Yacht, which he intended to flee the Wheel aboard.
Feeling a surge of heroism, he gives the Yacht to Luke and Leia, dying in the fight to defend the hangar bay as they leave aboard the ship.
Luke and Leia take the ship to Centares and swap it for another ship, and C-3PO reports "Artoo and I have transferred everything to the New Ship".
So currently the treasure is in the cargo hold of Luke and Leia's new ship.
I'm going to keep an eye on what happens to it, because I have a feeling it will soon just be forgotten about.