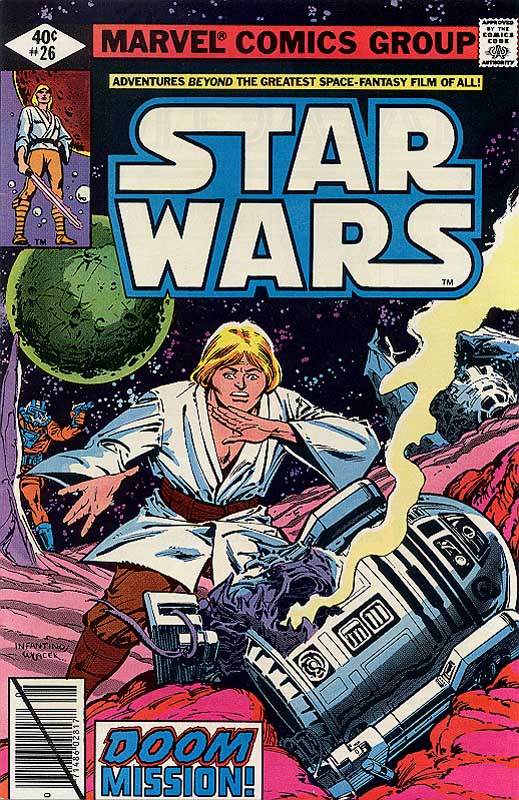 What is it ? : Luke and Leia are under attack by Tie Fighters above Yavin, their ships communications and weapons are disabled along with one engine and they fall into the Atmosphere of Yavin IV, where an X-Wing patrol intercepts them forcing the Tie Fighter attack away and allowing their flaming ship to land at the Rebel Base.
Leia shows General Dodonna recordings from her Macrobinoculars showing the Tie Fighters entering and exiting the atmosphere of the Gas Giant via some kind of vortex. They work out that the Tie Fighters home base is hiding within the clouds of the gas giant, where no X-Wing can venture for danger of being destroyed. They deduce that the Tie Fighter must have some kind of signal device to identify themselves and get their Home Base to open the vortex to allow them safe access.
Luke realises one of the Tie Fighters that was attacking him crashed fairly intact, so loads R2-D2 aboard a Y-Wing and heads off to the crash site to recover the signalling device.
They find the Tie Fighter mainly intact, and R2 proceeds to scavenge the tracking device but finds the fighter is rigged with Proton Grenades, and deactivates them before they are harmed. The Tie Pilot watching, attacks, hitting R2 before he is taken out by Luke.
Luke returns to the Rebel base with the signalling device and the damaged R2-D2, and becomes enraged when Rebel tech's tell him supplies have been blocked by the blockade, and R2 cannot be repaired, but they want to scavenge him to repair other more lightly damaged R2's.
Luke and Leia spend the night on Yavin, and Luke expresses his disappointment with himself at his recent failures, getting R2 damaged, not finding a new location for the Rebel base, etc. Leia comforts him, as does General Dodonna overhearing as he approaches to give Luke a new mission.
General Dodonna reveals that the Rebels have a captured Tie Fighter they used for teaching their pilots about the enemy fighters, and as the best pilot on the base, the very man who destroyed the Death Star, he wants Luke to take the Tie, now equipped with the signalling device, into Yavins atmosphere and destroy the enemy base there using Proton Bombs they are loading aboard the fighter.
Luke launches in the Fighter, and everything goes to plan, the vortex is opened for him and he reaches the TaggeCo base which thinks he is one of their patrols returning.
He attacks the base with the Proton Bombs, and Orman Tagge races to his TaggeCo spice explorer to escape the station as he recognises how vulnerable it is. The Proton Bombs find their marks, and the massive station is torn apart, which removes the vortex which is the only safe way of exiting Yavins atmosphere. Luke becomes lost in the massive storms, and his Tie Fighter begins to come apart, but by meditating on the Force, Luke successfully manages to exit Yavins turbulent atmosphere and return to the Rebel Base.
Meanwhile, Orman Tagge and his ship jump into Hyperspace, having followed Luke out of the storms, and swearing revenge on Luke for defeating his plans.

High Points : Sometimes I'm just impressed by the details that these comics get right, I'm not sure if they drew from some kind of writers guide which provided them details of the Star Wars Universe, or whether they themselves were used as sources later on? For example, the X-Wings are identified by General Dodonna as T-65's, which indeed is the model of X-Wing used by the Rebels at Yavin.
Otherwise, there's a lot of fairly interesting action in this issue, which climaxes without falling into the same tropes of a space battle that these stories can fall to.

Low Points : Well, wow, that's over quickly. After last issue spent it's pages being a massive information dump, I assumed it was setting up a multi issue story about the Siege of Yavin. However, that's the Siege defeated already, and the Rebels can return to using the base unmolested. Which really seems wrong, that now some months after the destruction of the Death Star, the Empire hasn't moved on the base which launched that attack.
I suppose Orman Tagge has survived, and that the information dump was in some regards to setting him up as a recurring villain, but this just seems to be over all-too-quickly.

And I must bring up the question of how did Orman Tagge know it was Luke that is attacking his station? Luke never communicates with them, or even communicates with the Rebel base to be overheard by them. The only method I can think of is that someone saw him through his cockpit window as he flew past and recognised him, which really makes no sense either as Luke hasn't been identified as the destroyer of the Death Star by this point, so is just some blonde haired farm boy.

So what do you really think ? : It's imaginative, it's action packed, but it's over too soon. With a feeling that it's rushing to get everything done for some reason, everything just rushes by, their rescue by the X-Wing's is over in one panel, a whole page is devoted to the mission to get the signalling device and R2 getting damaged. I really feel as if they'd spent a little more time and allowed the story to breath a little, then it would have come out better.

Final Words : So, next issue "Return of the Hunter", which I think they think excites me a lot more than it really does.