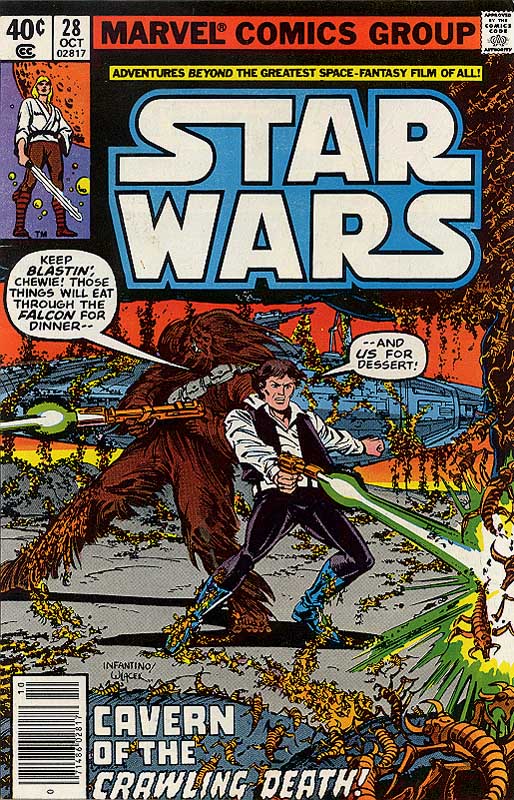 Marvel Star Wars Issue 28: What Ever Happened to Jabba the Hut?

What is it ? : With the Millenium Falcon concealed in a large cave, Han Solo and Chewbacca are defending the cave from Jabba the Hut and his hired help. Flashing back to when they were leaving the Wheel, Luke distracted Darth Vader allowing them to jump to Hyperspace, however the technicians on the Wheel during their search for the stolen bank money had disturbed some of the sensitive customised systems of the Falcon, causing it to vibrate, and forcing Han to land it to make repairs, concealing the ship in this large cave.
Shortly after they arrive, Jabba's vessel, the Voidraker arrives, and a standoff occurs, as Jabba's people cannot enter the cave, and Han cannot leave.
While scavenging in the cave for something to eat apart from Nutrient Paste, Han discovers Stone Mites, a Clone Wars Biological Weapon, small insects who emit an acid capable of burning through almost anything, including Starship armour.
Outside, Jabba's mercenaries have become bored with Han picking them off one by one as they try to take the cave, so they blast the cave entrance collapsing it. Jabba is not happy, as even though he wants Han and Chewie dead, capturing the fastest ship to do the Kessel Run, would compensate him for Hans losses, so he orders his men to use laser borer's to tunnel their way back in.
With the cave coming down around them, Han and Chewie sprint for the Falcon, only to discover that the explosion has caused thousands of Stone Mites to pour from the ceiling across the upper hull of the Falcon. They dash inside, using their blasters to clear the way, and Han jury rigs extra power to the ships de-icers to burn the Stone Mites off the hull, however with the entrance closed, the ship can do nothing but hover in the cave as it's power converters fail due to the extra load being put through them.
Jabba's people dig far enough into the cave to discover the Stone Mites, and flee back to their ship and into space.
Using the ships sensors, Han discovers that the Stone Mites have tunnelled through the roof of the cave to such a degree, that a couple of shots from the ships weapons are enough to blast it open allowing the Millenium Falcon to escape from it's entrapment and race into Space.
The Voidraker awaits them there, but they discover Jabba willing to make a deal, as his ship has become infested with Stone Mites, and they reach an agreement that Han will rescue Jabba, if he cancels the bounty on their heads. Jabba crossed the space between the vessels in a space suit, knowing he will agree to the deal, but decides to wait half an hour to make it look good, and begins planning for the future when he'll have the upper hand.

High Points : There's a lot to like in this story, although remembering that the Jabba in this story isn't actually Jabba, it's Mosep Binneed working as Jabba's representative.
Dropping us straight into the action is great, and bringing back "Jabba" is really welcome, but as always it's the glimpses into the Galaxy Far Far Away which help make this issue stand out, introducing the Stone Mites, biological weapons used during the Clone Wars.
It gives us a peek into the Clone Wars, where apparently one side or the other were using destructive insects to deny planets to the enemy, seeding worlds with these bugs which would be able to destroy bases and starships, consuming technology and people.

But it's the atmosphere which makes this issue, there's a certain boredom to Han and Chewies situation, trapped in a cave against Jabba's goons, but secure enough to hold out. The two are tense and snap at one another in a way we've not seen before, immediately apologising, but the stress of the situation is showing. Meanwhile outside the rain pours down, adding a mundane oppression to the situation, adding a depressing realism to the situation.

Low Points : Apart from it being the wrong Jabba, which has long since been retconned away, there's not a lot to criticise in this issue, and in some ways I prefer this Jabba to the one later presented by the movies. This one is scheming and willing to change his plans, this one feels like a minor crime lord that a hustler like Han would get involved with (I've always felt that Jabba in the movies is too much of a player on the galactic scene, too influential and important).
There's some nice call backs to lines in the movie, such as Jabba wanting to get his hands on the Millenium Falcon, as it's one of the best spice smuggling ships in the galaxy, so worth quite a bit. There's mention of how customised the Falcon is, and how the searching of it on the Wheel has caused problems with it's systems, which makes it feel more jury rigged and like the ship we now know.

So what do you really think ? : I really liked this issue, and while not all elements used in it fit comfortably within the Star Wars Universe as we now know it, Han being trapped on a world by Jabba's agents while repairing the MIllenium Falcon and setting off a Clone Wars era weapon, sounds one of the most Star Wars things I've ever heard.

Final Words : We're now about 10 issues from the release of the Empire Strikes Back, and from memory we're entering the run of absolutely classic Star Wars comics, and this issue definitely steps up the quality of the stories.