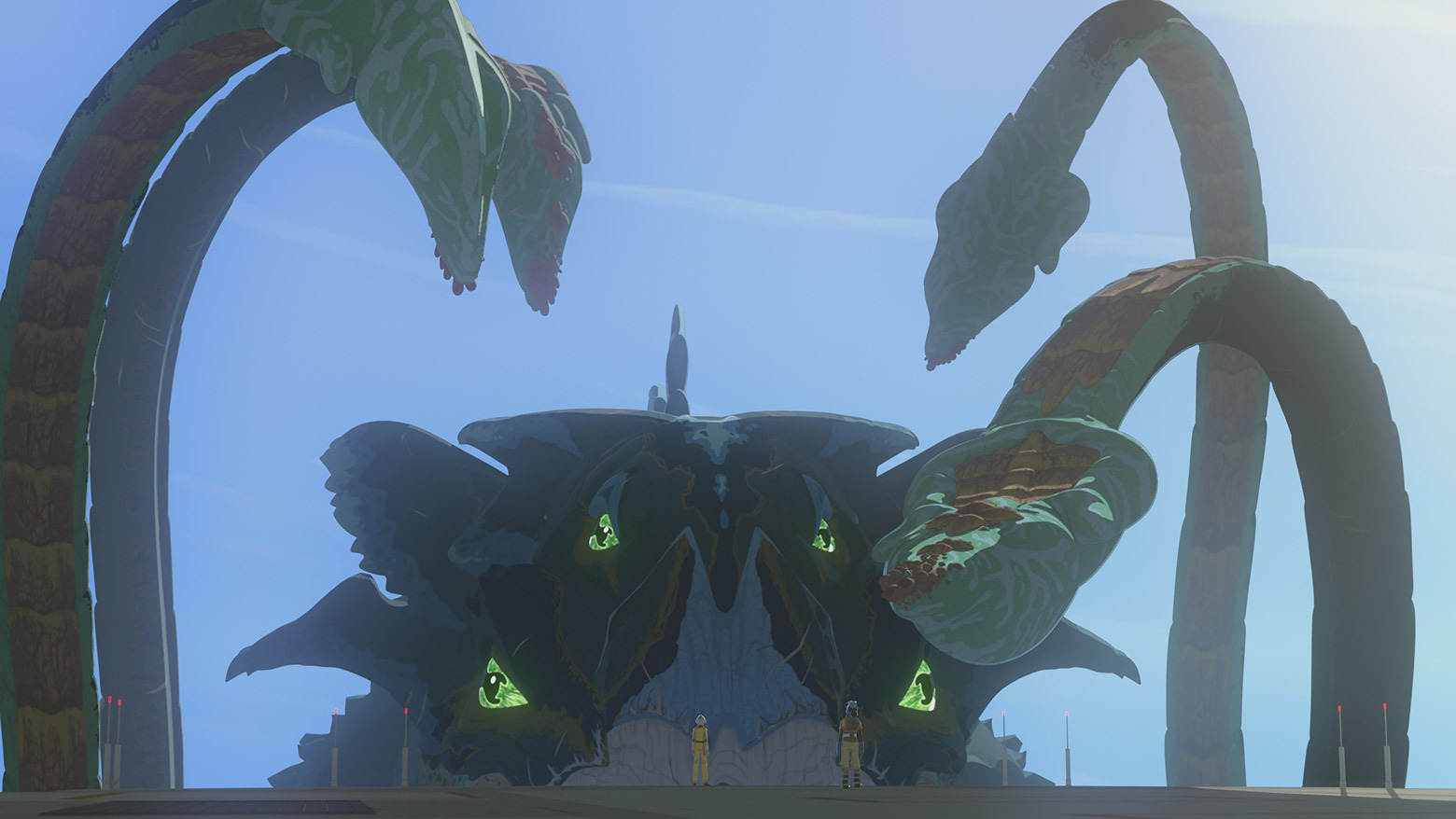 What is it ? : Kaz and Neeku visit Synara to get parts for the damaged Fireball, and she provides them the bits from a salvaged Z-95 she has just dredged up from the ocean. Kaz tries to offer Synara some food, but a small creature emerges from the wrecked fighter, which emits a disgusting smell that repulses Synara and Kaz, but the small tentacled creature reminds Neeku of a pet he had when he was a child, and he adopts it naming it Bibo.
Back in the garage, the parts they got for the Fireball turn out to be too badly corroded to use, so Kaz sets off back to Synara to find out whether she may find more Z-95's which may have usable parts. Meanwhile Bibo causes chaos in the garage, eating spaceship parts and drinking fuel as well as knocking things over and disrupting the work, after getting several chances to control his pet, Yeager orders Neeku to remove the animal, to which Neeku threatens to resign. If his pet is not welcome, he doesn't feel welcome either, but as they discuss it the animal leaves, with Neeku and Tam in pursuit.
Kaz arrives at the docks to discover Symara communicating with the other pirates, who have identified Kaz and Poe as Resistance pilots, but she cuts off communication before hearing too much and tells Kaz that it was just other salvagers she was speaking to.
They set off together to try to find other salvage, but out at sea they discover a massive creature heading towards Colossus, and turn to race back to the platform to warn everyone.
Not being able to locate Bibo, Neeku begins crying at the loss of his pet, and Tam comforts him, which he rejects as she disliked Bibo as much as anyone, but becomes friendly again when Yeager contacts Tam to inform her there is disruption in the engineering deck which might signify Bibo's presence.
Heading there, Neeku is reunited with Bibo, and Tam meets Kel and Eila who have been hiding there since they fled the First Order, but their conversation is ended as Synara and Kaz arrive back at the platform, and after some resistance from security manage to activate the alarms warning of the imminent attack by the creature.
It's tentacles wrap around the massive platform, and the Ace's are launched, along with Kaz in the Fireball. Tam thinks that Bibo may be the creatures food, so wants Neeku to hand him over to the creature to save everyone, but Neeku refuses.
The Aces engage the creature, and a number of them are damaged, although Kaz manages to save their lives, as the station commander and some of the Ace's witness his skill as a pilot.
Neeku notices similarity between the creatures eyes and Bibo's, realising that Bibo isn't food, he's it's child, and he tells Kaz to stop the Ace's attacking, which he does. Neeku hand delivers Bibo to the creature, which sinks into the depths peacefully.
Later, Kaz brings Neeku a new pet, a Gorg, which Neeku swallows in one bite, declaring it delicious.

High Points : The episode got off to a good start, with them discovering a Z-95, and some discussion of starfighter types used during the Clone Wars, and Kaz displaying knowledge of which squadrons flew which fighters (that the wreckage at hand was from Reaper Squadron, who only flew Z-95's, so Neeku's identification as a Z-96 is wrong). Kaz is showing himself as knowledgeable and useful, and we're being reminded of the Clone Wars, which is pleasant memories.

However, there's not much more to like in the episode, we're back to thrilling tales of a apprentice in the engineering department of a backwater colony, rather than any tales of the Resistance and battling evil.
The creature is done fairly well, and the fact that Kaz is flying along with the Ace's for the first time is a noteworthy point, but unfortunately it's all just more of the same for Resistance.

Low Points : Well, the twist in which Bibo is the creatures child was signposted so obviously, that the creature hadn't even been seen when I realised what was going on. As soon as they mentioned the creature heading for the platform, I knew it was mummy coming for it's child. Which just made everyone else look stupid when they couldn't work it out. Their theory that it was the creatures food just seemed to be grasping at straws, and really made me think the characters were acting stupid to make the audience feel clever, and it's difficult to root for your heroes if they're idiots.
This combined by Kaz's continued treatment, returning to the base telling people that a monster is coming only to be threatened with arrest for panicking the public by the security droids, made me root for the creature just to eat some of the annoying characters which keep cropping up throughout the series.

Finally, just a small note, but I thought that the platform had signed up the First Order to help defend it and Stormtrooper were now stationed here? None are visible, and no help is forthcoming when this massive creature threatens to destroy the base. Or is the defence contract only against pirates, and the First Order will just sit idly by and watch the platform destroyed by ravening sea beasts?

So what do you really think ? : A moment that truly annoyed me in the series, was when Kaz and Synara headed out to get salvage, and as soon as they depart the story cuts to Neeku and Tam looking for Bibo. With the build up with the discovery of a Z-95, Kaz's identification of it as belonging to Reaper Squadron, and their search for more wrecks from the same battle that left that Z-95 there, I had envisioned them discovering wrecks of starfighters of the Clone Wars, a glimpse at that conflict preserved under the waves of this world. But was robbed of that for Neeku whining about his pet, and Tam moaning about Kaz.

Final Words : I'm probably being more harsh on this episode of Resistance than I have been on many, because of the promise of more that it gave me at the beginning. Hint's of seeing remains of the Clone Wars, people treating the hero like he's worth something, and Synara's plot continuing as she spies on the platform for her pirate buddies. But we get instead, a small snot like creature which a character is willing to sacrifice everything for, but it just needs taken back to it's mommy, a storyline we've seen approximately a billion times before.
Ignoring the disappointment, I suppose this episode wasn't too bad, and Kaz gets to fly along with the Ace's for the first time, which is what we were promised about this show since the trailers.
Hopefully, Resistance is about to start making good on the promises it's made about being a story of the Resistance against the First Order. That we'd see the rise of the First Order, and we'd see action packed fighter races and battles. Because the series has seriously disappointed so far.