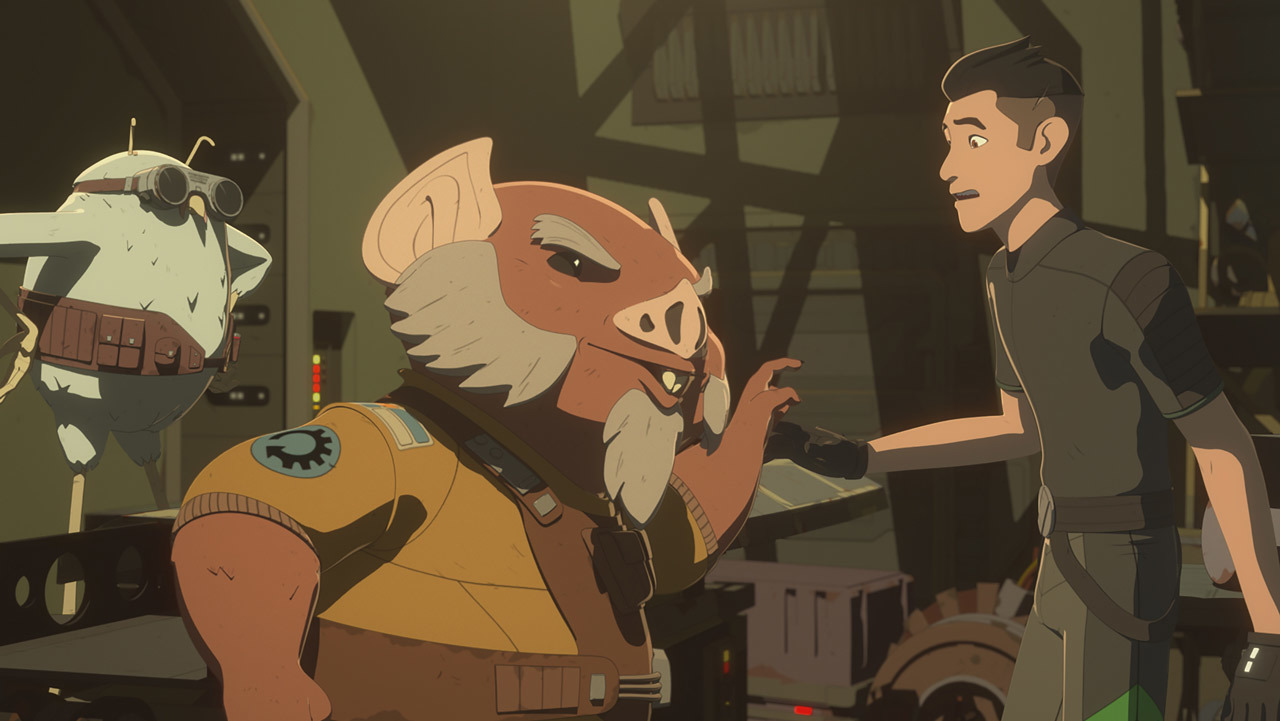 What is it ? : Yeager, Tam and Neeku arrive at the repair shop early, with plans to repair the Fireball after Kaz's latest outing, but find that Kaz is already completing the repairs. Neeku complements Kaz on his improving skills, although Tam manages to point out a mistake he has made, and Yeager questions where he got the parts.
Kaz reveals that he has agreed to cover Flix and Orka's shop for the day in exchange for the parts, and sets off to do the work.
As they prepare to leave, they inform him their most important rule is to ensure everyone pays, but he shouldn't sell anything in the back room, as everything there is already sold to other customers. He gets a couple of customers, before one tries to buy a phase connector, the only one of which is in the back room.
He selects a bunch of items and asks Kaz to deliver them, which Kaz sets off to do, leaving BB-8 in charge of the store.
Delivering the items, Kaz finds himself sealed in a cargo container, and the customer orders it disposed of. Kaz manages to assemble the parts he was ordered to deliver into a cutting beam, and escape the container, just as they drop it into the sea.
Meanwhile, the fake customer arrives at the store, and steals the phase connector, although BB-8 tries to hold him off by throwing items at him, but gets trapped beneath a cupboard, allowing the robbery to be completed.
Kaz contacts BB-8 and discovers what has happened, and spots the robber and the phase connector meeting with Stormtroopers, and realises that the Phase Connector is needed by the First Order.
Trying to recover the Phase Connector but is trapped on the First Order ship, ending up sabotaging it to deny the cargo to the First Order, he ejects in an escape pod.
The crew follow shortly afterwards as the ship crashes into the sea, and Kaz returns to the shop to discover the devastation just as Flix and Orka return.
After he explains, they tell him that the robber had been trying to get the part for some time, and must have been monitoring them to discover when they would be away from the shop. They're impressed by the effort that Kaz went to to stop someone avoiding payment, and don't seem to blame him, but they do expect him to help tidy up, and expect him to return to work the next day.
After leaving, Kaz tells BB-8 to inform Poe Dameron and General Organa of the attempted theft, as the only use for the device is mining, and he suspects they are attempting to get more dedlanite for use in weapons.

High Points : Although no one treats him as it, Kaz is extremely capable during the entirety of this episode, from completing the repairs on the Fireball, to assembling a cutting laser using only spare parts, he macgyvers his way through this episode amazingly well. He's a little gullible, falling for the trick to get him out of the shop, but since it's literally his first shift in the shop, you can't expect him to be 100% sure of when he should make deliveries and when not to.

Now, it's not made super clear, but I'm pretty sure that they're hinting that Flix and Orka are a gay couple. They talk of visiting Flix's parents, and Wookieepedia mention them as partners (although that could just be business partners). If they are, that's 100% a positive for me, the only stable relationship we've been shown in the entire series is a gay one. Brilliant, I know that Resistance is targeted at young kids, and normalising relationships like that is definitely something which should be done. It's subtle enough to not be part of "the gay agenda", but nice enough so that kids will be able to see that there's nothing wrong with them being together.

Low Points : Well, as always Resistance has problems all over, but my first one has to just be a question.
They just drop their junk into the sea?
During the episode, Kaz is trapped in a cargo container, the bad guy for the episode tells someone it's full of junk and needs disposed of, so they just drop it into the sea. I guess they've no murder problem, because I know for sure where I'd dispose of a body (although given they're on a platform in the middle of a planet covering ocean, I guess just dropping someone off the side is a pretty easy solution anyway), but without checking for pollutants, without checking if there's anything valuable aboard (on this station where someone working full time has problems buying water), they just drop cargo containers into the sea. I'm not surprised the sea creature attacked them last episode, they're an environmental menace and deserve all the sea monsters the planet can throw at them.

Secondly, I'm really getting sick of Tam's criticisms of Kaz. She arrives, early, for work, with 2 co-workers, only to discover Kaz has done all of the work that the 3 of them were going to do. But his rush as they enter, he connects one part up wrong, and all she can do is gloat over his mistake.
Apparently he's much better at her job than she is, and much faster too, not only doing that work, but making the deal to get the parts at his own expense.
And? He's doing it to get the Fireball ready for her. A totally altruistic action.
Although I don't really like Kaz as a character, he is above criticism in his actions here, she should thank him, and probably offer to help him out at the shop at the very least. But does she, does she hell.

And finally, the whole motivation for the robbery. The First Order need the Phase Connector to mine resources for their weapons, and are stealing it from a junk store on a platform so poor that people don't earn enough to eat.
Given the fact that they've got fleets of Star Destroyers, millions of Tie Fighters and Stormtroopers, it feels a little beneath them to be robbing a junk store. It'd kind of be like the US Military robbing your local thrift store for parts to manufacture missiles for their latest fighter jets.
If that's the only part they can find because they're super rare, then tell us, and why don't they arrive with a massive bid for it. If it's super secret, why not just manufacture their own (they seem to be able to build Star Destroyers no problem). The premise just doesn't seem plausible to me at all.

So what do you really think ? : Again Resistance disappoints.
The premise is junk, the characters unlikable, the dialogue uninteresting. While there's some action in there, and very few good ideas, it's just nowhere as good as Clone Wars or Rebels.

Final Words : If I wasn't tied into watching it for these reviews, and was just watching the show for my own entertainment, then I'd probably have stopped by now. Although that said, I still live in hope of some genius to manifest itself somewhere along the line, and the half season trailer did give me a few hopes that there's a plan, and some decent storylines to come.
My youngest son and I have always watched the Star Wars animated series together, he got me to watch Clone Wars, and we sat at the premier of each and every episode of Rebels and loved them all.
Resistance I sit and watch alone now. He's given up on it a few episodes ago, which is the harshest criticism I can level at the series. My 13 year old son, who loves everything Star Wars, doesn't want to watch Resistance any more as it's just not good enough for him.