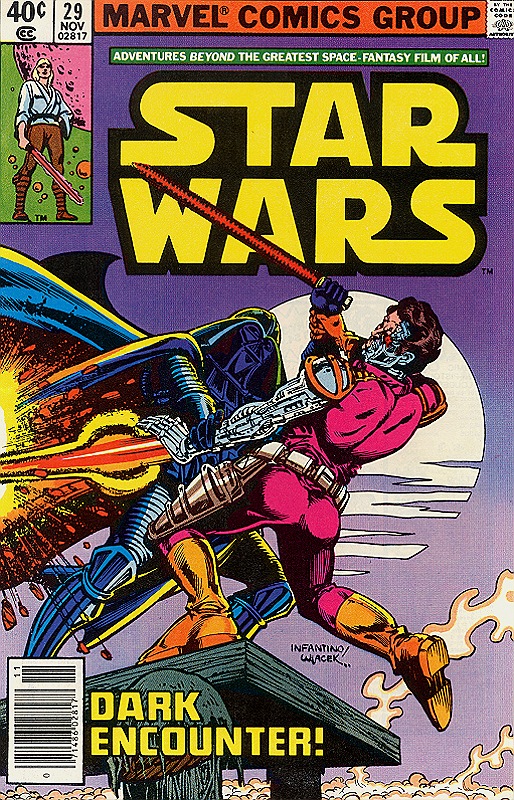 What is it ? : The issue opens in the detention block of a Star Destroyer, Darth Vader is torturing a prisoner, who knows the location of Tyler Lucian, a Rebel deserter who knows the identity of the man who destroyed the Death Star. The mans screams disturb even Imperial Stormtroopers and the commander of the vessel, Mulchive Wermis.
Meanwhile in a cantina on Centares the cyborg bounty hunter, Beilert Valance, is searching for the same man, getting into a gun fight and using his cyborg strength to crush the hand of the bartender until he reveals the location.
As he leaves, two Stormtroopers stop him, and he uses his Bounty Hunter credentials, but when they notice he is a cyborg he is forced to gun them down.
He tracks his prey to the guest towers at Rubyflame lake, a former holiday destination, now polluted and abandoned because of the Empire, where he finds Tyler Lucian. Lucian tries to bargain for his freedom with the information about the destroyer of the Death Star, but Valance doesn't want it as he already knows Luke's identity. Lucian flees into a defensible position in the nearby tower as Valance is distracted by the arrival of Darth Vaders Tie Fighter.
Cutting away to Yavin, C-3PO meets up with the repaired R2-D2, and Luke discovers that Leia has left on a mission by herself which he is angry about, but General Dodonna reminds him that she is capable of more than just being a figurehead, and offers to send Luke on a mission to distract him from Leia's danger.
Valance and Vader face off outside the guest tower where Tyler Lucian is hiding, Vader tries to talk Valance into rejoining the Empire where his skills could be used, but Valance is surprised that Vader is not attacking, until Vader reveals that he is, using the force, as Valance can barely lift his Blaster Pistol any longer.
With a blast from his cyborg hand he distracts Vaders force use, and the two fight on rickety wooden walkways over the burning lava of Rubyflame lake. After a struggle, Vader emerges triumphant, but Valance has made it clear he dies for a cause that the man who destroyed the Death Star symbolises, a galaxy where even a cyborg like him would be accepted.
As his body falls into the lake and is burnt away, Vader turns to the tower, only to see that Lucian has overhead their talk, and willingly sacrifices his life by leaping from the tower into the burning lake to avoid Vader obtaining the information.
Vader returns to his Star Destroyer, and after overhearing two Stormtrooper discussing how they are looking forward to getting off duty and removing their armour, he orders an alert status, where even off duty personnel will need to remain in their armour.

High Points : This issue seems incredibly brief, with it all leading up to the fight between Valance and Vader, which is done pretty well, on platforms over a lava lake, where any slip will lead to death, and where they can target the platforms themselves to cause their opponent to fall.
In fact the entire location of the guest towers at Rubyflame Lake is an interesting one, a former holiday destination which has fallen into disuse and disrepair because of Imperial mining and pollution. Meaning that the Vader and Valance fight is taking place within a symbol of the destructive policies of the Empire and what Valance is fighting to stop.

Low Points : This may just be a personal preference, but I really didn't find Valance a compelling character at all, and the Anti-Cyborg sentiment shown towards him doesn't really echo anything we actually see in the movies later against Luke or Anakin/Vader. The fact that this ex-Stormtrooper can fight Vader to a halt, doesn't seem realistic at all, unless his cybernetics are superhero ones rather than just the prosthesis that others seem to get installed.

It also feels like the story is being stretched, when Luke is being heralded as hero by the Rebellion on one hand, but Vader hasn't even been able to discover his identity. They can't have it both ways, with Luke being famous, but his identity secret at the same time.

So what do you really think ? : This issue was a little bland, with only the fight really occurring, and a guest appearance within their own comic for the heroes, and it's over in a flash.

Final Words : Hopefully we're onto more interesting territory next issue, as although this is finishing off a storyline they've been building for a number of issues, it really felt like filler.