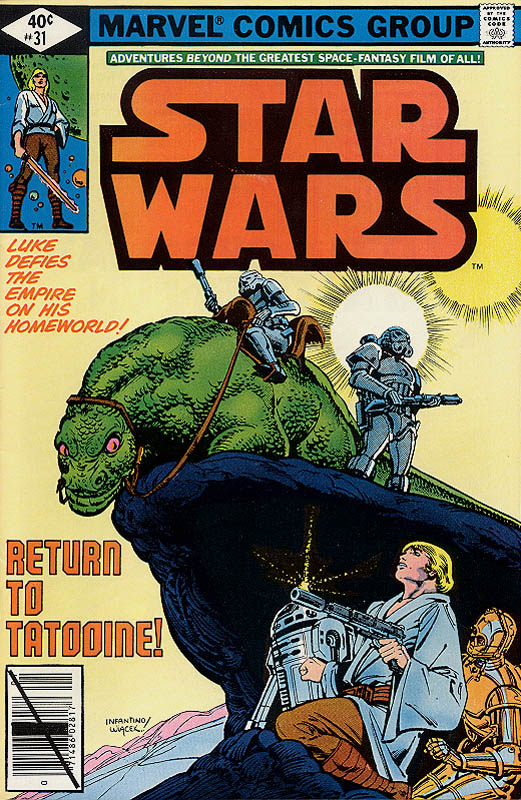 What is it ? : In deep space, a TaggeCo Mining Explorer rendezvous' with an Imperial Battlecruiser. Aboard, Orman Tagge meets with his brother, Ulric, the commander of the vessel. They discuss Orman's failures, but he reveals he has another project in place which will help Ulric's position within the Empire, and it is being tested on a backwater world called Tatooine.
Meanwhile, Luke has just landed on Tatooine, and observes an Imperial patrol through his electrobinoculars, while C-3PO and R2-D2 unload a speeder and cover his ship in electronically charged fabric which will hide the ship from sensors. The patrol detects the Landspeeder, but just assumes it is someone local hunting and moves on.
Luke reveals he is here to hire pilots to help smuggle the Rebel's away from Yavin, and is going to go to Mos Eisley to recruit them. As they travel, he suddenly stops the speeder, realising that they are passing the Lars Moisture Farm, and he stands beside the burnt out remains of the farm he grew up on mourning his Aunt and Uncles loss for a moment before he realises that the Moisture Evaporators are still being maintained and are running.
He is ambushed by the new owner, who he easily defeats, which is revealed to be his childhood friend, Fixer. Fixer has married Camie, and the Empire has granted them the Lars and Darklighter Moisture farms because they are concentrating on something large in the Dune Sea and Jundland Wastes.
C-3PO calls for Luke, telling him that R2-D2 has detected something moving nearby, which appears to be an Imperial Troop Carrier. Luke trails it as it appears to be searching for something, and speeding down a ravine, he is forced to swerve suddenly as they encounter a Bantha blocking the way. The investigate the unmoving Bantha, only to discover that it is frozen solid even under the twin suns of Tatooine.
They conceal themselves, and watch as the Imperial Troop Transporter locates the Bantha, and the troops aboard open fire, reducing the creature to vapor. Unsure of what this means, Luke heads onto Mos Eisley to complete his mission.
Meanwhile, Baron Orman Tagge has arrived on Tatooine, and is speaking with another of his brothers, Silas, who is a scientist. They discuss the lost Bantha, but Orman is not concerned as the the project is nearly complete, Orman also reveals that he has chosen Tatooine in an attempt to draw Luke's attention and lure him into a fight with Orman and his own Lightsaber.
Luke arrives at the Mos Eisley cantina, commenting to the droids about their last visit, wishing he could see a friendly face such as Obi-Wan or Han, when he literally bumps into Han. Han tells Luke that he arrived on Tatooine when dropping Jabba off, and has been spending some of his reward for saving his life.
Fixer rushes in, telling Luke that he and Camie have done a bad thing, to protect their position on Tatooine they've told the Empire that Luke is here. A patrol enters the Cantina, and Han, Luke and Chewbacca make a fighting retreat from the building, with C-3PO piloting their speeder away.
The patrol unable to follow spot coolant on the ground, and realise the heroes speeder is damaged and will soon overheat and fail.

High Points : I'm guessing this issue was produced once The Empire Strike's Back was in production and the name had been revealed, as Ulric Tagge name drops the film, "The Empire will Strike Back", which I found an amusing bit of set up.

The story itself is interesting, with the plans of Orman Tagge not being revealed as yet, and Luke encountering characters and locations from his past, and the coincidental location of this latest Tagge project being revealed as being on purpose to lure Luke in. Fixer and Camie's betrayal makes sense, and is understandable, as they attempt to protect what little they've managed to gain on this backwater world far from the Galactic Civil War and it's politics.

Low Points : I'm a little annoyed by how often Orman Tagge is being used, he seems to rush from one side of the galaxy to the other, in order to engage the various heroes as each of them has their own adventure almost concurrently.

We're finally seeing the Rebels prepare to leave Yavin, and I'm guessing that their base on Hoth by the start of Empire Strike back is basically going to come out of nowhere. But it's really feeling a little stupid that the Empire hasn't attacked the base yet, the writers seemed in the early issues to understand that the Imperial counterattack was coming, so why not have them relocate already?

Finally, I'm a little confused as to the difficulty they've been showing that Vader is having in discovering Luke's identity, but not only does Orman Tagge know who Luke is, but has apparently found his details on the Imperial Census, so knows where he lived. Knowing what we know about Luke and Vader's family relationship, this really makes Vader seem quite the fool.

So what do you really think ? : This is an excellent revisit to Tatooine, and really felt like Luke was displaying local knowledge and being able to succeed in his mission because he knows this world and it's terrain. Although he's being a bit overused, I'm enjoying Orman Tagge as a villain, and the way they're constantly revealing more and more siblings, all of whom are in useful roles for him.

Final Words : I've no memory of this story at all, from the frozen Bantha I'm guessing that Tagge has developed some kind of freeze ray, but we shall see where the story goes from here.