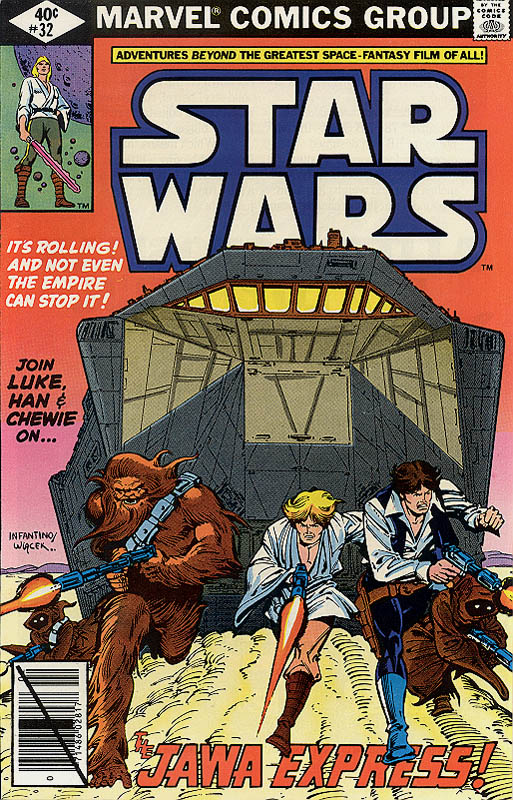 What is it ? : Han, Luke, Chewbacca and the Droids have fled Mos Eisley into the desert, where the coolant leak has caused their speeder to fail. Luke repairs the leak, but they don't have enough coolant to go on, and Chewbacca spots an Imperial Patrol heading their way. C-3PO suggests that since Droids also use coolant, that they shut the droids down, and drain their coolant to get the speeder working which they do.
They head to Luke's concealed ship and spot a Jawa Sandcrawler stripping it down for parts, so they trade the droids for transport (with the intention to buy them back with Han's treasure in the Millenium Falcon), they board and head back to Mos Eisley. However, the Jawa's reveal that their route is going to take 3 months to get back to the port.
Spotted by Stormtroopers, Han and Luke use hatches on the top of the Sandcrawler to hold them off while they escape, but they soon stop when the Jawa's spot a massive Moisture Vaporator which they want to raid for parts. As they examine it, and notice another Sandcrawler approaching, Luke feels cold, and gets the heroes to leap into cover.
Emerging they discover the desert coated with ice, and the other Sandcrawler crumbling under its own weight as the metal has become so fragile with the cold. They see Baron Orman Tagge and his brother Silas Tagge examining the after effects of the weapons test, but are spotted and retreat into the Sandcrawler to flee, the only remaining Jawa's grateful that Luke saved their lives.
The Sandcrawler smashes through blocking Imperial Troop Transports, and Luke drops fuel tanks aboard the Sandcrawler, detonating them with Blaster fire to destroy any pursuit. C-3PO and R2-D2 emerge, having been resupplied with coolant by the Jawa's, and they resupply the Speeder too and head back to Mos Eisley and the Millenium Falcon.

High Points : Again we get one of those issues which just flies past, where a lot happens but it all just kind of gets glossed over. But there's quite a bit of story here, with loads of action, and some of it quite innovative, with Luke using the supplies aboard the Sandcrawler to discourage pursuit.
It's also nice to see the Jawa's treated correctly, stopping at every opportunity to scavenge for technology, with both causes problems for the heroes (as they dismantled Luke's ship), and moves the story forward (as they stop to examine the Omega Frost device).

Low Points : Everything just seems a little co-incidental in this issue, the Coolant the droids and speeder need is aboard the Sandcrawler, there's explosive tanks aboard the Sandcrawler to use against the pursuing Imperial forces, they just happen to encounter the Omega Frost weapons test is all of the desert. It all just a bit too convenient and simplistic.

So what do you really think ? : This issue was fairly entertaining, with a lot going on, but there didn't seem much to get my teeth into. It's all fairly superficial, with things happening to the heroes out of convenience, rather than them really doing anything, which left me unsatisfied.

Final Words : Well, the Omega Frost hasn't been dealt with, so I guess this story continues next issue.