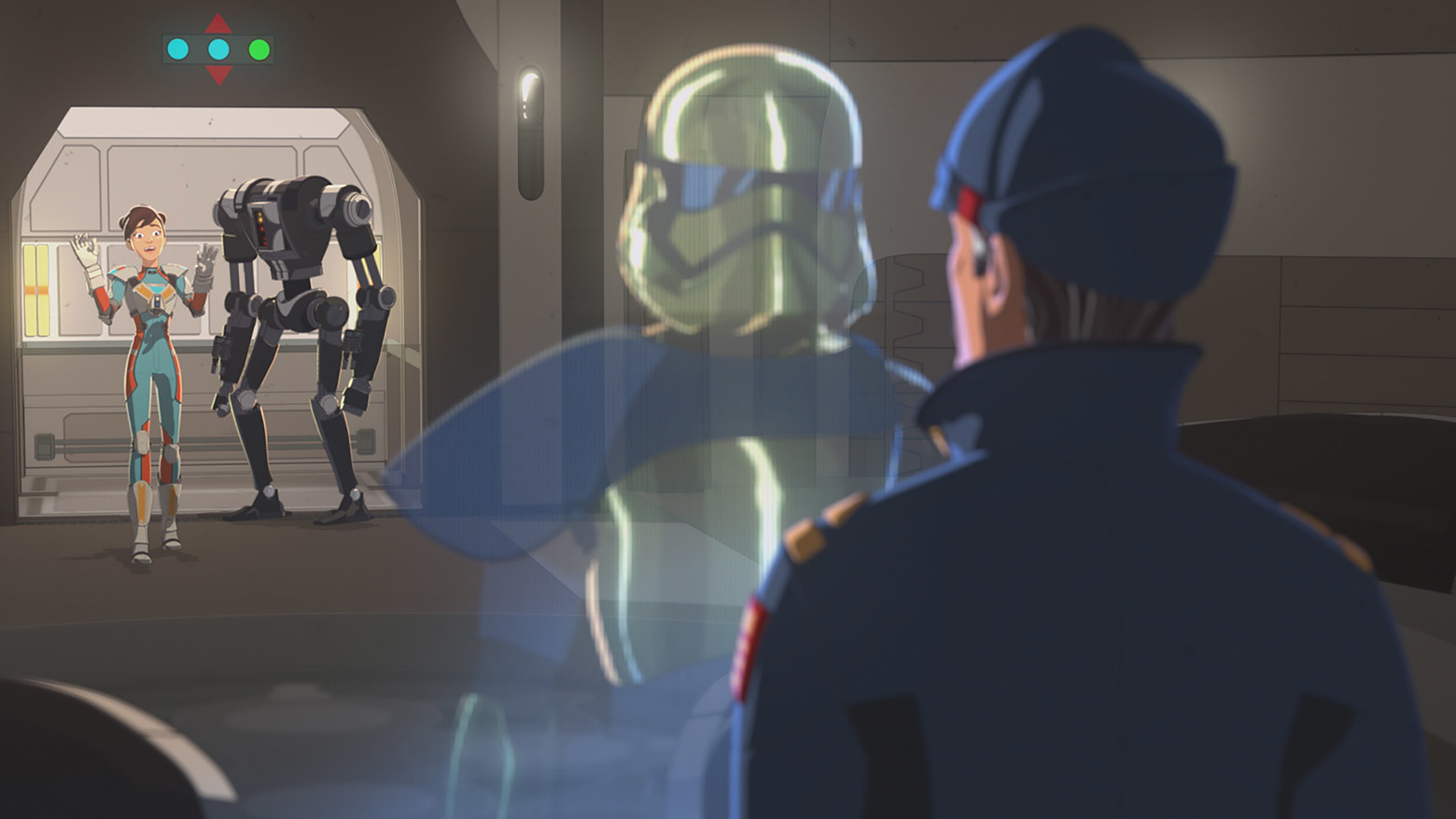 What is it ? : The episode begins with First Orders Commander Pyre and Captain Phasma contacting Kragan Gor, the leader of the pirates who have been attacking Colossus Station and berating him for his ineffectual attacks. They order him to take something valuable away from Commander Doza to force the station to call in The First Order, his daughter, Torra.
Kragan contacts Synara as she works aboard the station, and tells her to expect a shipment which will contain two men for a mission aboard the station, and that she is to find a way into the control tower.
She heads to the bar, entering as Torra and Tam finish a game of Holodarts while BB-8 and Kaz watch. Torra invites everyone back to hers to play a new Drone Blaster game she's got, and lets everyone into the tower, with Synara noting all of the security and asking some questions about it. Torra tells them that her father suspects pirate spies are aboard the station so he has tightened security, she then pointedly looks at Kaz.
Torra and Tam do reasonably well at the game, but Synara is brilliant, and Kaz useless. Torra gives everyone an access code to the tower in case they want to return for a rematch.
The First Order contacts Commander Doza and once again offers help against the Pirates which he refuses for the moment, having faith in his security droids and wanting more time to make a decision.
At Yeagers repair shop, the team finish up some work, with Tam going to meet Yeager, but Kaz wants to see Synara, who Tam believes he has a crush on. When he arrives, he finds that she has just unloaded the cargo pod and is standing with the two Pirates she has just helped smuggle aboard. Keeping himself concealed he follows as she takes them to the tower and uses Torra's code to let them in, where they reveal that Torra is their target, leaving Synara behind.
The pirates use a Droid Popper grenade to shut down the security droids, and grab Torra and leave the station on Speeder Bikes.
Synara bumps into Kaz and informs him that someone has taken Torra, and they see the two fleeing the station with Torra, and head to the repair shop, where Kaz takes the Fireball in pursuit, while Synara informs Commander Doza, who launches the Aces to find his daughter.
Tracking Speeder Bikes over the sea, the Ace's take up search patterns, but Kaz who is trailing the Pirates directly manages to follow them to a skiff, and takes fire as the pirates man it's turret as it takes them to Kragan's sail barge. Whose location he tries to communicate to Commander Doza and the Ace's, however his communication system has taken damage from the skiff fire.
He circles over head, and the Sail Barge's weapons hold him at bay, and as BB-8 repairs his communication system, he detects a First Order shuttle arriving. With communications now working, he calls for reinforcements, however is shocked to see the First Order attacking the pirates and rescuing Torra.
Once she is aboard their shuttle they head back towards the station, and the First Order informs Doza that they have rescued his daughter, and he orders the Ace's and Kaz to escort the shuttle safely back home.
Red Armoured Major Vonreg tells Commander Doza that they heard about the kidnapping and intervened, and will leave troops behind to ensure security while he makes his decision on whether he needs their help.
The next morning, Synara communicates with Kragan who tells her they've been betrayed by The First Order and the deal is off, she asks what she is to do, but is forced to end the communication when Kaz arrives asking questions about the two people he saw with her, she makes up a lie about them being offworld scavengers, but this leaves Kaz suspicious, something he later tells BB-8.

High Points : Well, there's quite a lot going on here, with the action in the tower, the chase and then the rescue of Torra, and we're really starting to get what Resistance promised us in the start, Kaz and the Ace's flying against the First Order's schemes.
The First Order's plans to use the Pirates to cause trouble so that the First Order is invited in to restore order, rather than needing to conquer planets, actually makes a lot of sense. To a certain degree it's the same plan Palpatine used (to cause trouble, and supply the solution), so it shows a nice degree of continuity from the Empire to The First Order.

Low Points : It's all so formulaic and convenient, Synara needs to sneak people into the tower, Torra hand over the codes to her friends (which for the first time includes Synara) so they can play video games anytime is just the prime example of this.

Also Doza must be some kind of cretin to not notice that this is all a set up by the First Order, with the Pirate kidnapping of Torra happening while they're trying to convince him of his need for their presence, and their rescue of her occuring before even his Ace's had made it onto the scene.
In fact, they even discuss them paying the Pirates for kidnapping Torra in front of her during the rescue, so if she doesn't mention this to her father, then she obviously has some kind of brain damage too.

The episode continues kicking Kaz, this time by making him incompetent at the drone shooting game (which was at least a nice touch, a holographic game where you shoot the same type of drones that Luke trained with in A New Hope). They never hesitate to point out exactly how useless our hero is, which makes me feel as if the writers don't even want this show to be about him.

Finally, Synara keeps almost getting caught communicating with her pirate bosses because she only ever steps behind a box to speak to them. If she simply took the precaution of locking herself in a bathroom, her sleeping quarters, or even just standing out in the open, but with a clear view of anyone coming, she'd be able to speak uninterrupted.

So what do you really think ? : Well, it's perhaps one of the best episodes of Resistance yet, but that still doesn't make it very good. With Kaz still acting and being treated like an idiot (even though for the second time since the series returned he's flying the Fireball along with the Ace's, showing similar levels of competence), and the story being so simplistic and everything just happening through convenience (which just feels like lazy writing), it's hard to find elements of the series to recommend.

Final Words : My hope is the series is really going to switch up a gear at the end of the season, and this season will just have been laying the groundwork, as the events of The Force Awakens occurs, leaving Kaz without Resistance support, and the First Order schemes revealed before everyone. Perhaps we'll get into Kaz and the Ace's really fighting The First Order to save the galaxy.
But at the moment we feel a long way away from that, and the mundanity of most of the storylines are a constant disappointment.