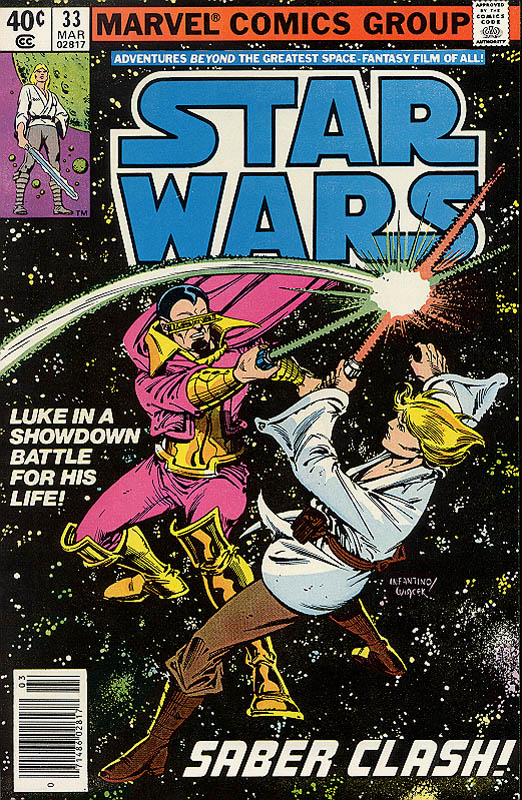 What is it ? : Han, Luke, Chewbacca and the Droids are leaving Tatooine aboard the Millenium Falcon, when they spot a shuttle docking with the TaggeCo Mining Explorer which they know was involved in the blockade at Yavin. Luke realises that it must contain Baron Orman Tagge leaving with the Omega Frost weapon.
They follow the Explorer to Feriae Junction, where they see it transferring cargo from an Imperial vessel, which Luke guesses must be captained by Ulric Tagge, the Baron's brother.
Since the cargo is being manually loaded by workers in Space Suits, Han maneuvers the Falcon close enough, and Luke EVA's out and mingles with the workers listening into their comm traffic. He overhears that the Omega Frost is going to be used on the world of Junction, killing the population and ceasing the supplies which are being smuggled through there to the Yavin base.
As he tries to leave, Luke is spotted by Stormtroopers, and he warns Han before he is stunned.
Han returns to Yavin, and warns the Rebels about the attack which will kill the population of Junction just to stop the Rebel supplies, and General Dodonna begins to organise the Rebel fleet to intercept and save that world.
Luke reawakens as a prisoner of Baron Tagge, he is interested in Luke, a boy who dresses as a farmer, but carries a lightsaber, and pilots an X-Wing so well. He reveals that the comm traffic was planted for Luke to overhear and warn his friends, as the Omega Frost will not be used on Junction, but instead on the Rebel Fleet as it comes to Junctions rescue.
Luke grabs his lightsaber and escapes, but this is also part of Tagge's plan, as he wants a lightsaber weilding opponent to hone his skills against, in preparation for the day when he intends to fight Darth Vader.
Luke sneaks to the flight deck, intending to steal a Tie Fighter and warn the Rebels, but Tagge is already awaiting him, having come to the conclusion that this would be Luke's action. The two fight, and Tagge begins to respect Luke as their lightsabers clash. While he is untrained, his Jedi senses and reflexes give him an advantage.
Tagge decides to give himself an advantage, and cuts the lights, using his cybervision to see through the darkness. Realising that Luke has senses beyond the natural, Tagge decides to distract Luke by throwing an object at him, and then striking when Luke defends against that, however Luke's reactions are faster than he realises and Luke strikes at Tagge.
Luke leaves the vessel aboard the Tie Fighter, planning to warn the Rebel Fleet, as Stormtroopers arrive to aid Baron Tagge, only to find him unharmed, Luke's strike was so perfect that he only hit and destroyed Tagge's cybervision, disabling him, and the realisation of how all of his training, tactics and planning were useless against a Jedi opponent leaves the Baron near catatonic.
The Stormtroopers inform his brother Silas, the scientist behind the Omega Frost, who reveals that while Orman is the leader, Silas is the logical planner of the family, and he planned for this eventuality, by disabling the stolen Tie Fighters weapons, communications and draining it of most of its fuel, meaning Luke will be left floating in space with no way of warning his friends or calling for help.

High Points : Orman Tagge really comes across as one of the best villains we've seen in the comics, with his tactical planning close to genius levels, he suffers defeat only from not taking Jedi reflexes and senses into account. This blind spot in his plans makes his character all the better, because without it he would look foolish in his plans to challenge Vader in personal combat.
It's also great to see an opponent defeated not by killing him, but by destroying his self image and his plans. Orman Tagge may return, but he is broken now, and he will always now be aware that Vader is beyond his reach.

Low Points : Apart from the fight between Orman Tagge and Luke, not a lot happens in this issue, it's a real page turner, but that means that it's over in a flash. But is that really a criticism? That it's so good that it's over too soon?

So what do you really think ? : I enjoyed this issue, which is a satisfying conclusion to Baron Tagge's plans, even if the Omega Frost hasn't been dealt with yet. It's a bit of a pity to see such an interesting character reach the end of his story arc. I've no idea if they continue to use Orman Tagge after this, but if they do, he's not going to be as quite an interesting character as we've now seen not only him defeated, but destroyed at a personal level by that defeat.

Final Words : So, we now swap to Silas Tagge as the villain, as he plans to use the Omega Frost to destroy the Rebel Fleet as it is lured into the open to rescue the world of Junction, or will Ulric Tagge take the family business over?