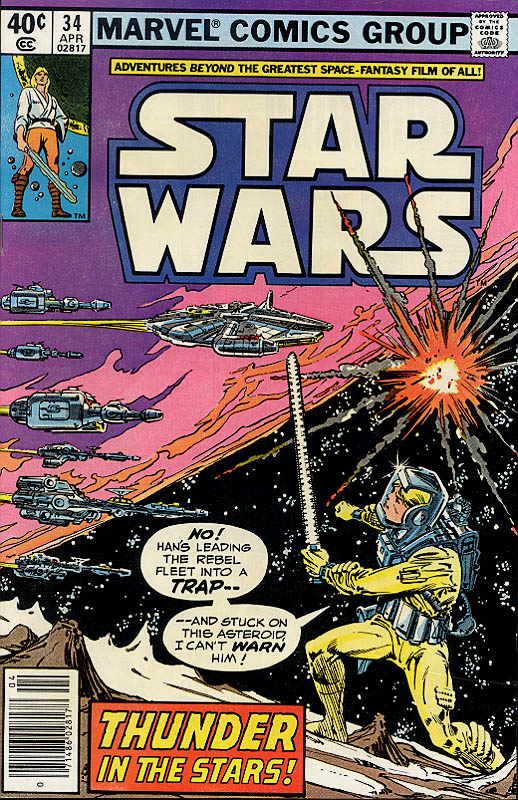 What is it ? : Han with Leia, Chewbacca and the Droids aboard is leading the Rebel fleet to Junction, to defend it against the TaggeCo test of the Omega Frost, which they believe will lead to the deaths of everyone on the planet.
Han decides to lead them in through the Asteroid field, which due to their size, cannot be patrolled by Star Destroyers, so should be a way to sneak in past the blockade.
Aboard the TaggeCo Mining Explorer, with Bacon Orman Tagge catatonic after his fight with Luke, his brother, Silas Tagge, has taken charge. This he believes is only right, as he created the Omega Frost, so he should be in charge of testing it. He also ponders that with his brother out of commission, perhaps it is only right he takes over as Baron as well, as a reward for his creation of the weapon, and also to run the company in a more scientific manner.
They finish deploying the Conductor Towers into the Asteroid field, having deduced that the Rebels are "daredevils" who will use the Asteroid Corridor to access Junction.
Luke meanwhile is drifting in his stolen Tie Fighter, now out of the small amount of fuel that Silas arranged to be in it, and without weapons, communications or any way of signalling the Rebel Fleet of the danger they are heading into. He ejects from the Tie Fighter, and uses the jet pack on his survival suit to guide himself into the asteroid field, and once that it out of fuel, he uses the force to direct his path to the Omega Frost conductor towers. Arriving there, he uses his lightsaber to slow his fall towards the asteroid and make a soft landing.
He locate the tower on the Asteroid surface, and attacks it with his lightsaber, but it is shielded, and repulses his attack. Silas detects the attack on the tower, and orders the Omega Frost activated, to hopefully catch Luke in its effect before he can damage it, but it is too soon to catch the Rebel Fleet.
The Rebel fleet sees the asteroids ahead of them freeze, but their ships are too large and unwieldy to avoid the effect and turn away in time, and they continue towards the activated Omega Frost.
Luke realises that the Conductor Tower is embedded into the surface of the asteroid, but the force field that protects it only reaches down to the surface, so he hacks through the rocks, revealing the base of the machine which he attacks, destroying the Conductor Tower, and deactivating the Omega Frost before the Rebel Fleet flies into it.
Silas orders a message sent to his youngest brother, Ulric, who is commanding their Imperial Escort, to scramble a Tie Fighter to deal with Luke, and rushes off to try to wake Orman, as he realises that this is not like the order of his experiments and his laboratory, and that Orman will be better at this than him.
However, the signal sent to Ulric reveals their ships location to the Rebel Fleet which attack and destroy the TaggeCo Mining Explorer just as Silas awakens Orman.
The Tie fighter sent to dispatch Luke begins it's attack run, but the Millenium Falcon swoops in destroying it and saving Luke's life.

High Points : This issue is action packed, and also is a very well told story. Allowing the various pieces of action to all come together and form a cohesive whole. With Luke's actions affecting the Rebel Fleet and Silas Tagge, and so on through to the signal Silas sends which reveals his location to the Rebels and to his destruction.
And it all builds to a really satisfying conclusion to the Omega Frost storyline, with the device destroyed, and it's creators seemingly killed.

Low Points : One part of this issue gave me problems, and really felt out of place and not really something which should happen in the Star Wars universe. Luke using his lightsaber to slow his fall onto the surface of the asteroid.
I re-read it over and over to try to make it work in my head, is he striking the asteroid and parrying it's inertia? Is his lightsaber creating some kind of thrust, almost like a gun firing?
I wasn't sure, but I think they intended the second one, and they see the lightsaber as a constant source of thrust as the energy blasts out of it. Which doesn't feel right to me at all, and there doesn't seem to be any evidence of it in the movies.
Not a major fault, but just one that really stuck with me.

So what do you really think ? : A solid conclusion to the Omega Frost storyline, and while well constructed, there's not too much which makes this issue stand out, and it just seems a little bland and predictable.

Final Words : There's just not much of a spark here to set off your imagination, and I have to admit that while some of the Marvel comics told stories which I still remember 40 years after originally reading them, this story arc wasn't one of them.
The parts set on Tatooine were good enough, and a nice early glimpse into a planet which is so important in the movies. And especially that they built on Bigg's lines from a New Hope, about the Empire coming to Tatooine, and the farmers ending up becoming just workers for the glory of the Empire, something we see has actually happened with Fixer and Camie.
But apart from those few interesting ideas, it just comes across as a bit bland, predictable and in the whole uninteresting. Competently done, but without the spark that would make it stand out as excellent.