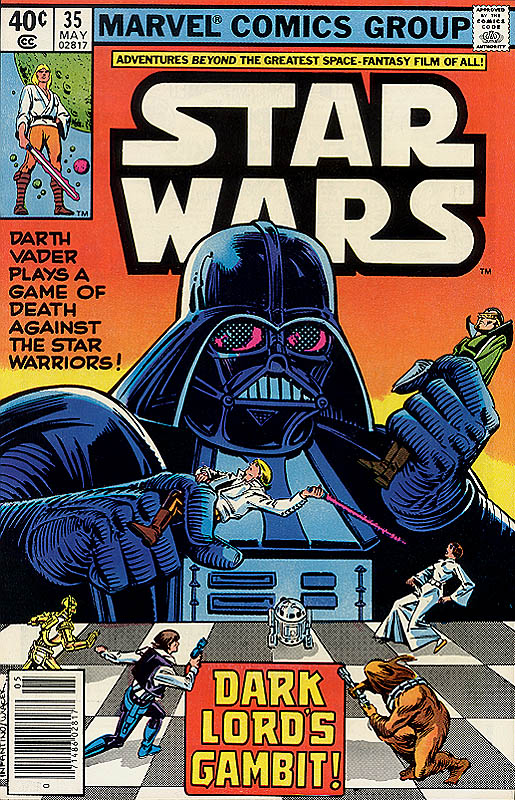 What is it ? : Darth Vader has single handedly taken out a Rebel refuelling base, and finally extracts the information he's been looking for, the name of the man who destroyed the Death Star, Luke Skywalker. He returns to his Star Destroyer and sets course for a rendezvous with the now Baron Ulric Tagge, and finds out how the test of the Omega Frost went, finding out that after Luke was rescued the Millenium Falcon and the Rebel fleet attacked Tagges Star Cruiser, with Leia at the guns striking a lucky his which pierced a reserve reaction causing them to abandon ship.
Vader forces Ulric's loyalty by revealing he has captured Silas and Orman Tagge, who are his captives in suspended animation.
Time passes, and Luke is leading Blue Squadron on a patrol near Yavin, when they see a civilian transport under attack from Tie Fighters, the X-Wings take out most of the Ties with Luke following one to an Imperial Cruiser, which flees into Hyperspace before he can summon forces to deal with it.
Escorting the transport to Yavin, they discover that it is manned by representatives of the Order of the Sacred Circle, headed by Sister Domina. They have come to ask the Rebels to send someone to speak for them. Darth Vader has arrived on their homeworld of Monastery, asking them to join the Empire against the chaos caused by the Rebellion. But the Order wishes to hear both sides of the galactic conflict and will allow one representative.
General Dodonna rules out Leia, due to her strong feelings against Vader and her anger about the destruction of her home world Alderaan, and chooses Luke after Domina tells them she thinks he would be good in the role as his light would provide a counter to Vaders darkness.
They leave for Monastery with R2-D2, and Han, Leia follow aboard the Millennium Falcon, with C-3P0 hooked into their communications systems monitoring R2-D2.
Luke and Domina arrive on Monastery, and are attacked by a Nightshrike, a creature which usually only comes out at night, after Luke defends them with his lightsaber and defeats the creature, Vader emerges from nearby with a number of the Order. He tells them that even the wildlife are reacting badly to the chaotic influence of a Rebel.
Afterwards, Luke comments to R2 how beautiful Domina is, and how he doesn't know where he stands with Leia when Han is around. Han and Leia overhear this through C-3P0's monitoring of R2. Meanwhile, Vader and Domina talk, about Vader using the force to make the Nightshrike attack, and how she normally would ally herself with the man her brother hated, but since Luke killed her brother, she is willing to help Vader, revealing her identity to be Domina Tagge.

High Points : Rather strangely, this issue not only continues the Tagge plotline from previous issues, but also feels like the start of a new story, with time passing in the middle of the issue. Vader has totally dominated the Tagge family, with both Orman and Silas Tagge his captives to ensure compliance. This feels totally in character for Vader, turning an enemy into an ally through kidnapping and ransom.
I also find the introduction of the Order of the Sacred Circle interesting, and I hope they're going to provide more information on them.

Low Points : The Order I do find somewhat problematic though, as to why they are so important that Darth Vader needs to be sent to bring them into the Empire. Do they have resources the Empire needs?, do they head a faction of worlds which would join along with them?, are they strategically placed? We're not told, and the idea that a small religious order would be so important to the Empire that they wouldn't just invade doesn't feel right.

Even though we move forward some time during this issue, and that the Rebels were planning to leave Yavin immediately after A New Hope, they're still there. The fact that Domina turns up to their hidden base doesn't right any alarm bells for the Rebels. It's such common knowledge now that even random religious orders across the galaxy know exactly how to find it. We're really stretching credibility now.

So what do you really think ? : While there's a lot of information in this issue, usually a selling point for me, and we get some real story progression here, the story feels a little more clumsily constructed that usual, and I'm not a fan of how fast we're moving through all of the Tagge siblings. We had Orman building as a villain for a number of issues, Silas introduced and then in charge for only one issue, a few pages of Ulric being baron, and we're now onto Domina Tagge playing a duplicitous role.
I'd much prefer we'd had each of the siblings in their own stories, and we could have savoured their differences in approach, rather than just have them thrown into the story one after another.

Final Words : There's a few odd design choices in this issue, with an R5 astromech tending the cryogenically stored Orman and Silas Tagge with particularly evil looking eyes. And then when Luke is flying patrol in an X-Wing, the intakes for it's engines are semicircular rather than being circular. These are used on X-Wing's until the T-75 and T-80 models used in the First Order era.
This design comes from some of Ralph Mcquarrie's artwork for Star Wars, and were used as the basis for the Z-95 Headhunter. Which leads me to wonder if Luke is actually piloting a Z-95 in this issue, or whether it's once again a bit of a sloppy choice by the artist, basing his drawings on the concept art rather than actual pictures from the movie?