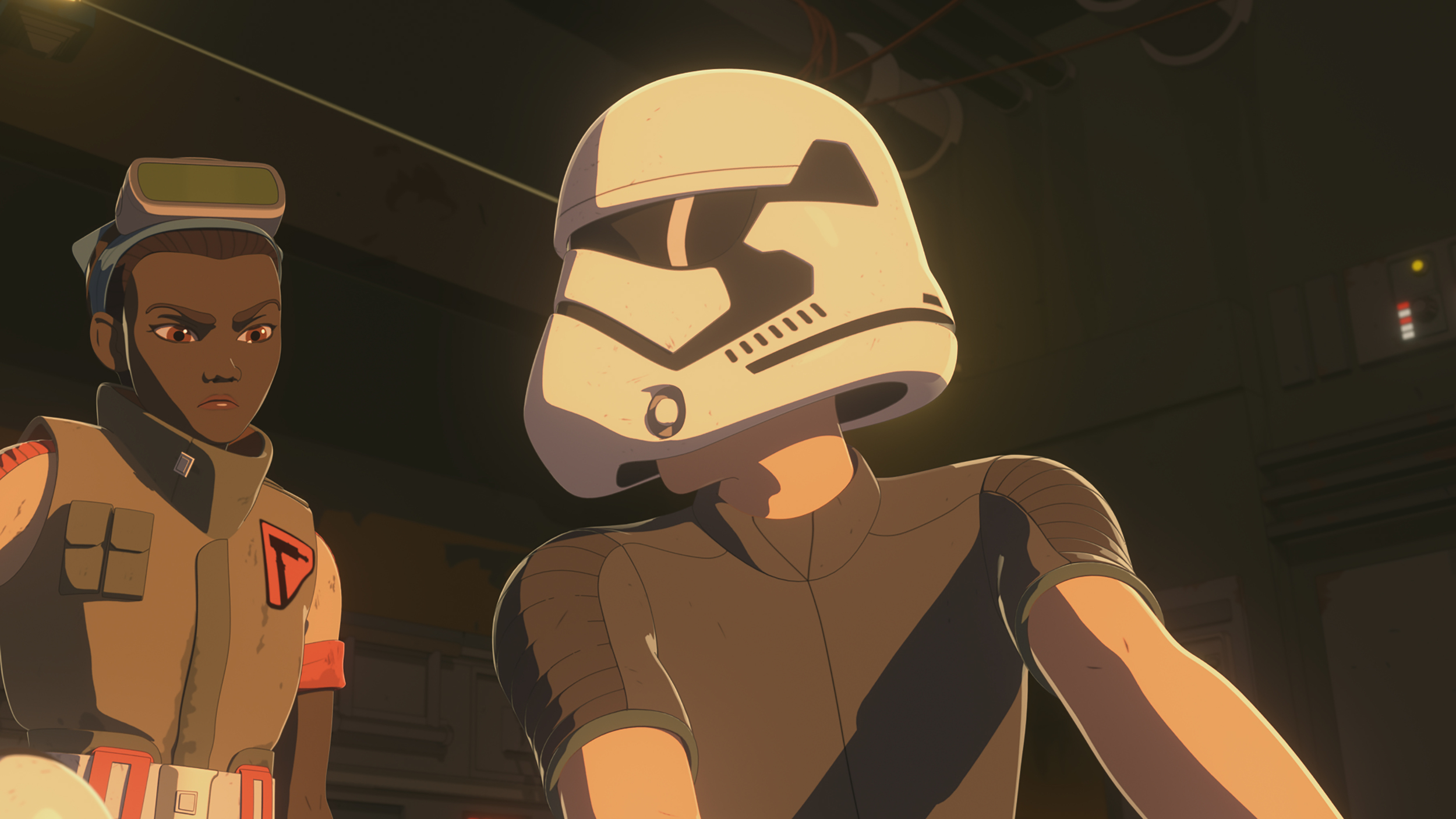 What is it ? : Kaz, Neeku, Tam and Yeager are discussing the First Order occupation of the platform, with Kaz not understanding how Tam and Neeku can have no problem with it and actually claim they feel safer. Yeager comments that many people felt safer under the Empire but had their rights crushed, but Tam is outraged, saying that her father worked in a factory for the Empire, which provided a safer life for his family.
Meanwhile the kids, Kel and Eila are fishing off the lower part of the platform when a Stormtrooper overhears them and asks for their identification. When they don't have any he tries to arrest them, but they throw fish at him, causing him to stumble, knock his head on a railing and fall into unconsciousness. They then head to Yeagers workshop to ask Kaz for help, taking him, Neeku, BB-8 and Tam to the unconscious body.
They stun the Stormtrooper further, then take him to the Chelidae, and Kaz takes his armour as a disguise to infiltrate the First Order computers to discover whether he reported the kids.
A First Order officer spots him and takes him to the market where an anti-First Order riot is breaking out, which he uses as a distraction to sneak away. He makes his way to the Shuttle the First Order is using as their command centre, and discovers that the Stormtrooper hadn't reported the kids, and he steals some records from the system.
As he leaves the ship, he is spotted by officer, who orders him to accompany them, and takes him to Commander Doza's office where Commander Pyre is talking with Doza. Pyre asks Doza to leave, which he does under protest, reminding him that this is his platform. Kaz is then asked to make a report which he stumbles his way through, Pyre then turns to the officer, telling him that agrees that this trooper needs a memory wipe and reprogramming.
Kaz protests, and escapes under fire from the Stormtroopers, heading back to the market where he once again gets caught in the riot.
He rendezvouses with Neeku and Kaz who have the unconscious trooper, quickly swap him back into the armour, so when the officer and Stormtroopers arrive tracking the armours location, they take the trooper who is dazed and only beginning to recover from his unconsciousness, away for reprogramming.
Kaz tells the kids that the First Order isn't aware of their presence, and is summoned into Yeagers office when they return to the workshop.
Kaz tells Yeager of the plans that he overhead in Doza's office, where they plan to seize the platform and remove any non compliant civilians. They then check the records that Kaz stole from the shuttle which reveal the locations of First Order fleets around the galaxy, which are vast and outnumber the New Republic itself. Seeing the size of the fleets, they realise they're going to need refuelling, which explains the First Orders interest in Colossus Platform.

High Points : Wow, this episode really steps up. An action packed story which moves the series plot forwards in a meaningful way, with good humour.
It's almost as if making the heroes fairly competent and giving them a good villain to work against is a successful way to make a TV show. Although there's some good chase scenes within the episode, most of it is Kaz sneaking around in disguise, and the tension is palpable. While Kaz is often incompetent, it kind of helps increase the tension (making me wonder if this idiot can actually avoid being caught).

Even the humour works, I particular enjoyed the scene where the Stormtrooper is dragged down a set of stairs, his head bouncing off each step, only to have Kaz exclaim, "He'll be fine! He's wearing a helmet!". But Neeku helpfully offer the reawakening Stormtrooper to get back to sleep, only to taser him back into unconscioussness, being a great scene too.

I must also mention the alien floor cleaner, last episode had a small alien cleaning the floors with some kind of floor buffing machine (you've seen the kind of thing in stores and factories), and the First Order seizing it as a background scene as Kaz was sneaking around. This episode had him return, now scrubbing the floor by hand. Although the shop makes a fairly cheap joke, with Kaz suggesting that he should get some kind of machine to help with that, it was a nice callback, and a sign that the First Orders presence is having a harmful effect on platform life (although why the First Order needed to seize a floor buffer, I'm not really sure).

Low Points : Although it kind of works in this episode, I'm still not a fan of Kaz's incompetence. He disguises himself as a Stormtrooper, and despite being a military officer himself (a pilot for the New Republic) doesn't seem to know how to make an official sounding report to an officer. The tension does really come from the viewer not being sure how long he can get away with being such a bumbling idiot.

While I can understand some people's personal experiences with the Galactic Empire having not been a bad one, with the Stormtroopers providing security, and the massive war effort providing jobs. But Tam's defence of not only the First Order, but the Empire is pretty much beyond belief. Unless she's the Star Wars version of a holocaust denier, she should be aware of the Death Star's, the brutal subjugation and extermination of entire worlds.
It should be the key policy of the New Republic to disseminate that information, "No matter how useless we are at our jobs, at least we never destroyed Alderaan!".
While she's obviously a member of the group least affected by the Empires policies (a human), the Tarkin doctrine, the Death Stars, and so many other brutal Imperial activities, she should at least be aware of some of them, and be adult enough to separate her father's job from the atrocities the organisation he worked for performed (probably by claiming he was forced).

I commented before about Torra overhearing the First Order talking about being responsible for her kidnapping by the pirates, and then promptly never mentioning it, or forgetting completely. Well, in this episode, Kaz overhears the First Order discussing only allowing people loyal to the First Order being allowed to stay on the station after they seize control. However by the time that he gets back to Yeager, he tells that he's not sure what they're planning, but it's not good for anyone aboard.
Could the writers actually read their own scripts, this is actually within the same episode, with Torra it could be explained by different script writers for different episodes. But here it must have been the same writer who forgot what Kaz had overheard. It's poor, it's clumsy, and kills any feeling of continuity within this series. (and definitely sets up a world where monologuing would be fine, as if the hero escaped, he would remember what you'd told him anyway).

So what do you really think ? : A pretty good episode, and one I enjoyed. If Resistance was more like this, I'd be fully behind it. We're actually getting something of what we were promised by the trailers, and by the series title, finally getting some Resistance vs First Order action, instead of the exciting adventures of a mechanics workshop.

Final Words : Well, six more episodes to go this season, and we're finally getting to the point where the series should really have been beginning.
Rather strangely the series seems to be attempting to deal with some pretty adult concepts (that no matter how brutal a regime, most of the people inside it aren't evil), while simultaneously being incredibly childish and simplistic in it's story telling style.