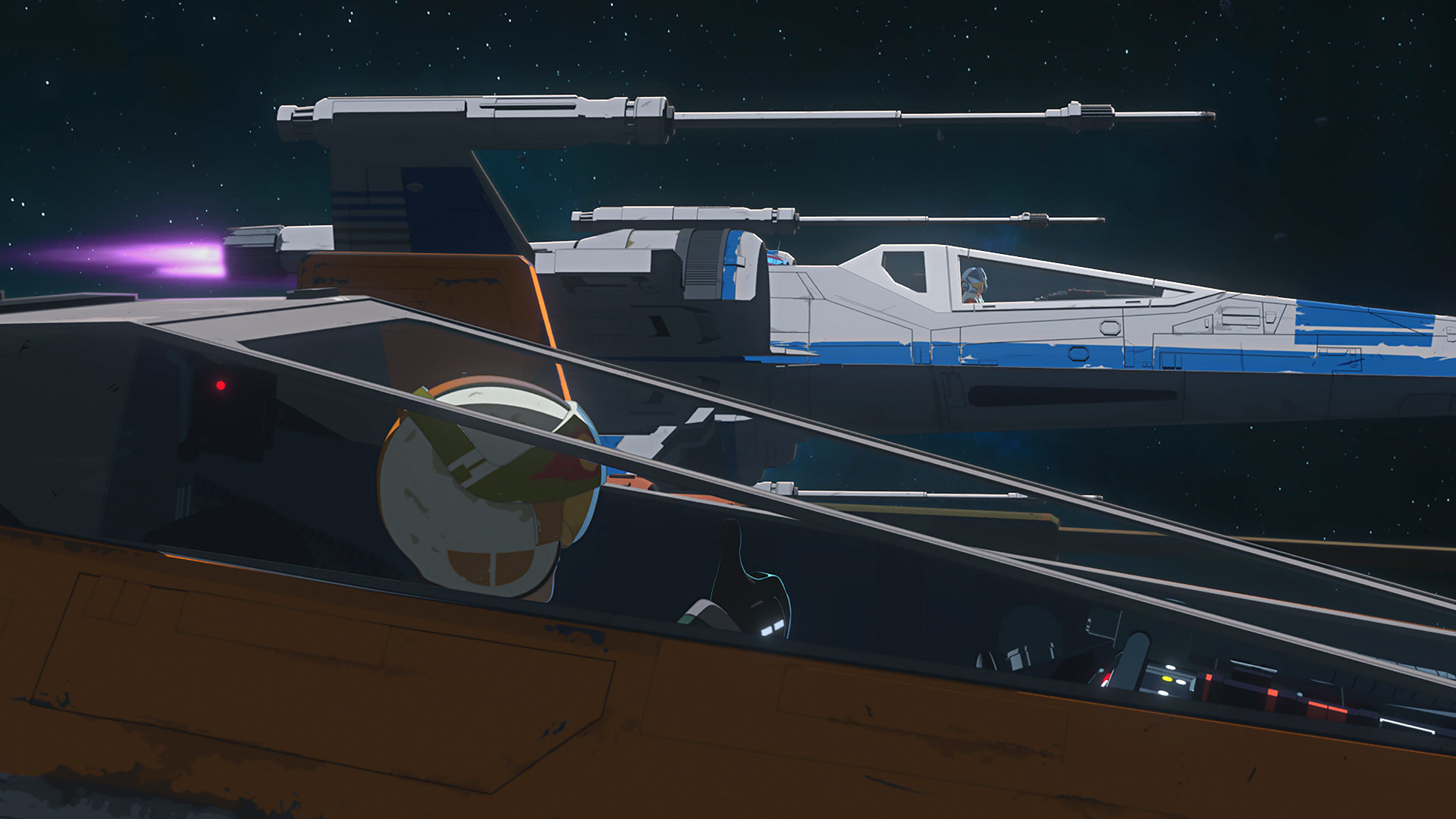 What is it ? : Kaz is attempting to contact Poe Dameron to brief him on the data he has obtained from the first order, although the device he has built to breach the First Order jamming field seems at first to work, they realise that Poe is actually in the room.
Kaz briefs him, and Poe reveals he is actually here to retrieve BB-8 for a mission to Jakku.
Poe is surprised by the number of First Order ships, and he and Kaz leave Colossus station to verify the data. They sneak off the station past the First Order Patrols, by loading the Fireball onto a freighter, and dropping free once the ship is away from the station. However as usual the Fireballs engines aren't reliable, and they nearly impact the ocean before they kick in.
Rendezvousing with Poe's X-Wing they make the jump to Hyperspace emerging where a star system should be, but the star is completely gone. The planets remain, but are cracked open.
They detect one which has a large hole tunneled through it, and head in to explore, but are effected by the gravity well inside. Struggling with their controls they manage to emerge on the far side where they detect a signal coming from one of the moons.
Landing to investigate, they find an abandoned village, peppered with blaster fire, and Kaz finds a child's toy and they realise that the First Order have massacred the occupants to help cover up whatever happened to this system.
The come under attack from a First Order Probe Droid, which releases Seeker drones to attack them. Poe takes out the seekers, while BB-8 tethers the Probe Droid giving Kaz chance at a lucky shot to destroy it.
They then come under fire from First Order Tie Fighters, led by the red Tie Interceptor of Elrik Vonreg. Launching their fighters, they lead him and his squadron back into the tunnel through the planet, causing them to lose control and Vonreg retreats.
Kaz and Poe exchange Astromech droids, with CB-23 helping Kaz sneak back into the Colossus, only to find Tam complaining about him avoiding work. She further becomes antagonised by Yeagers insistance that there's things she wouldn't understand, and Kaz tells Yeager secretly that the First Order is worse than he ever thought.

High Points : Wow, two episodes in a row which are good.
It's great to see Resistance finally moving on with it's plot and telling an interesting and compelling story. We've finally got the First Order as a villain and the hero flying against them, amazing to see how good the show can be when it finally performs it's premise.
And not only does it find a story, it's found it's heart too. When Kaz discovers the child's toy in the village, and realises that the First Order aren't just the bad guys, but they're child murderers too, he's stunned, and it actually makes the events of the series have some gravitas

Low Points : Well, as always my main complaint about Resistance is it's treatment of Kaz, not only is he useless throughout this episode, the communication system he builds is the butt of jokes, he only manages to shoot the Probe Droid by accident when he falls over, and in the climactic battle he doesn't even shoot once.
It's bad enough that they ignore the fact that he was being complemented for his technical skills only a couple of episodes ago, and I can live with Kaz being bad with a pistol, as that has been shown on numerous occasions. But he's supposed to be an ace pilot, so the fact that even Poe, who in the past has been the one character who praises Kaz, is now openly mocking him, makes him more of a joke character than ever.
And while I can kind of understand not wanting the hero in a kids series to be a killer, even if I don't agree with it, the fact that he doesn't even fire a shot at the First Order, just after they've been shown to be child murderers just makes Kaz useless, especially in a Star Wars series.

So, at the beginning of the episode, Poe Dameron has managed to sneak onto Colossus station. Which shows he has impressive skills, since he's decides to sneak on to the station while wearing his bright orange Resistance flight suit emblazoned with the Resistance symbol.
When Poe was introduced in The Force Awakens he wore less obvious clothing, so why are they forcing him into this outfit here, when it's so out of place.
My very first Star Wars RPG character was a Rebel Pilot, who was terrible at stealth. And we used to joke that it was because of his orange flight suit. Something which we took to be a joke, now turns out to be true of Poe Dameron.
And we thought that Kaz was supposed to be the inept spy!

And while I'm loving that Resistance is moving forwards through the timeline, edging to only days before the events of The Force Awakens, I'm left a little unsatisfied.
While we now know that Poe is retrieving BB-8 for his mission to Jakku and the events of the movie, I somehow thought that Resistance would be tied into that a little more. We've had Kaz witness the after effects of testing Starkiller Base. But they only discover that after Poe has been ordered to go to Jakku to retrieve the map piece to find Luke.
I would like to have seen Kaz involved in the lead up to this. Maybe helping discover that the map piece is on Jakku, maybe his discoveries about the First Order would make Leia so concerned that she felt the need to find Luke.
But what we've seen on screen doesn't tie Kaz's actions into the movies at all, only as witness to the events.
Where Rebels had the heroes rescuing Wedge, and handing Y-Wing fighters over to General Dodonna, actions which would eventually contribute to the Rebel victory. Resistance is detached from the movies so far, and feels unimportant because of that.

So what do you really think ? : It's lovely to see Resistance manage to start telling it's own story connected to the movies, and living up to the premise that we were promised. When we're seeing Kaz acting for the Resistance and combating the First Order the show is pretty good compared to when we just see Kaz struggling to be a maintenance apprentice, or working in a shop.
My one concern is that we're now only days before the events of The Force Awakens, and with it and The Last Jedi happening only days apart, we're going to be after the events of the movie and back into uncharted territory.
That said, season 2 of Resistance should start later this year, just before the release of Episode 9. Meaning that the series can lay the groundwork for that movie, and assuming a decent jump in time between Episodes 8+9, the show can then let us witness the rebuilding of the Resistance after the events of the Last Jedi.

Final Words : In my last review I commented on Tam's holocaust denial like attitude towards the Empire and The First Order, and either in my review or in the comments beneath I expressed a desire that they should turn Tam into an antagonist for the series.
Having her join the First Order and work against Kaz, since she seems to despise everything he stands for, from his politics to his work ethic.
The events at the end of this episode have led to me having hope that they might actually be considering something like that.
I really think that it would be a great change to the show, not only making a real antagonist for the series (they treat Phasma and Pyre like antagonists, but they don't even know Kaz exists, never mind actually working against him). Having Tam either working as a First Order spy within the workshop, or formally joining the First Order, and hunting down her former friends would add so much the series is missing, and provide a twist of "I am your father" level proportions.

Sadly, I think it's far more likely that in the next couple of episodes, Tam will "realise" the evil of the First Order, probably when Kaz's family die on Hosnian Prime.