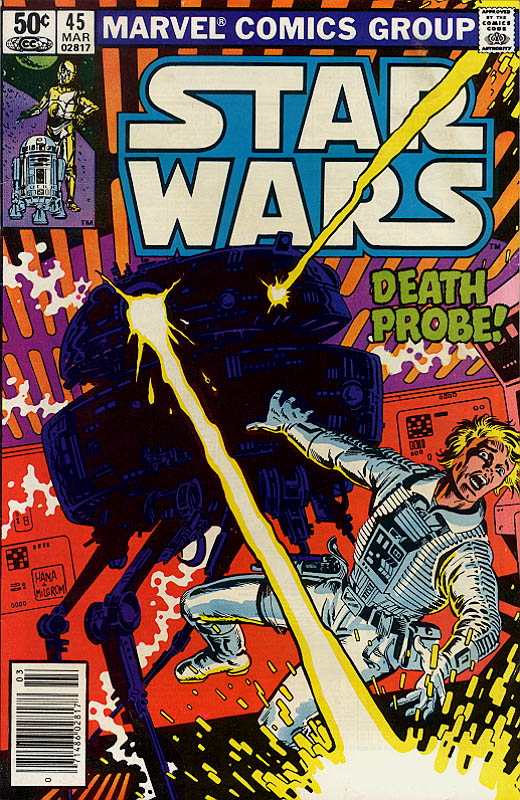 What is it ? : A battle damaged Rebel Blockade Runner is attempting to return to the Rebel Fleet shortly after the Battle of Hoth. Their long range sensors are down, but they detect something approaching at short range, it rams their ship and an Imperial Probe Droid begins fighting it's way through the ship killing the crew, until it reaches the computer centre and plugs itself into the systems taking control of the vessel.
Imperial Admiral Damon Krell, receives notification of it's progress aboard his Star Destroyer, and is pleased that the modifications he authorised for the droid are holding up.
Meanwhile Luke Skywalker is flying an X-Wing on a wide patrol around the Rebel Fleet, he is a little distracted from this take as he mulls over the events of the Empire Strikes Back, pondering whether Vader was telling the truth with the revelation that he was Luke's father, but his senses tell him that Vader was being truthful.
He detects the returning Blockade Runner, which opens fire on his fighter, destroying it. Fortunately he sensed the attack, and he and R2 ejected in time. Using the force to guide the two of them towards the vessel, he narrowly avoids the ships weapons as they are fired again at him. But R2 magnetizes to the ships hull and Luke cuts his way in with his lightsaber.
Inside, the two narrowly avoid being vaporised by the ships welding systems reacting to the hole he has cut into the hull, and begin exploring the ship. They enter the cargo hold and come under attack by cargo loading droids, which first physically attack them, then being dropping fuel into the hold to burn them out.
Admiral Krell receives updates about the Rebel interloper aboard the Blockade Runner, and orders the Probe Droid to enter it's final sequence, hoping to complete it before the interloper interferes.
Luke realises that all of the dangers he has faced are automated, so heads to the ships computer centre to discover their source, finding the Probe Droid plugged into all of the ships systems. It forces him from the room under fire, and Luke has R2 connect to a terminal to find out what is happening. R2 discovers the ship is on course for the Rebel Fleet, it's engines set to overload.
As one of their own, the Blockade Runner will be allowed to approach the fleet, and the detonation of it's engines will take out numerous unprepared Rebel ships. This angers Luke, who lashes out with a cry of "I'm Luke Skywalker, destroyer of the Death Star. I battled Darth Vader and lived to tell about it." The droid monitors this, and reacts by overloading a conduit in the corridor, knocking Luke unconscious.
The Blockade Runner swerves away from the Rebel Fleet, alerting it's patrolling X-Wings that something is wrong, and they attack. Meanwhile Admiral Krell is informed that the Probe Droid is reacting to programming which overrules his own, orders placed by Darth Vader.
The Probe Droid begins returning to the Empire with its cargo of Luke Skywalker. Accelerating and preparing for the jump to hyperspace as it shrugs off the attacks by the X-Wings.
Luke awakens, and begins cutting controls in the cockpit to reduce the control of the Probe Droid over the vessel, managing to leap aboard an Escape Pod just as the ship jumps to hyperspace.
Admiral Krell decides that he can salvage some prestige from the mission, as returning Luke to Vader will be a success, but as the Probe Droid returns the Blockade Runner to the Star Destroyer he realises that the ships engines are still about to detonate, so orders his ship to open fire, but too late as the Blockade Runner crashes into his ship, the explosion tearing both apart.
As the X-Wings take Luke's escape pod back to the Rebel Fleet, Luke comments to R2 that he'd wanted to check how well he'd recuperated from his duel with Vader, but didn't realise it would be that much of a test.

High Points : Another of the stories I really remember from my youth, and it's as action packed as I remember. Luke's battle through the Blockade Runner is great, with numerous challenges, and the Probe Droid comes across as an excellent opponent, especially malevolent in the insidious nature of being hooked into the ships systems, like a spider in the centre of a web.

The resolution is especially rewarding, Admiral Krell couldn't possibly have seen that Luke's mere presence would activate Vader's programming deep in all Probe Droids to return Luke's location to him. And although Krell might have made a nice opponent to carry on over several issues, this is after all Star Wars, so ending it with an explosion is always a good thing.

I must also point out how well this issue connects to The Empire Strikes Back, with mentions of Luke recuperating from his surgery to replace his hand, the Rebel Fleet hiding in space after the loss of Hoth, etc. The story fits perfectly into the time period, and doesn't seem out of place at all, unlike some of the comic stories. The concept that Luke battled a Probe Droid which seized control of a Rebel ship in the days after Bespin fits perfectly into Star Wars continuity.

Low Points : There's only one point I really feel the need to mention. Luke's Lightsaber!
Where'd he get that then? His was lost on Bespin, and as far as we know he didn't make a new one until shortly before Return of the Jedi and the rescue attempt on Han Solo.
While in theory, the Rebels might have had one laying around from the time of the Old Republic that he could borrow, and the one he builds on Tatooine is "his" new lightsaber, there's no explanation, just Luke Skywalker swinging a lightsaber, and I have to admit as a kid I never noticed.

So what do you really think ? : This is a strong story, and definitely one you could rip off for a Star Wars RPG adventure. It's fast moving, isn't outlandish in what occurs, seemingly totally in character for Luke and R2, and fitting into the continuity and world of Star Wars. It's one I really enjoyed.

Final Words : Well, we're now into the run of absolutely classic tales in the Star Wars comics, with memorable story after memorable story for maybe the next 10 issues or so. The question I find myself wondering is, why don't I remember the stories after that? Did I stop reading? Were they just not memorable. And if I stopped reading, was it because the quality of the stories went down, or just because as a fickle kid, my interest fell elsewhere to whatever new shiny thing attracted my attention (I remember reading Marvel's Doctor Who Weekly, and Marvels Blakes 7 Magazine around the same time, so it's possible my parents just didn't let me get 3 different comic books at the same time).