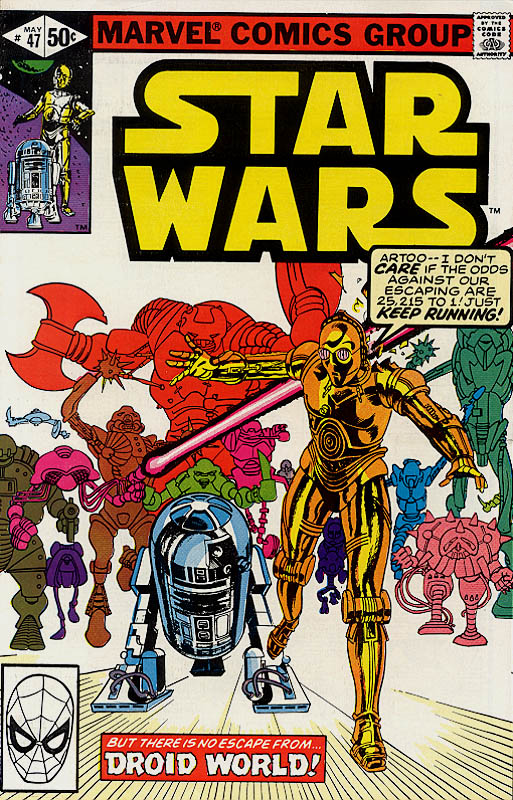 What is it ? : We pick up straight into the action with R2-D2 and C-3P0 being chased down a corridor by a tank-like vehicle, when the corridor comes to a sudden end with a drop down into a fiery pit. C-3P0 considers how they reached here.
Some days earlier Luke's transport ship has redezvoused with a Rebel Capital Ship, the Rebels have captured a massive Imperial Warbot, and R2-D2 is analysing it's circuitry to give the Rebels some advantage in dealing with them in the future. However a mistake on his part leads to a power surge which fuses the systems of the Warbot.
The Rebel commander suggests that Kligson's Moon might be able to help, Kligson is a master droid engineer, a cyborg injured in the Clone Wars, who doesn't allow any organics on his moon, but knows more about repairing droids than anyone.
Taking the Warbot there, Kligson agrees to allow R2 and 3P0 aboard his massive vessel, which people call Droid World, and will repair the Warbot, but keep it. They agree, with the idea that R2 will be able to scan the Warbots mechanisms, which is the data they were wanting, and far more important than having the physical Warbot.
The are met by a prototype droid Stormtrooper, called ZX-3, and watch as the Warbot is scanned and determined to be irreparable. Kligson orders the Warbot melted down, and R2 and 3P0 to have their restraining bolts removed so they can live free, but after 3P0 protests that they enjoy working for Luke, Kligson orders them brought to him.
ZX-3 explains that he was designed to replace Stormtroopers in dangerous atmospheres, but was deemed to be a failure, but Kligson acquired him and has given him a second chance here, before directing the two to Kligson and excusing himself for other duties.
R2 is curious and follows ZX-3, so 3P0 meets Kligson alone, and R2 witnesses ZX-3 salvaging the weapon head from the Warbot to replace the damaged one on a Warbot they already have. R2 is spotted and comes under attack, retreating to Kligson, who is arguing with 3P0 that both the Rebels and the Imperials spread war and are therefore as bad as each other.
R2 tries to warn Kligson of the events he witnessed, but ZX-3 enters wearing a blaster harness, and shoots Kligson killing him, gloating over the body that the Imperial cause now rules Droid World.
R2 and 3P0 find themselves chased through the corridors, pursued by not only the now repaired Warbot, but also by droids aboard an armoured tank-like vehicle, arriving at the fiery pit which is where we entered.
They fall into the pit, but are caught by magnets, finding themselves rescued by Kligson, who explains that the body they met before which ZX-3 destroyed was just a droid duplicate as he suspected ZX-3 might be working against him.
He knew bringing Rebel droids aboard would make ZX-3 trigger his plan, and Kligson also needed some parts from their Warbot for a much larger one he had captured.
Activating the massive Warbot, it tears it's way through ZX-3's forces, and Kligson sheds tears over the body of ZX-3 when Droid World is safely back in his hands. R2 and 3P0 return to Luke, and watch as vents open on Kligsons world, revealing engines, and Droid World flies off into space away from the war that Kligson hates.

High Points : Another absolute stormer of an Issue, although the Warbot isn't something we've seen before or again in Star Wars, and does seem a little out of place, the idea of a Clone Wars Veteran, massively injured, creating a safe place for the beloved droids he repairs is a solid one.
Personally ZX-3 has stuck with me over the years, his design is reminiscent of Stormtroopers while being somehow more droidy, and he is the perfect counterpart to the way they portray R2 and 3P0 in the comics. The relationship they usually show the 2 droids having is more of a friendship with Luke rather than the slave/master relationship that the galaxy expects, and this is seen as unusual. But this time, ZX-3 is equally as loyal to the Empire, although he was cast aside as a failure. He wants to prove himself by capturing Droid World for the Empire, to show that his design isn't a failure.

Low Points : My only, and it's minor, criticism of this issue is the fake out cliffhanger at the beginning, literally showing the droids come to a cliffs edge over a fiery pit, flash back to the events leading up to it, then reveal that they are rescued after all. It's a pretty weak bit of storytelling, even if it is a fairly good homage to the old serials (Flash Gordon, King of the Rocketmen, etc) that Star Wars is itself a homage to.

So what do you really think ? : Realistically speaking, not too much happens in this issue, but we're shown such amazing sights along the way, massive Imperial Warbots bristling with weapons, prototype droid Stormtroopers, a cyborg Clone Wars Veteran and his entire world of droids that he has freed. It's a wonder to behold, even if the heroes are basically witnesses to the entire story, not having any particular influence in it at all. In fact Luke sits passively in his starship throughout, not even being allowed to board Kligsons Moon. But the issue is still a wonder to behold.

Final Words : As should be obvious, I adore this issue, another that I remember clearly some 40 years later.
In fact this is the single issue that made me want to re-read and review the entire Marvel Comics run, as I wanted to get to this point and be able to stat out ZX-3 and the Warbot. Everything up until now has been building to this moment for me, I wonder if reading the rest of the Marvel run is now going to be disappointing?