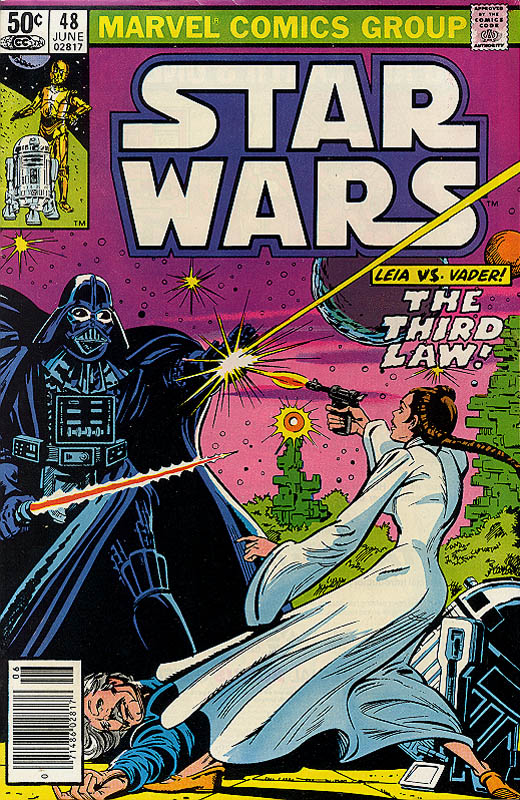 What is it ? : Princess Leia arrives on the banking world of Aargau accompanied by Viscount Tardi, the finance minister of the Rebellion and R2-D2 and C-3P0. They are visiting to arrange finance to fund purchase of new X-Wings, and as they arrive their identities are verified and they have the three laws of Aargau explained to them, no unauthorised removal of precious metals from the planet, no weapons by private citizens, and no defrauding the bank.
So relaxed are the laws, that only people leaving the planet are scanned, to ensure that no one steals from the bank. Leia spots Darth Vader arriving at the planet at the same time as her, and they both witness Aargau law in action as someone being scanned on leaving is found to have ribs replaced with gold, and is gunned down and killed.
Leia comments on Vaders lack of a Stormtrooper escort, saying that they're not much use without their blasters, and Vader responds, saying that all he has brought with him is his Valet, his Porter and his Secretary.
Leia points out that the three are a high gravity Rigellian, a shapeshifter and a telekinetic, and likely all trained members of the Assassins Guild.
After Vader leaves, Leia mentions that he is likely here to sabotage the Rebellions loan by killing Tardi, as he is the only one with the status that the bank will trust.
The next day while travelling by speeder, they pass under a bridge and Vaders porter, the High Gravity Rigellian jumps from the bridge, smashing their speeder. But as he attacks, Leia activates a device and he disappears, which Vader reports to the police as her using a weapon on his porter. Leia points out she never killed the porter, and it wasn't a weapon, merely a gravity manipulator, which increased his mass, sending the already heavy creature straight towards the centre of the planet when it's surface wasn't capable of holding him any more.
Later in the day at a diplomatic function in the Aargau garden of butterflies, and C-3P0 reveals that he was once owned by a collector of butterflies and programmed to recognise every species. He spots one he knows has been extinct for a century, and that it is venomous and about to sting Viscount Tardi, Leia has R2-D2 spray it with a fire extinguisher, and then stomps it, acting innocent as she asks Vader whether he has anything to wipe up the mess. But with his shapeshifting secretary dead, he silently leaves.
Next they are at an air display, where Aargau is displaying the power of its air force, and they watch the Aargau speeders firing missiles. Vaders telekinetic Valet, retargets one of the missiles to strike Tardi, only to be killed by the missile itself, and Leia reveals that R2-D2 has been projecting an image of Tardi over the Valet, and the Valet over Tardi.
That night, C-3P0 receives a message from Vader that he wants to meet with Leia and Tardi at the old spaceport, Leia comments that it's exactly where she would have chosen for a secret meeting as well, and turns up at the appointed time with Tardi and R2-D2.
Vader reveals he has been carrying his lightsaber in his diplomatic pouch all along, and strikes down Tardi killing him. Leia reveals she has her blaster and fends him off as she gets R2-D2 to reveals that he has recorded Vaders murder, and use of an illegal weapon. Vader threatens to destroy R2 and the recording, but Leia reveals that the recording was also sent to C-3P0 who is waiting to deliver it to the authorities.
Leia then reveals her master plan, that Tardi had died a number of weeks ago, and the Rebellion replaced him with a replica droid to complete the deal on Aargau. However, the scan on leaving the world would have detected his artificial nature, so Leia relied on Vader acting illegally to kill Tardi, and therefore have to help cover it up.
But Vader pulls a switch, revealing he was never trying to stop Leia from getting the loan, as it was considered insignificant by the Empire, and his real mission was to steal the Royal Jewels of Alderaan that Leia was using as collateral against the loan. He was simply here to ensure that Tardi's nature was never discovered, as any inconsistencies in the deal would lead to the discovery that the Jewels had been taken. As he leaves, he warns Leia to not reveal anything to the Aargau authorities, as exposure will do evil things to her credit rating.

High Points : Another cracking story in this run, which has some fun assassination attempts, and a wonderful devious ending worthy of Agatha Christie.
Vader's Valet, Secretary and Porter, although only in it briefly are memorable and interesting. And the whole issue is an interesting premise, which although now doesn't match up to what we know of the Star Wars Universe, did provide an interesting alternative, where the Galactic Civil War was being observed and somewhat funded by uninvolved planets.

Low Points : Putting the three assassins into the one issue is perhaps too much, because each only briefly gets to make their attempt on Tardi and be defeated by Leia's cleverness and knowledge of their abilities, not getting any real chance to shine in the spotlight as each probably deserved to do.

I must also ask what Vader is basically robbing a bank in this issue, why does he want the Royal Jewels of Alderaan? It's never explained. Putting something into the story about needing them so the Empire can use them to delegitimize Leia, or protect themselves from bad publicity about the destruction of Alderaan. But we get told nothing, so perhaps Vader just wants some pretty Jewels.

So what do you really think ? : A good romp, even if it doesn't particularly well fit within the Star Wars Universe, with Aargau seemingly not having any fear of the Empire and will happily and publically fund the Rebellion, and the contrived rules so the Android Tardi could pass through customs into Aargau, but would be detected when he tried to leave.

And I have to at least question the sensors that are used to detect the smuggler at the start, when they detected his gold ribs. If someone took in a 3P0 droid, and replaced all of it's covering with solid gold, would that be detected? The wiring inside an Astromech?
The smuggler obviously thought he had a chance to get through with his gold ribs, so are the sensors a new addition? I've so many questions about ways to get through Aargau security, none of which are important, but I'm curious never-the-less.

Final Words : A little weaker than the previous issues since Empire Strikes Back, but an enjoyable tale.
Although I clearly remember this issue, and all of those around it, I have to admit the next issue I have no memories of, and given it's name, perhaps I should.