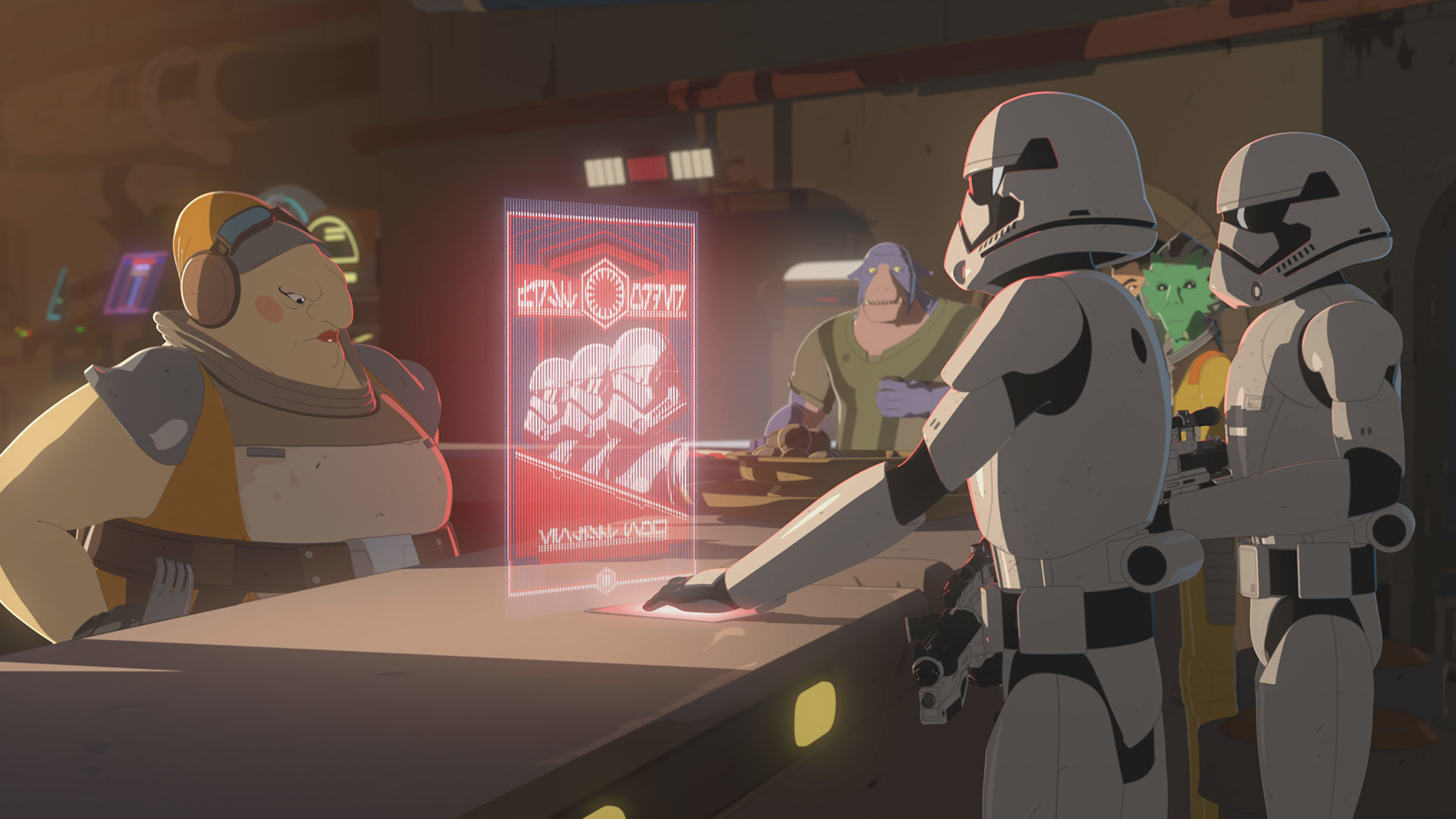 What is it ? : Kaz and the others are watching the Aces race, a brief moment when they can ignore the First Order occupation of the platform, but meanwhile Commander Doza is contacted by Pyre who suggests cancelling the races as they are a security risk. Doza refuses, but later is visited in person by Pyre, who informs him the races have to be cancelled, and that Doza must inform the Ace's that not only are the races cancelled, but they are grounded to avoid interfering with the First Order patrols.
Doza tells the Aces, but Hype Fazon doesn't react well, telling Doza to get it fixed. Doza shares with his daughter that he feels it's only a matter of time until they seize control completely.
When they hear of the cancelled races, Tam reacts by saying that it's a price worth paying for security, and that the First Order are more professional and successful than the Ace's, shown by the lack of any further Pirate activity since they took control.
Heading to the bar, they witness a First Order droid throwing it's weight around, when Torra arrives, telling Kaz that she can't find Faze. Tam overhears and asks a Stormtrooper where Faze is, and he checks in with control, informing them that Faze departed the station that morning.
The Stormtroopers attempt to get the bartender, Aunt Z to put up recruitment adverts around the bar, but she is hostile to the fact, telling them that they are the problem.
Kaz and Torra check out the hangar to check whether Faze has indeed left in his fighter, only to discover it's still locked down, and they overhear Stormtrooper discussing how it's going to be scrapped.
Back at the bar, they discover that Aunt Z is now missing as well.
Heading back to the garage, Kaz and Torra bursts in to speak to Yeager, only to find him talking with Commander Doza, they reveal they are attempting to contact the Resistance for help removing the First Order from the platform. Kaz and Torra tell them about the missing people, and Commander Doza reveals they are being held at the docks before being shipped off platform.
Yeager urges Kaz to wait for Resistance aid to help their friends, when Kaz snaps that they don't have time for that, and Yeager crumples and agrees, wishing him luck.
Kaz and Torra sneak into the docks, and find Faze and Aunt Z locked in a cargo container, Kaz reveals that he doesn't want to rescue them and release them back onto the Platform, as the First Order will realise quickly and clamp down on security, capturing them again.
His plan is to help them commandeer the shuttle they are to be shipped aboard, so they can leave, and hopefully it won't be realised for some time.
As the prisoners are taken aboard, Kaz and Torra attack the guards, and with Faze and Aunt Z's help they defeat them. Faze agrees to pilot the ship, and Aunt Z says she's got a friend on Takodana who will help.
Kaz returns to the Garage, only to find that Pyre and Stormtroopers are there already, and everyone is under arrest.

High Points : Well, wow, there's quite a bit packed into this episode, and I have to admit even the humour works quite well, with a couple of laugh out loud moments.
The series is really starting to feel more Star Wars, with them working in occupied territory, under the watchful eye of the Empire First Order..
It's also nice to see all of the characters to come together, with Torra, Commander Doza and Yeager all definitely on the Resistance side of things, even if Tam is still a First Order sympathiser.
Even Kaz behaves consistently heroically, even if he stumbles around and falls over at one point, but for the majority of the episode he's definitely acting like a hero, showing leadership skills, and making good plans and decisions. And most importantly for Resistance, he is recognised as doing so by Yeager and Aunt Z, both of whom have often treated him like the fool.

Low Points : The cancellation of the Races seems like it should be of far bigger importance to the platform than it's treated, and Tam being blind to it in her support of The First Order continues to stretch credibility.
Much of the economy of the Platform seems to be around the Aces, and the sole reason they stay and protect the place is that they can win big in the races.
Without the gambling which draws in money, I can't see much other business that goes on, apart from the salvage of Clone Wars wreckage from the ocean floor.
And without their winnings, the racers will just move on, removing all need for the support services which have sprung up around them repairing and maintaining their ships. This is a dire economic crash for the platform and it's inhabitants.
And returning to Tam for a moment, not only has her future career as a racer disappeared, but given the loss of Racer repair and maintenance work, perhaps her current career.
But that said, perhaps she's taken those recruitment posters seriously, which as I've said previously would make a pretty interesting direction for the series to go in.

So what do you really think ? : While not as great as the past couple of episodes, this one was pretty solid, with an interesting plot, good dialogue, and some nice action scenes, I really hope that Resistance keeps going in this manner.

Final Words : Well, 2 episodes to go until the end of this season. And while I'd love to see the effects of The Force Awakens (and the death of Kaz's family and everyone he has ever loved), I'm starting to think that we're not really going to see that, except perhaps as a season cliffhanger (maybe with Kaz witnessing it, but not knowing what it is, but we will?).
It looks as if we're going to get a couple of episodes of them having to free Colossus station from the First Order, with the events of The Force Awakens and The Last Jedi impacting on the first part of the next season.
But then again, I could be wrong . . . and often am.