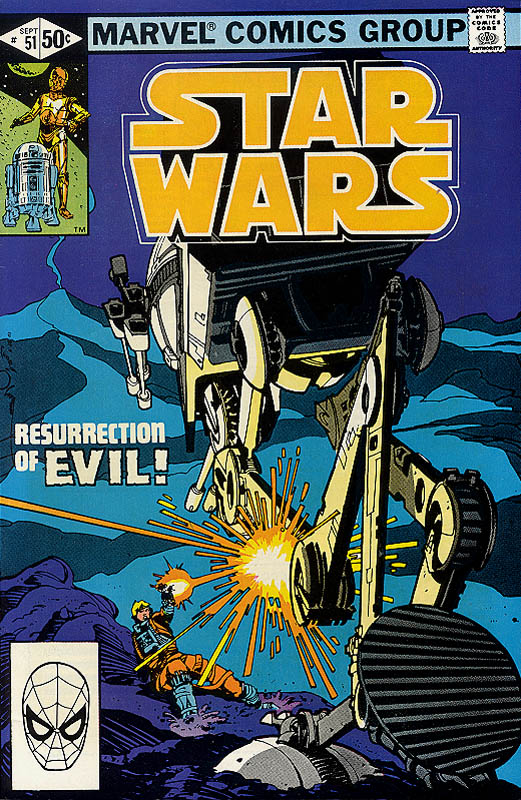 What is it ? : The Rebel Fleet is in deep space when a patrolling X-Wing returns out of control, the fleet fires at the fighter as it speeds past them, disabling it's weapons and recovering the cockpit of the ship. Aboard they find the pilot grasping a message pod which they pass onto General Rieekan.
Meanwhile, Princess Leia and C-3P0 are exploring a jungle planet they are considering using as a home for the new Rebel base after Hoth was lost during the events of The Empire Strikes Back. They are attacked by Gundarks, so dismiss this as a possibility, and as they depart they are summoned back to the Rebel Fleet.
Luke Skywalker is checking out a small muddy moon for the same reason, and is exploring an area where they detected something metallic. He discovers an Imperial communications array and realises the moon is already home to a hidden Imperial base. As he tries to leave he comes under attack by a scout walker, which he ambushes by hiding in the mud, cutting one of its legs away with his lightsaber. He reaches his X-Wing to leave, when he comes under fire from an AT-At walker, but swoops away into space, receiving a communication from General Rieekan to return to the Rebel Fleet.
Lando Calrissian and Chewbacca are chasing down a gunrunner who can tell them where Boba Fett has taken Han Solo, when they also get a communication from General Rieekan, that they should return to the fleet as a threat to millions of lives has been discovered.
Back at the Fleet, General Rieekan briefs the heroes, the Empire has taken the main weapon from the Death Star and mounted it to some engines and massive shield generators which are more powerful than anything seen before. This weapon that they've called the Tarkin, could prove to be far more dangerous than the Death Star since there seem to be no weaknesses to exploit from outside the ship. So he has brought in the heroes, as they have experience aboard the Death Star, to infiltrate the new station while it is under construction, and destroy it by covert methods. Lando however is to be left behind as he doesn't have that experience, and his betrayal of Han on Bespin means that he is not trusted.
Darth Vader receives the information that Luke managed to slip away from the Imperial forces on the muddy moon, and uses the force to compel the commander to walk out of an airlock into space.
The Millenium Falcon takes Chewbacca, Luke, Leia and the Droids to the world of Hockaleg, where a garrison town is the base for many of the workers on The Tarkin. Noticing that the workers all wear the same Standard Uniforms, Leia lures some of them into an alley with her feminine wiles, where Chewbacca knocks them unconscious, and Luke and Leia steal their clothes.
Luke then uses the force to convince the Stormtrooper guarding the worker transport to the Tarkin that their group is allowed aboard and is taken to the nearly complete battle station.
As they board the station, Vader is there, and orders that the security around the power reactors should be removed, as he detects Luke Skywalker's presence, and intends to capture him himself.
The officer complies, then heads down into the station where a meeting of a number of lower ranking officers is being held. They discuss Vaders murder of officers for making human failures, and agree that for the good of the Empire, that Darth Vader must die.

High Points : Although there isn't much action in the main plot, this issue does provide an interesting way for the heroes to get involved, all being summoned from their own little stories and pieces of action to receive the briefing and be dispatched to deal with a galaxy threatening danger.
I'm also very impressed with the B Plot, where Vader (in an innovative new way) kills an Imperial officer, who are getting more than a little tired of him pulling these stunts, so decide to kill him. It makes a whole load of sense for them to be concerned that for very minor infractions, he murders them. And it hooks back into Vader being outside the chain of command, as he was shown in A New Hope, where officers objected to his "sorcerer's ways".

Low Points : The exclusion of Lando feels arbitrary, although understandable, not sending him on a mission because he isn't trusted. But they happily let him walk around Rebel bases and the fleet, coming and going as he pleases. So if they really thought that he might betray them, then they're doing a terrible job of minimising the harm he could do.

So what do you really think ? : A solid issue with an interesting plot. Perhaps the best thing I can say to demonstrate that is, the fact that they've introduced a new planet killing space station, and it's one of the less interesting things going on in the issue.

Final Words : The comic tends to dispatch plots extremely quickly, not allowing the story time to hang around. Which means that the Tarkin will probably be destroyed next issue, which is a pity as this story feels like it's got enough going on to be explored for a number of issues. But at a guess, the heroes will be ambushed by Vader, but his betrayal by the officers will allow them to escape and the station to be destroyed. Oh, and Lando will save them at the last minute, proving his loyalty.
Not that the writers aren't imaginative, but when they're given so little time to explore ideas, then they've just got to wrap things up in as straightforwards a manner as possible. But we'll see how accurate my prediction is next issue.