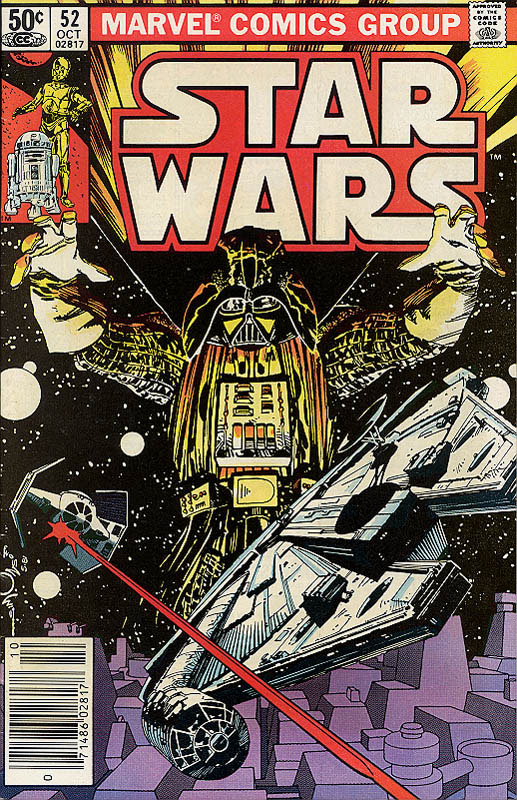 What is it ? : The heroes, Luke, Leia, Chewbacca, R2-D2 and C-3PO board the Tarkin, attempting to fit in as construction workers, but a scanning team of Stormtroopers detect the Proton Grenades they are carrying to sabotage the station with. Forcing them to fight and then split up to complete their tasks.
In the command center, the disturbance is detected and Darth Vader is informed, who, having sensed Luke's presence plans to deal with him personally at the main power reactor. The Imperial Officer who informed him, heads down a few decks to a rendezvous with other officers, part of the conspiracy to eliminate Vader, and they prepare to spring their trap.
Meanwhile aboard the Millennium Falcon which is on the planet below the station, Lando Calrissian emerges from one of the smuggling bins, determined to prove that he isn't self serving, only to hear an Imperial Patrol about to board and search the vessel.
Aboard the Tarkin, C-3PO is attempting to convince Stormtroopers guarding the Tractor Beam systems to allow R2-D2 to perform maintenance, but without orders the Stormtroopers refuse to let them touch a brand new system, so Chewbacca ambushes them, destroying the Tractor Beam.
Leia is trying to secure escape pods as a method of escaping the station, only to discover a large Stormtrooper ambush awaiting them, and she is forced into a fighting retreat, aware that their planned method of leaving the station isn't usable, and wishing Luke is having more luck.
Luke arrives at the main reactor, wondering why he hasn't met any resistance, only to encounter Darth Vader awaiting him, however before either can speak a word, the Imperial Officer Conspiracy strikes, opening the airlock and evacuating all of the atmosphere into space. Luke dodges into an open freight lift, escaping from the trap, but Vader is dragged out through the airlock, only catching the edge by his fingertips, regaining his footing, he begins walking forwards through the screaming air, and closes the Airlock behind him. Pausing only to address the officer who is watching over security cameras, telling him that he will deal with him later, Vader heads back to the command center.
Leia has become lost in the massive station, checking her datapad she discovers she is actually within the mechanism of the Superlaser itself, the same kind of device which destroyed her homeworld.
The Heroes attempt to meet up once again, assembling near the docking bays after R2-D2 accesses the fire systems to seal off fire doors and hinder Stormtrooper operations with fire retardant foam. Luke admits he's failed in his mission, and has even managed to lose his proton charges, but Leia tells him not to worry about that, but to worry about how they're going to manage to steal a ship which is heavily guarded by Stormtroopers.
Meanwhile on the planet, Lando bluffs the Stormtrooper patrol, who think they recognise the Millenium Falcon as a Rebel ship, but he bribes them by pretending to be a smuggler and giving them his supply of spice which could make them rich, revealing to the reader that it is only yeast from the Falcons supplies.
In the hangar on the Tarkin, Luke throws a device into the hangar, shouting that it is a detonator, and Stormtroopers scramble out of the way, and the Heroes charge onto a transport to steal it, with Luke revealing that the Explosives are just commlinks taped together.
As they launch from the station, they are pursued by Tie Fighters and Darth Vader himself, and they attempt to use the cluttered construction yards to avoid being shot. Lando arrives in the Falcon, destroying enough Tie Fighters to allow the two ships to dock and everyone to board the Falcon, however manages to some heavy hits on the ship.
Aboard the Tarkin, the conspirators decide to fire the Superlaser on the fleeing ship, hoping that the blast will also kill Vader, but as they fire there is a overload and the Tarkin explodes, crippling Vader ship and allowing the heroes to escape, where Leia reveals that she sabotaged the system to feedback into the station, basically making the Tarkin shoot itself, and she thanks Lando for helping them out.

High Points : There are some great scenes in this issue, especially the subversion of the fight between Vader and Luke, which doesn't happen because the conspirators against Vader spring their trap. It's a well constructed and wonderfully written moment, which takes everything you expect from a Star Wars story where Luke and Vader are going to encounter each other, then throws it out as they both must struggle for their lives.


Low Points : But the problem with this issue is there's too much going on, jumping between 4 groups of heroes just makes the story too busy and confusing, the removal of the Lando and Chewbacca stories and concentrating on just Luke and Leia would have made a lot more sense, and the loss of these storyline's wouldn't have made that much difference really with only really R2-D2 making any significant contribution to the plot which would require any rethinking (all Lando really does is turn up to allow them to swap ships. What was really wrong with the one they'd stolen?)

While Luke's bluff with the commlinks works, as in the moment you could see why Stormtroopers would leap out of the potential blast area allowing the heroes to slip through, Lando's bluff, bribing the Stormtroopers with "Spice" which is actually yeast from the Falcon's supplies, doesn't really work for me. I found it difficult to accept that Stormtroopers would be so easy to bribe. And to tell the truth, made me wonder why the Falcon carries Yeast? Does Han operate a brewery out of the ship? Or maybe Chewbacca bakes Scones in his off time?

So what do you really think ? : As I suspected last issue, the story isn't given time to develop and everything happens in a rush. The Officer Conspiracy to kill Vader isn't really given time to grow, and I suspect will never be seen again since they all were killed aboard the Tarkin. Although I did love the "little used maintenance area" where the conspirators met up, where someone has dumped a bunch of sofa's and armchairs, no reason when you're planning the murder of a superior that you shouldn't be comfortable. Made me wonder if this conspiracy started because someone set up this area as somewhere to sneak off to when they needed a break from Vader, and the bitching about their boss turned into plans to kill him.

{Officer bursts into room finding others sipping coffee}
"You look stressed Mike, what's he done this time?"
"He's only gone and murdered Steve, mind controlled him and made him march out of an airlock!" {panting}
"Oh no, not Steve, his wife's expecting their second kid next week, that's awful."
"You know, somebody should really do something about that Sith Lord!" {strokes chin in thought} "Hey, that somebody could be us!"
{and so the conspiracy is born} . . . .

Final Words : Well, the Tarkin is destroyed, before even leaving the construction yards, at this pace, Rebels will be destroying Imperial Superweapons when they're not even out of the planning stage. Some future issue will be about a brave Rebel spy spilling coffee on the plans for the Nova Destructor or some such.
It takes away the danger of these weapons, and while I liked the concept of the Tarkin, if it had been a building presence across multiple issues, if an attack had failed, and it was defeated at the last second to add some tension to the story. But all of that is ignored here, the only danger the Tarkin projects is onto the heroes themselves, so doesn't emanate any threat beyond an ordinary Star Destroyer really.
Some good scenes, but overall disappointing.