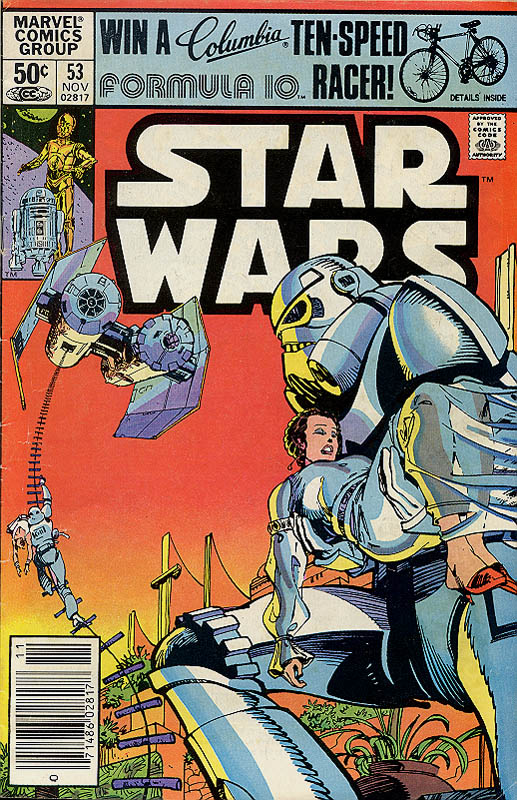 What is it ? : Princess Leia is aboard a Rebel vessel investigating Imperial activity towards the edge of known space, she is thinking about her homeworld, Alderaan, and drifts off into a nightmare, remembering the events leading up to its destruction, and she wonders whether her father was awake and aware of the attack before it came, as it was the middle of the night at the Royal Palace.
A crew member awakens her from the nightmare, and she boards a shuttle to investigate Shiva IV which they know to be inhabited, but before the shuttle can launch there are massive explosions aboard both vessels as they run into an Imperial Anti-Matter minefield.
Leia launches the shuttle, as it is on fire and endangering the Rebel ship, prepared to sacrifice her life for those aboard the larger vessel, and plummets into the atmosphere of Shiva IV.
The story then picks up some days later, with some muscled men, who dress like a He-Man cosplay society, hear fighting. The men are Prince Aron and Keral Longknife, friends and blood brothers who have brought peace to this world, and appear to be roasting chicken in the wilderness at the time.
They investigate and discover Leia under attack by a group of Lizard like aliens who the describe as outcasts. In the darkness there's some chaos, as neither side can really determine how many they are opposing, but it ends with Leia being rescued and the outcasts fleeing.
Aron, tries to speak to Leia, but the two do not speak the same language, and Leia determines that it will take some time for her Translatacomp to learn their language. Leia is also curious about her rescuers, since they dress like extras in a Conan movie and wield simple swords, but take her to a repulsorlift vehicle to take her to their home, she theorizes that there has been some kind of nuclear war which has sent the technology backwards in most ways while leaving hi-tech relics.
As they speed towards their home, they are going to pass by the ruins of a city, and Aron and Keral remark that this destruction has only happened recently, but don't know what has caused it. Leia spots the flicker of cherenkov effect over the crater, and recognises the effects of an Anti-Matter bomb, which will have have left dangerous radiation behind. So she play acts out that they are heading into danger, Aron trusts her enough to change their course, and Keral looks on, thinking that the destroyed city is the demonstration he has been waiting for to grasp power for himself.
Some weeks later, Prince Aron is reading reports on the destroyed city, and no one can determine what has happened or who did it, his wife enters and after a little fooling around which leaves the prince covered only with a towel, she comments that he has been avoiding Leia. She tells him that Leia has told her about who has caused the destruction, a mighty and malevolent galactic Empire, and that he should at least listen to Leia who is waiting outside (all the time they were fooling around and getting naked?).
He sees Leia, who has changed into a gown, and he remarks she is a princess born, his wife noting how ill at ease he is. But they don't have time to deal with any thing now, as their guests are arriving for their gala to celebrate the anniversary of the signing of the peace treaty.
Prince Aron and his wife, Alisande, look on as Leia dances with Prince Ygal Delois captain of the guard, and Alisande comments that Aron looks at Leia as once he would have looked at her, telling him that there is no crime in being tempted, it just shows he is human, but he should ensure he make a wise decision, as she too has come to care for Leia as a friend, almost as a daughter, and would no want to see her hurt, especially by him.
Leia kisses Ygal, and then flees the room, startled by her own actions, and Aron follows, warning Ygal off with a glance.
Outside, Leia confesses to Aron, that she was started and fled because she was enjoying herself and then remembered similar events at Alderaan, and that all those people are now dead, so how dare she forget them for even a moment to have fun. Aron confesses that he and Alisande once had a daughter they lost, and he wished it was him that died, but his responsibility was to the living.
The two are attacked and knocked into unconsciousness by "enormous" Stormtroopers, who carry their bodies up to a Tie Shuttle hovering overhead.
The guards notice that Leia and Aron are missing and go to inform Alisande, and at some point later, Aron awakes as a prisoner of the Empire, commanded by a large alien called Skar.

High Points : Wow, it's so completely different from what we've seen before, a total tonal shift from Star Wars, and it doesn't feel right at all.
That said, there are a number of excellent elements in this story, Leia handles herself pretty well, recognising and coming up with theories to determine why there's the weird mix of low and high tech, and warning her new comrades that there's a radiation hazard around the ruins of the city.
We've got the hint of betrayal from Keral, who supposedly is a lifelong friend of Aron's, but now covets Aron's power, hopefully we'll get that fleshed out a little more.
Most of all, for all of the change of tone, Shiva IV really does feel like an alien world, there's a variety of different environments we get to see, and the culture and history is completely different, so it really feels as if we're seeing somewhere different, and not just an Earth environment being called a different world (swamp worlds, ice worlds, sea worlds, etc, etc).

Low Points : I can't really pick too many holes in the story, but we're really off script here and into a different sci-fi universe. Even details like translation are handled differently, with Leia using a handheld device like a universal translator out of Star Trek, rather than requiring a droid like C-3PO to perform the task, which is an established Star Wars way of doing that task. Basically now, 3PO is out of a job, replaced by a piece of tech you can slip into a pocket.
One of the prime things the Star Wars RPG urges you to do when writing Star Wars adventures is to make them grand in scale, you don't have a temple filled with monks, you have a temple on the top of a mile high waterfall filled with Gamorrean Monks. And this story seems to break that rule by filling it with ordinary things. The heroes wield swords, instead of wielding energy swords, the castle that Aron lives in is just a castle, not a floating castle in the clouds, or floating in a purple ocean. It's just ordinary Sci-Fi, not overblown Space Opera the way Star Wars should be.

So what do you really think ? : So, I've established that this issue is different from normal Star Wars in some good, and bad ways. But there's a reason for that, you see, Marvel were negotiating to get the licence for John Carter of Mars comics, but the deal fell through, but only after some artwork had been created. Marvel being Marvel didn't want to waste that artwork, so reworked it into a Star Wars story, adding Leia, but surrounding her with the Conan like heroes and world of John Carter.
The most obvious sign of this is the end of the issue, where Leia and Aron are kidnapped by "enormous" Stormtroopers. It is obvious to me that the two troopers kidnapping them were previously Barbarians climbing down from one of the John Carter hovercraft. But the artists drew Stormtrooper armour over the figures, and a Tie Boarding Craft over the hovercraft, which is why the Stormtroopers are so overly large, to cover the original muscled figures.

Final Words : A very interesting tale, but it really feels like the 1930's - 1960's sci-fi tales that Burroughs told, all sandals and swords, bare chested barbarian heroes, and scantily dressed ladies. It's kind of fun, but I've marked it down for how little it feels like Star Wars, with it feeling as if Leia has actually landed in a different fictional universe.

Oh, and I almost forgot, what's with the title? Is Leia the last gift from Alderaan? Is she a gift to Aron?
The name confuses me, and if it is Leia that's the gift, then that's problematic from a using women as property point of view. If she'd given Aron some perfect piece of advice from her father, then that could have been the gift, but we're not told of a gift, and the only way Alderaan is mentioned in the story is Leia's guilty feelings. So is Leia's survivor's guilt the Last Gift from Alderaan? If so, it's a pretty lousy gift.