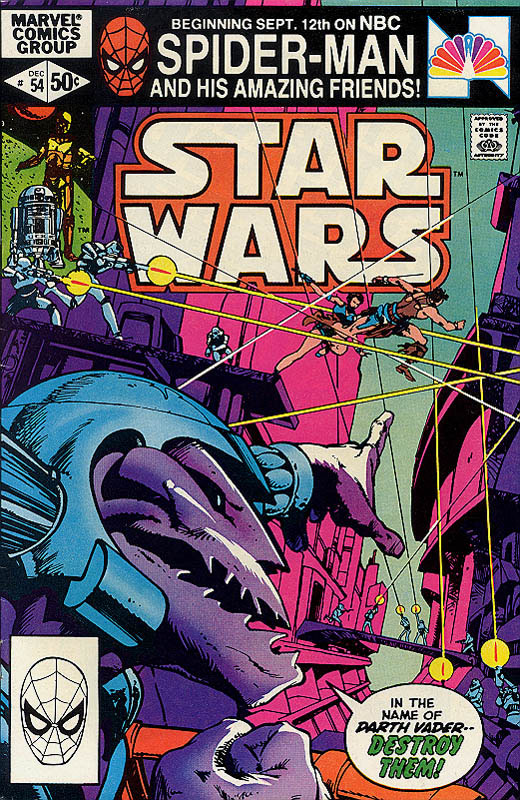 What is it ? : Leia and Prince Aron have been kidnapped and awake to discover that they are prisoners of the Empire, an alien, Sk'ar reveals that the Empire plans to use another Anti-Matter bomb against the Capital, and then place Prince Ygal Delois on the throne. Sending the two off to jail as they depart to perform the deed.
Aron goes bezerk and breaks his chains allowing them to escape and steal a flyer, catching up with the flyer with the Anti-Matter bomb on it, and boarding the vessel to attempt to defuse it.
They are vastly outnumbered, but are joined by Luke Skywalker, Chewbacca, Lando Calrissian and Keral Longknife, but discover that Sk'ar has a personal force field and shots just bounce off him. Leia defuses the bomb, and Sk'ar leaps aboard a flyer to flee, only for Chewbacca to hurl a piece of metal at it destroying the flyer and killing Sk'ar.
Everyone heads the palace to celebrate, when R2-D2 interrupts to inform them a Star Destroyer has arrived in orbit, the heroes board the Millenium Falcon and skirmish with it, detecting a nearby Black Hole, using the Falcons superior maneuverability, the lure the Star Destroyer into moving too close to the black hole, where it is torn apart and destroyed.

High Points : The strange feeling of other worldness continues in this issue, especially as it is mainly told in the past tense by Prince Aron, as if he is retelling the story to someone.
The Buck Rogers, Flash Gordon, 50's Pulp Sci-fi theme continues through with the design work in this issue, with all of the men of Shiva IV dressed like Conan, and even Leia getting into the bikini vibe as her clothes are ripped and she runs around in nearly nothing. But the Flyer designs are stunning pieces of retro futurism, and the settings are spectacular.

Low Points : There's not much storyline here to get excited by, as everything just gets wrapped up neatly by the end of the issue, as all the concepts and plots started last issue just get tidied away. Even Prince Arons weird crush on Leia ends suddenly, as in just single frame he comes to his senses.
I also find the Empire's reasoning for attempting this coup on Shiva IV, rather than just expanding the Empire, which would be reason enough, the Issue informs us that the men of Shiva IV are the most formidable warriors in the galaxy, and the Empire wants to recruit them as Stormtroopers. Which is a plotline which is told to us and not shown, as the Warriors of Shiva IV appear to be no better than anyone else, just slightly larger.

So what do you really think ? : I wasn't hugely impressed by this one, the tone continues to feel from a different genre of Sci-Fi, although that genre (50's pulp) is done well, it just doesn't feel very Star Wars, with Leia, Luke and the rest feeling like they've just been transplanted into another universe (Mark Hamill turned up as Luke on the Muppets once, imagine trying to treat that appearance as canon).

Final Words : This cost cutting move from Marvel, reusing art assets from the unpublished John Carter of Mars comic book, is interesting but doesn't really fit properly with John Carter and Star Wars just being so tonally different that it's obvious where Star Wars is crowbarred into the story to make it fit (the Imperial Officers pasted into the background during the initial dungeon torture scenes for example).
An interesting, but fundamentally flawed story, which is just tidied away too neatly by the end of the issue, to be forgotten.