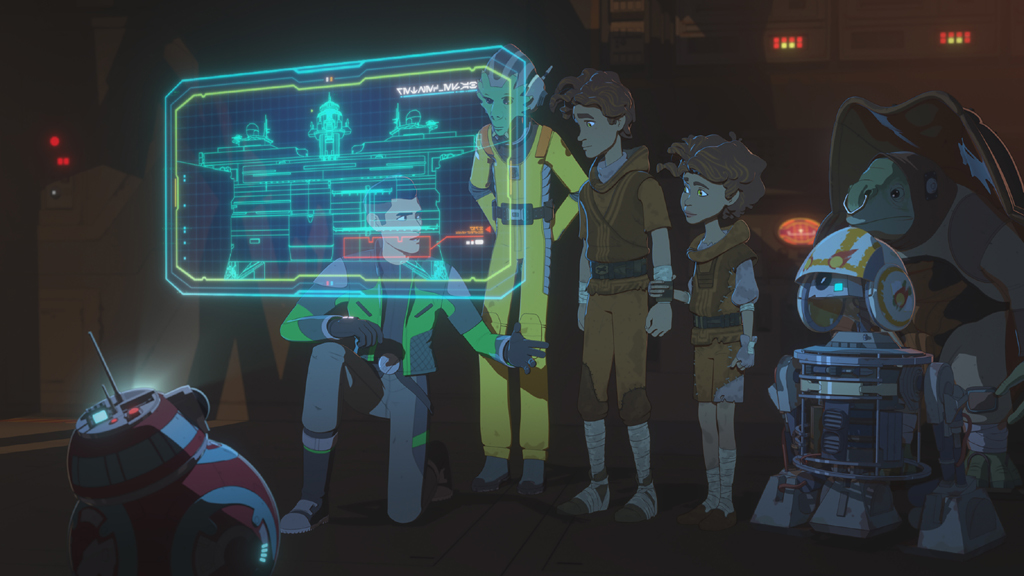 What is it ? : Colossus Station remains sunken into the ocean of Castilon with only the command tower remaining above the surface, Commander Pyre announces over the PA system that people are to remain in their quarters until the emergency passes.
Commander Doza storms into his own office which Pyre has commandeered, and demands to know why they've arrested Yeager, only to be accused of insubordination.
Doza commands his droid into action and it opens fire, taking out a number of the Stormtroopers in the room before Pyre disables it, then points his gun at Doza's head who is dragged off to incarceration and thrown into a cell with Yeager.
Meanwhile, Kaz is planning his next action using a holographic image of the station, with Bucket, CB-23, Kel, Eila, Neeku along with some Chelidae watching. Kaz plans to contact his father, a Senator in the New Republic, to bring help back to the station, however Neeku scoffs at his delusions of grandeur.
Tam is enjoying a meal with Agent Tierny, and denies knowing anything about Yeager and Kaz's actions, saying that Yeager wasn't a spy. Tierny shows her a recording of Yeager under interrogation, saying that it was he that recruited Kaz, and he that flew the Fireball on missions against the First Order. Tam says that it's just Yeager trying to protect Kaz as he always does, but is obviously moved by the testimony.
Kaz and Neeku take over a control room, luring the Stormtroopers who were guarding it outside with the Chelidae, and Kaz swims out of the submerged station, skirmishing with some aquatic Stormtroopers, and defeating them by retreating into a higher level in the station and then flooding the tunnels to eject the Stormtroopers back into the ocean.
He visits Flix and Orka, who are attempting to smuggle themselves out of the station inside a packing container, and Torra's pet, Buggles, which begins leading him to her.
Yeager is being escorted through the station when they encounter Tam, who tells him the First Order have told her everything, and asks how he could have lied to her before he is dragged away.
Neeku is monitoring Kaz's progress from the control room, when Eila points out a massive device over their heads, which Neeku recognises as a Class 2 Hyperdrive, he informs Kaz, who is astounded to learn that the Colossus is a ship, and asks Neeku if he can get the station into the air, which Neeku tells him is his speciality, but after Kaz ends the communication link, he admits the problem is keeping them there.
Kaz meets up with Torra and they begin sneaking into the command tower, encountering and defeating a Stormtrooper, they then hear other Stormtroopers discussing a live broadcast they've been ordered to watch, which involves Starkiller base.
Agent Tierny offers Tam a chance to fulfill her dreams and become a pilot by joining the First Order.
Kaz and Torra sneak into the room where the broadcast is being received, and watch it from the edge of the room by hiding behind some packing containers,. They watch General Hux's speech from The Force Awakens, and Kaz watches in horror as Starkiller base is activated and Hosnian Prime is destroyed, killing all his Friends and Family. . .

High Points : Well, we knew this day was coming, although I'm a little annoyed that the official Star Wars Youtube channel talked about it before I got a chance to see the episode, so it was spoiled for me that it was happening this episode.

And it really was an episode of redemption in many ways for Kaz's character, where Torra is "almost" impressed by the way he takes out a Stormtrooper, Kaz continues to take command and make plans, organising the meagre resistance on Colossus Station, and although it's a bit of a struggle, he takes out two Aquatic Stormtroopers in a frantic and desperate fight, and perhaps for the first time I can remember, Kaz actually shoots a Stormtrooper (if only on stun).

I was also very impressed by Kaz using swimming to get around the station, rather than sneak through air ducts and skulk his way down patrolled corridors, he uses the submerged nature of Colossus station to swim around the outside, entering the station on the levels he is trying to reach. Unfortunately the First Order is already onto this, since he used it to escape them last episode.

Low Points : I'm finding the Ace's suspiciously missing, they've been treated as the superstar pilots and defenders of Colossus station, but since the First Order took over, they've barely been mentioned.
Personally I've been really wondering what's been happening with Griff Halloran, the Black Ace, as apparently he's an ex Imperial Tie Fighter Pilot, and I'd love to have seen at least something of how they're treating him. Are they attempting to recruit him? Treating him as a Traitor for not joining the First Order? It really seems as if there's some missed story possibilities with that character (heck, back when Kaz was trying to identify any potential First Order infiltrators on the station, why wasn't Griff even mentioned as a possibility?)
While the story reasons for the First Order trying to recruit Tam seem fairly obvious (she can either turn on them at the last minute to help her "friends", or if the story is going where I've been praying it would for weeks, she will be recruited into the First Order and become the lead villain in future seasons of Resistance (especially as Captain Phasma will be otherwise occupied from now on).
But I'm stretching to find an in universe reason why an Agent of the First Order Intelligence Bureau is spending so much time attempting to recruit a technician from a backwater station? Even going so far to offer a chance to become a pilot, when she's not witnessed Tam fly at all, never mind display any talent.
But I shouldn't complain, as the story does really seem to be going exactly where I'd hoped.

So what do you really think ? : This was another pretty good episode, setting up all the pieces for the season finale, which seems set to involve launching the Colossus and perhaps even Hyperspacing it across the galaxy. I've seen speculation for many weeks that this in fact was Colossus Stations purpose, as a Starship rather than a refuelling station, but I totally missed any pointers towards this, and have to wonder about it (for example, the station is seen leaking water from it's submersion, which doesn't bode well for it if put into a Vacuum. And wouldn't all the opening's to the surface we've seen (especially the hangars) have shields if this is a starship, because otherwise they'd vent atmosphere in space?
But maybe I've just missed the clues, as others definitely caught onto something and spotted it.

Final Words : Well, one episode to go, and I'm definitely engaged with the series now and really do want to see how everything works out.
Resistance really has turned things around.