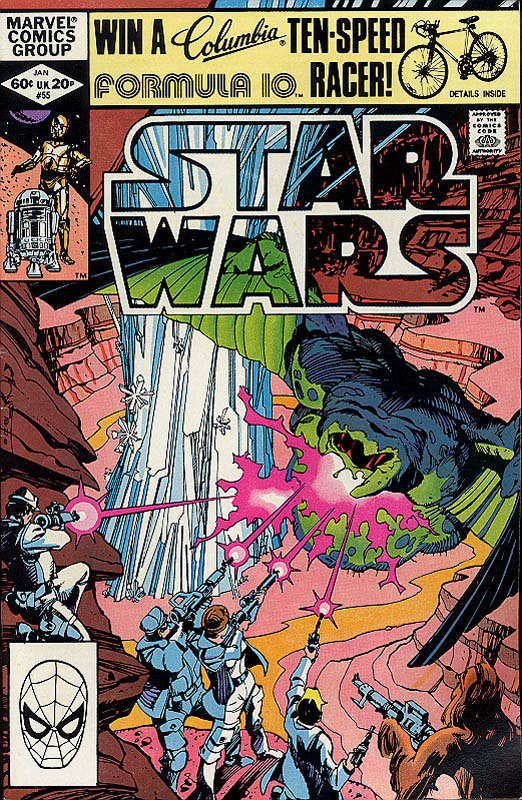 What is it ? : The Rebel Fleet has located a world they feel will make a good replacement base for them, Princess Leia and Chewbacca head down to the surface with a team to scout it out, with Luke, Lando and the Fleet to head out of the system to return when summoned in 3 days. If they are not summoned, they are to assume that the planet, Arbra is too hostile, and to not return and risk the fleet.
The world appears perfect, with thick forest cover which would disguise all Rebel activity on the planet, and the most prevalent type of creature, being those known as Hoojib, small rodents which are common, but seem harmless.
Lando and Luke talk, and Lando tells Luke he feels responsible for Cloud City falling under Imperial control, so he's heading back to see if he can help, taking the Millenium Falcon and leaving.
The Rebels on the surface set up camp, but when they awake they discover that all of their equipment is powerless, te Hoojib's are power feeders, and only the two guards patrolling away from the camp still have any energy in their blasters.
The Hoojibs then reveal they are intelligent and telepathic, speaking through a spokesbeing called Plif, and are used to a peaceful life on Arbra, which has a nearby cave of energised Crystals, which the Hoojibs normally live in and feed from.
However a creature arrived on the world from Space, which has forced them from their home, and the Rebel power cells were too tempting to the hungry Hoojibs.
The creature, a Slivilith then attacks the Rebel camp, grabbing a Rebel trooper before leaving. So the Rebels prepare primitive weapons such as spears, as they don't want to risk the precious energy in the remaining two blasters, which they need it to power the radio to recall the fleet in 3 days or be stranded on the planet forever. With spears in hand they prepare to assault the Hoojib cave to slay the Slivilith, but the Hoojibs volunteer to lure the creature from it's sanctuary in the cave.
The Rebels attack with their spears, and have little effect on the large creature, but Leia lures it back into the caves, stunning it with one of the remaining blasters, causing it to fall onto the sharp crystals which kill it.
One of the Rebels suggests the cave, with its abundant energy will be perfect for a Rebel base and they should force the Hoojibs to leave, but Leia doesn't consider that an option, as the Rebellion is fighting against forcing people from their homes.
The Hoojibs are grateful, and offer to share the caves with the Rebels.
Meanwhile, Lando arrives at Cloud City, but is alarmed that no patrols have intercepted him and it seems quiet and abandoned.

High Points : There's a couple of interesting ideas in here, but to tell the truth it seems a little contrived, for example, they've never left instructions for them not to be rescued unless they radio that it's safe before, so it's completely contrived that their loss of power will strand them here forever.
And the Hoojibs are very reminiscent to me of another Marvel comic of the period, a Doctor Who one, where the cute and cuddly "Beep the Meep" turns out to be a gun wielding intergalactic terrorist.
I was also kind of impressed that they mention the recent issues, and that the Rebel forces are stretched after the events on the Tarkin and Shiva IV, which did add some continuity I was grateful for.

Low Points : For the reasons I give above, I'm not a massive fan of this story, it seems just too derivative of other stories of the time, and it suffers from being far too contrived.
But it's not a terrible issue at all, the story nips by, the setting is pretty interesting, and there's some set up for a solo Lando adventure next issue.

So what do you really think ? : An entertaining enough story, and I find it odd that the Hoojibs were considered worthy of being included in the greater expanded universe, but my personal favourite Jaxxon was not. They seem to suffer from many of the same problems as him, in not fitting into the Star Wars universe particularly well, and just being cute for the sake of it.

Final Words : Well, next issue a return to Cloud City by Lando, seemingly without the other heroes, although they'll probably turn up to save the day.