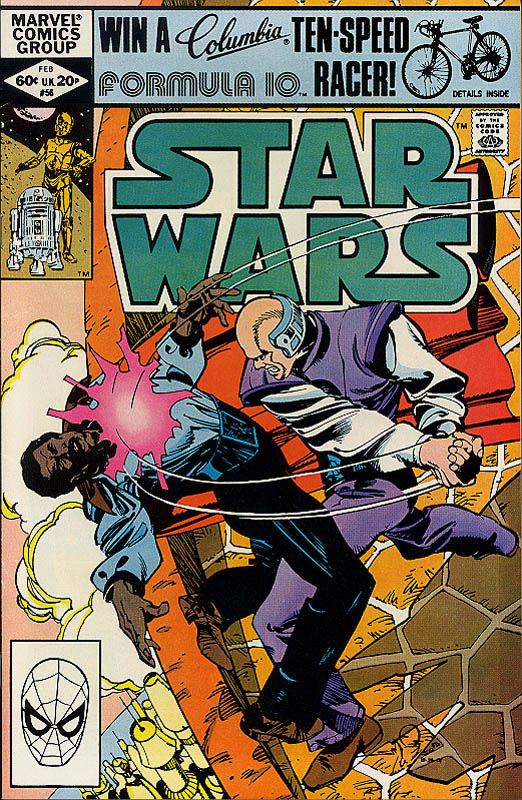 What is it ? : Lando arrives back at Cloud City, finding it empty and deserted, he wonders if the Empire has managed to automate the entire process, finding a terminal and his administrative codes still working, he discovers that the entire population evacuated due to some kind of emergency to the surface of Bespin.
While he ponders this for a moment, he sees Lobot and greets him as a friend, but Lobot attacks him with his fists, his augmentation sparking and in broken speech talking about "Intruder", "Danger to the city", "Must Destroy!", and after physically hurling Lando around, Lando flees.
An Imperial Vessel lands at Cloud City and is met by an Imperial Officer, who instructs the disembarking Bomb Squad that Ugnaughts have planted bombs on the station. Lando spots this, and fires on the group, assuming they are the Intruders and the Danger to the City that Lobot was talking about, luring a group of the Stormtrooper guards to chase him into the Carbon Freezing Chamber.
Meanwhile on Arbra, the Rebels are settling into their new base in the Hoojib cave, using camouflaged Sky Speeders to patrol the nearby forest. Leia spots Luke preparing to leave in his X-Wing along with another Pilot, a woman named Shira, speaking she discovers that Luke is going to go to Bespin as he is worried about Lando. When Shira says she's going along to look after Luke, Leia becomes slightly jealous but says nothing, watching them leave.
The Imperial Bomb Squad discover one of the Ugnaught bombs, which is constructed from various pieces of junk they found laying around. The bomb speaks to them, explaining that it has some old droid parts in it, and will help them defuse it as it doesn't really want to die, starting to talk them through the defusing process.
Lando waits in the Carbon Freezing Chamber until the Stormtroopers are next to the entrance to where Han was frozen, and swings down kicking them into the Freezing device itself, activating it and freezing them.
The Bomb Squad continue to follow the bombs instructions, only to hear it activate and call them suckers before exploding and rocking the entire station which tilts as it takes massive damage.
Lobot detects the use of the Carbon Freezing Chamber and arrives, once more attacking Lando while blurting out warnings about danger, and threats to kill. Lando evades him, heading to the site of he explosion, and ends up in a Mexican standoff with the Imperial officer, and they decide to work together for mutual survival. The officer explains that the Ugnaughts planted 12 bombs on the station and forced the inhabitants to evacuate to the surface after the Empire took charge.
Lando comes up with a plan, and they lure Lobot into a loading dock, where the Imperial officer uses a massive mechanical loading arm to hold Lobot, while Lando disables his cybernetic augmentations.
With Lobot disabled, Lando explains that the Ugnaughts must have realised that Lobot was one of the few who could disabled their bombs, using his cybernetic implants to interface with the bombs and shut them down, and Lando begins reversing the damage done to his friend, who soon recovers.
The proceed to deactivate all of the bombs with Lobot, and Lando tells the Imperial officer that perhaps if the Empire treated the Ugnaughts with more respect, this wouldn't have happened, but the officer tells his the truce is over, and proceeds to push Lando off a nearby ledge, leaving him plummeting from Cloud City.

High Points : This one really communicates the physical action going on particularly well, with Lando rushing around the station, pursued by his malfunctioning friend and Imperial forces, as the clock ticks down towards the destruction of the station.
While the obvious betrayal by the Imperial Officer was obvious, the fact that Lando and this officer were forced to work together felt fresh and was something we've not really seen before in the comics.
And Cloud City is particularly well used, with not only locations we saw in The Empire Strikes Back being used, but also the fact that this is a massive floating platform, so as the bombs detonate, the station lurches around and at one point starts to tilt, as it struggles to remain in the air.

Low Points : There's a bit of a problem in this story, and it's how they use Lobots cybernetics. In the summary above, I make it sound like Lobot interfaces with the bombs to defuse them, which sounds pretty reasonable, and even kind of Star Warsy, as it seems like the kind of thing R2-D2 could do.
But in the comic itself, it is shown as more of a force power. Lobot stands near the bombs, and projects energy "to manipulate certain objects without touching them", a form of telekinesis apparently. This has never been shown before or since in any Star Wars media I've seen, and according to Lando is an ability all Cyborgs have (so Vader and Luke as well I guess).
So, instead of connecting by Wi-fi to the bombs, and hacking their control systems to shut them down. He projects "tendrils of cybernetic force, probing past deadly triggers", which definitely sounds more Jedi to me.

So what do you really think ? : Now, without doing any research, it's definitely the first time I've heard of the surface of Bespin! I've always thought it was a Gas Giant, with Cloud City floating among the gas clouds.
But according to this comic, Bespin is the homeworld of the Ugnaughts, and has a terrestrial surface. Cloud City floats above, mining Anti-Gravity gas from the clouds (which only makes sense it would be easier to get up there), rather than the Tibanna gas (used for blasters) that it's more commonly known for.
But to tell the truth, I can't actually remember a source for thinking it's a Gas Giant, and the whole set up here does make some kind of sense (it's always bothered me, that what I was thinking of as a Gas Giant, had a breathable atmosphere). . . .

Okay, I've gone and looked it up, and Bespin is officially a Gas Giant, so my memories were correct, but for reasons given above, I actually prefer this version in some ways.

Final Words : Yeah, this was a good issue, a strong action based plot, with plenty going on, and Lando really getting to take front stage, which was really welcome.