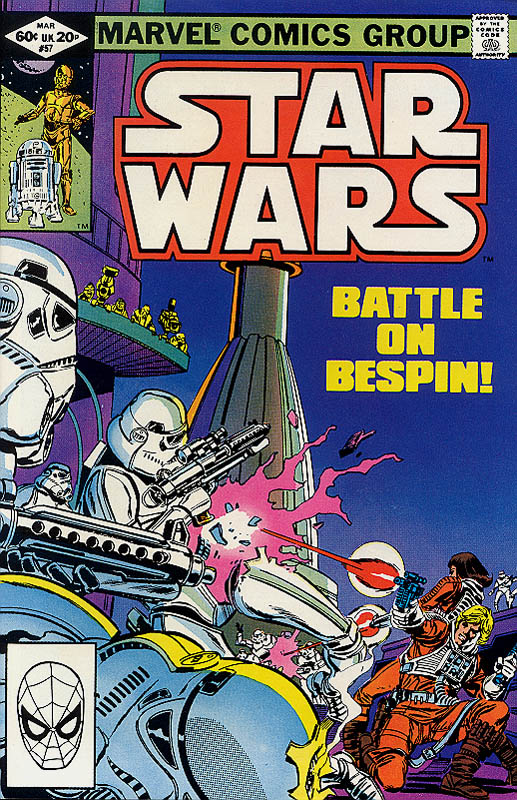 What is it ? : So Lando is plummeting from Cloud City towards the surface of Bespin after being pushed off by Imperial Captain Hugo Treece. Lobot calculates that Treece is a danger to Cloud City and that Lando is the citizen most capable of dealing with him, so grabs an emergency jet pack and leaps off to rescue Lando, grabbing him just in time as he almost hits the surface.
On the surface of Bespin, an Ugnaught camera team are arriving below to record the destruction of Cloud City as part of the heroic struggle against human oppression. Their vehicle is carried below gas bags, one of which is hit by fragments of the railing that Treece pushed Lando through, which punctures it, temporarily disabling them.
They're not happy to see Lando,and Lobot warns him that the Ugnaughts are the ones responsible for his reprogramming and the sabotage of Cloud City, but as they come under attack from an Imperial Patrol, the Ugnaughts warm enough to Lando, that afterwards they agree to take him to their King so he can be officially executed.
At the Ugnaught Capital city, the King tells Lando of the oppression they received under the Empire, with the new administrator, Treece, stealing profits, so working the populace harder to make up for the shortfall.
The King recognises that Lando was fair to the Ugnaughts, and that working on Cloud City was actually an improvement in life quality for his people, as they worked shorter hours in better conditions for higher pay, so the two agree to work together to recapture the city.
Meanwhile, Luke and Shira have arrived on Cloud City, and after R2-D2 accesses the computers revealing the existence of the bombs, they come under fire from Treece, who calls for backup which arrives in the form of a squad of Stormtroopers in a Troop Shuttle.
With the battle occupying their attention, they fail to notice Lando and the Ugnaughts arriving, and the battle sudden becomes more intense as the Stormtroopers are caught between two groups of enemies.
Lando tells Treece that unless they withdraw, he'll get Lobot to reactivate the bombs, but Treece shoots Lobot to end that option.
However, Luke reaches out through the force and reactivates the bombs, and the station is shaken as they detonate and the city begins dropping towards the surface of Bespin.
Treece and the Stormtroopers flee in their shuttle, and Lando and the Ugnaught king prepare their own evacuation, but Luke tells them there's no point. He only detonated the ignition systems in each bomb, and the city's self repair systems are already dealing with the damage and restoring normal flight.
Lobot and the Ugnaughts are concerned that Treece will return, but Lando informs them that he is unlikely to cause them problems, as he will have enough of his own, as Lando has transferred all of his stolen money into Vader's account who will surely investigate where it has come from, and the Empire may believe the station is destroyed, so might not come back.

High Points : Much of this story is fairly standard, and is a decent Star Wars romp, with one of the heroes recruiting locals against the Empire, so far so standard. And I know it's not official, because as mentioned in my review of the last issue, officially Bespin is a Gas Giant.
However, I find this version of Bespin actually far more interesting. A version where gas required for anti-gravity flight is mined. The home of the Ugnaughts, who use the gas for all of their vehicles which are steampunkish blimps and zeppelins. Where Cloud City naturally manages to more easily mine the gases, which obviously rise through the atmosphere.
I love the mention by the Ugnaught king that the Empire's activities were depleting the gas faster than the ecosystem can safely produce, an early mention of the strip mining and depletion of resources the Empire caused in feeding it's desire for more weapons of war.
I even adore the Ugnaught camera team, dispatched to report on the destruction of Cloud City, to inform the planets population of the success of their heroic struggle against the Empire. It's great how it's not a military patrol Lando encounters, but someone with a fairly legitimate reason for being below Cloud City at the time. I love how they keep tagging along with the action as well, being still with Lando and the King as they retake Cloud City, talking between themselves of winning awards for their reporting as they get footage of the battle.

Low Points : Although, I must ask what did the Ugnaught camera team expect? If the falling rail destroys their gas bag, temporarily disabling their vehicle, what the heck did they expect the entirety of Cloud City to do? Standing directly beneath the massive city when they expect it to explode and drop from the sky, doesn't seem the wisest decision.

And not sure if this should be a criticism at all, but definitely worth mentioning, but I can't work out if the Ugnaughts are supposed to be Scottish or Irish. Their use of phrases such as "A word of advice Laddie", "Greetins, Lando, I hope yer have a good explanation fir me.", as well as many "yer"s spread throughout, it reads to me as someone attempting to write Scottish, but it's so cliched that I can easily put on an Irish accent and read it as well. But as a Scotsman, I'm not sure whether I should be insulted or complimented by the writers using my accent for the Ugnaughts.

Finally, Luke uses the force to reach out and reactivate all of the 11 bombs aboard Cloud City, I know he's supposed to be growing in power, but this seems incredibly powerful for him. Stretching out with the force to 11 seperate locations spread around the edge of this massive city feels more like magic than the way the force has been shown before.

So what do you really think ? : I definitely enjoyed this one, although Luke seems a little crowbarred in and overpowered when he does show up, the story focuses mainly on Lando giving him centre stage for once, and this version of Bespin does make a lot of sense, perhaps more than the canon one.

Final Words : This story has been one of the ones where a future development is spoiled in my research for stat'ing out an issue. One of the characters in this issue (and the last) isn't who they say they are, and the mere action of clicking on the link to their Wookieepedia page spoiled this for me. Oh well, those are the breaks I guess.