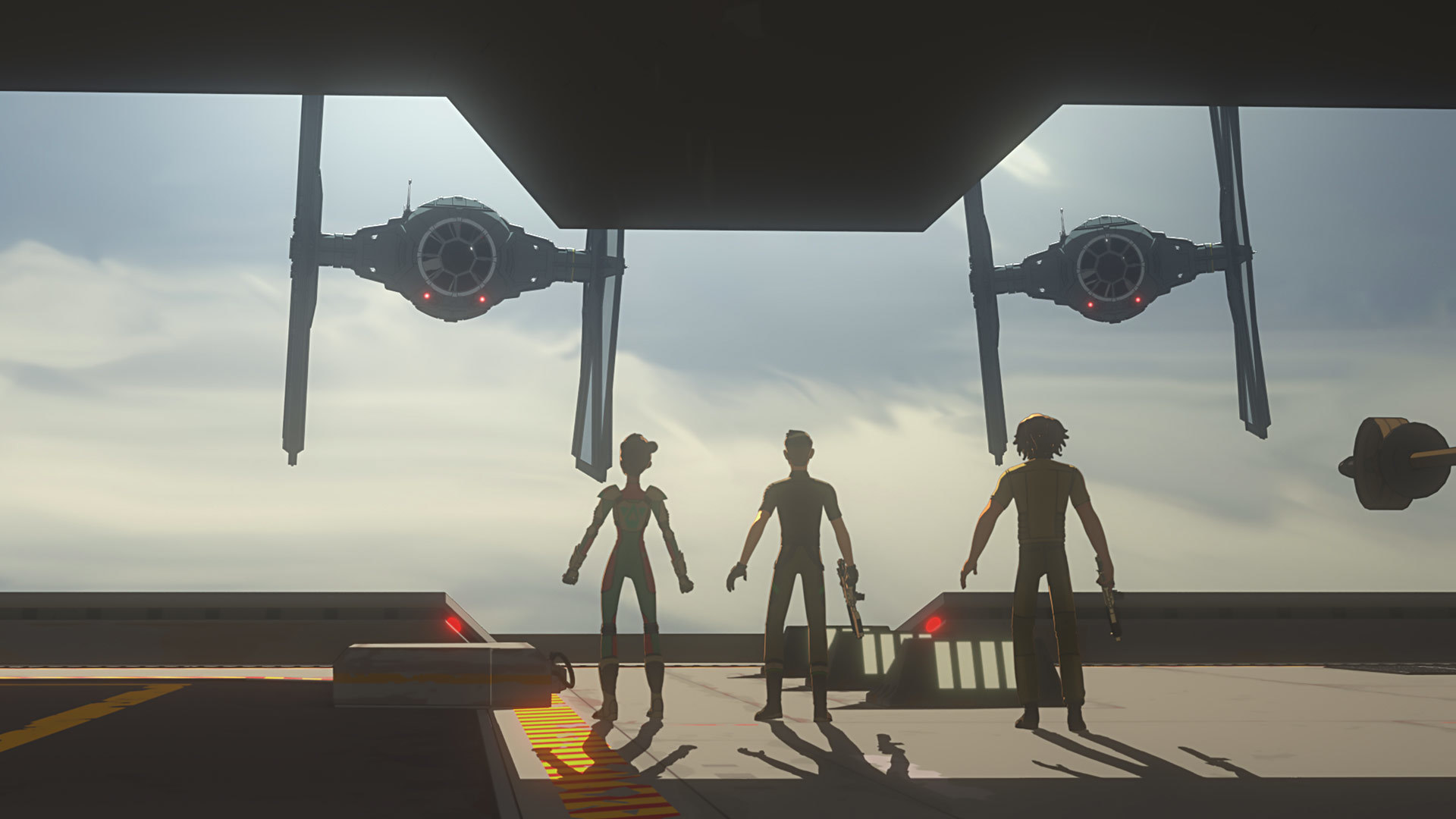 What is it ? : Showing again the final moments of the last episode, Kaz and Torra watch as Starkiller base fires on Kaz's homeworld of Hosnian Prime, killing his family and everyone he knew and crushing the New Republic, Kaz cries out, but Torra drags him from the room before the Stormtroopers watching the broadcast notice.
They head to the prison cells and release Jeager and Commander Doza, stunning the guards and locking them in the cells.
Neeku informs them that to launch the station and use it's hyperdrive as they instructed him to, he must flush all of the flooded sections to lighten the vessel. Kaz and Torra begin herding Stormtroopers into the path of the water to be flushed, by taunting them and getting them into sections where the water is to pass through, which flushes the Stormtroopers out too.
In the command tower, Pyre receives communications that Stormtroopers are being lost, overhearing, Agent Tierney orders the evacuation of the station, and the group leave the commander's office taking Tam with them. Commander Doza and Jeager enter, and Doza begins preparing the Colossus for flight, but Yeager says he must try to rescue Tam, and signals Kaz.
Yeager and Kaz ambush the group as they are boarding a First Order Shuttle, calling on Tam to escape, but she tells them they lied to her, and refuses, boarding the shuttle with Tierney and Pyre as the station shudders as it begins to take off as Tie Fighters begin to swarm down from the sky and attack the slowly moving station.
Doza frees the Aces from their cells, ordering them to their ships to the Colossus's defence, and Torra, Yeager and Kaz rush to their ships, but as they stand nearby they come under attacks from Tie Fighters, which themselves are blown from the sky as a First Order Troop transporter under the control of Hype Fazon and Aunt Z.
All of the Colossus's fighters launch and a battle ensues, with Baron Vonreg joining the battle in his Red Tie Interceptor and outflying the Ace's even after Commander Doza activates the stations anti-fighter defences.
Kaz spots the pirates and is prepared for the end, as the stations forces will surely be overwhelmed by both pirates and First Order forces, but the pirates open fire on the Ties, and he realises that Synara is in charge and has returned.
With the tide of battle turning in the defenders favour, a Resurgent Class Star Destroyer arrives, pummeling the station with fire, and Kaz orders everyone aboard the station and a retreat into Hyperspace.
Neeku asks where they've to go, and Kaz sends him the coordinates for the Resistance base on D'Qar, but Yeager comes under attack from Vonreg, and Kaz flies his fighter through the superstructure of the station itself to everyone's disbelief, ambushing the Baron and blowing his fighter into shrapnel.
Everyone lands on the station, and the Colossus makes the jump to Hyperspace, only to have Neeku arrive and admit that he never had time to program all of the coordinates, so they don't know where they're going. And as the group looks out into Hyperspace, Kaz says that wherever they're going, they're going together.

High Points : Well it's a pretty darn good finale to the season, loads of action, much of it exactly what we've been promised from the first trailers, Ace's vs First Order starfighter battles.
Okay it's a bit obvious in places, I definitely predicted the Star Destroyers arrival long before it turned up, but it ticks all the right boxes for a finale, tying up many of the plots, and springing us off in new direction for the series, what's Tam going to do as part of The First Order, where is the Colossus going to end up, how are their actions going to match up with the movies (they've only a short time to contact D'Qar, before it launches it's attack on Starkiller base and destroys it, then comes under attack by the First Order and they have to flee).

Kaz remains acting like a hero, although I'm still pretty annoyed they don't like him shooting a gun in the series. it's fine for him to blast a pilot out of the sky in his starfighter, but pointing a gun at a Stormtrooper and shooting him, no.

Low Points : I definitely feel as if there's parts of the story they don't like telling us, or the writers are incredibly lazy and don't keep track of things. All season, the Fireball has been stored in Yeagers workshop, Yeagers fighter in a secret storeroom just off the workshop and Torras in the same hangar as the other Ace's. But now in this episode,Torra and Yeagers fighters and the Fireball are all in the same hangar when the three prepare to launch.
Did the First Order impound them all and move them? Is there some kind of internal fighter transport system to move fighters around to where they're needed? We're not told of any reason why these three ships, stored separately for the entire season, are now suddenly sitting next to one another.

A big issue is made about Kaz flying through the superstructure to attack Vonreg and save Yeager, with Yeager exclaiming "that boy sure can fly". But it doesn't really look that tight, with plenty of room for him to fly through, and no real obstructions he needs to avoid. So it doesn't really look anything special, but everyone acts amazed. While I've been the biggest critic of the show not giving Kaz any respect for his actions, him getting respect for something which looks really easy isn't much better, and it seems a lot like a participation award.

Again with something we're not told, all season people have freely walked in and out of the hangars on the Colossus, the bays just being open to the air when the blast doors are opened. Then when the ship launches into Hyperspace at the end of this episode, the heroes stand looking out of the hangars into space, and I couldn't help wonder if the energy from hyperspace should be melting their faces, or whether the escaping atmosphere should be launching them into space.
I'm perfectly aware that Atmosphere shielding exists in Star Wars, and the Colossus being a starship likely has it, but it's never been shown, it's never mentioned (not even a voice in the background "raise the atmospheric shielding"), and there's no telltale flicker of energy or slight star trekky glow to show a field is in place.

So what do you really think ? : I can't help but here Agent Tierney calling Tam "Tamitha" as sarcastic. Her full name sounds such a made up posh name, but that's probably just me.

I thought from the trailers that Resistance was going to be more about Kaz joining the racers and using that as cover against The First Order. That he'd be using fame as a disguise to strike at the First Order, and that he'd be needing to compete in races, slipping away from the limelight to sabotage First Order operations. That the other Aces would be helping out, that maybe the entire squadron would be undercover Resistance Agents.
But sadly, the idea in my head seems to have been far more interesting than what we got, the adventures of the work experience boy in a repair workshop.
The entire premise of putting Kaz onto the Colossus seems to be manufactured, as the First Order's plans don't seem to start until he's there, so I'm not sure why Poe thought it was so important to place Kaz there, as there was nothing really going on for Kaz to spy on, until after Kaz was there. Unless the Resistance was planting agents on every world, watching out for First Order activities before they start.

Final Words : So, a decent episode in a series which got a lot better as it went along. But it's still difficult to forgive how bad Resistance was for the first 2/3rd's of its season.

But, I am intrigued in what comes next, and will watch the next season whenever it gets released with some interest.