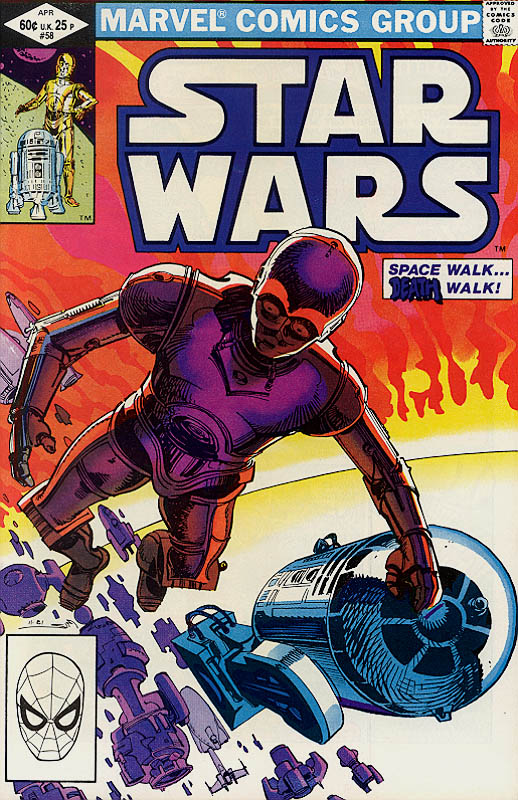 What is it ? : Luke, Lando and Chewbacca are taking the MIllenium Falcon to meet with an underworld contact to purchase some supplies, and Luke is worried that if they don't get there quickly, then their contact, Ferret, won't wait for them.
Meanwhile Leia is holding a meeting with the commanders of the Rebel base, while the base on Arbra is hidden in the Hoojib caves, the fleet has been patrolling the system, and will alert any Imperial patrol to the Rebel presence.
Leia has a plan to hide the fleet within the corona of the star under a protective force shield. The Rebels have constructed a Kerts-Bhrg generator, which creates a temperature controlled pyramid, which the fleet can be protected within, and then the generator can use it's thrusters to push itself down into the corona, hiding the fleet there. The generator is a massive station, which even manages to power itself and the shield directly from the energy of the star around it.
Shira Brie offers her help and everyone, even Plif, is enamoured with her looks and helpful attitude except Leia who continues to be incredible jealous of Shira's relationship with Luke.
They board the station, and activate the field, lowering it and the fleet into the stars corona successfully, and Leia takes a shielded shuttle to head back to Arbra, but R2-D2 notices something, and delays him and C-3P0 boarding the shuttle, leaving them aboard the shield generating station.
R2-D2 has discovered that the shield is developing instabilities, and when he and C-3P0 head to the stations control centre to inform the maintenance team, they discover that a control panel fire has released toxic smoke rendering them all unconscious.
Meanwhile aboard the Falcon, Lando and Luke are playing Novacrown, and Luke is winning, but a maneuver by Chewbacca knocks the board over, rendering the game a stalemate, and they arrive at the massive spaceship / station / marketplace of Bazarre.
C-3P0 contacts Leia, and informs her that they've discovered the generators are malfunctioning, which has destabilised the shield, but not enough to destroy the fleet. However, the station is going to lose it's orbit and pass through the hottest part of the Corona which will destroy the fleet.
Leia wants to return to the station, but her shuttle has to hide behind a moon when an Imperial patrol enters the system, so C-3P0 and R2-D2 must save the day.
R2 comes up with a plan, but it involves leaving the station, into the raging heat of the star outside. C-3P0's golden skin will protect him from most of the heat, but R2 will be destroyed without protection, so they wrap him in a reflective thermal blanket, and they head outside with 3P0 wearing a jetpack. However soon afterwards the heat destroys the jetpack, but R2 completes their journey using his fire extinguisher as a jet.
Leia, Shira and the others aboard the shuttle wait for the Imperials to complete their patrol and move on, and once they have, realise it's too late to save the fleet who will have already been destroyed, but they receive a communication from 3P0 only to discover that the fleet has been saved.
He and R2 connected the Shield Generator to one of the vessels in the fleet, avoiding the instabilities in the stations generator.
Meanwhile, Lando and Luke explore the marketplace of Bazarre, searching for Ferret, only to be surrounded by his thugs.

High Points : This is a well told story, with some good pacing, but it's all a bit of a macguffin. The shield generator station serves only one purpose, but is massive, far larger than the fleet it's protecting. They're putting the fleet in danger for no real purpose (why not just hide the fleet elsewhere, somewhere in deep space between the stars where no one goes), and the tension from an Imperial patrol is contrived.
But for it's flaws, the action moves along nicely, and it keeps you interested throughout.

Low Points : Okay, I've mentioned a few flaws above, but one I haven't is something not in the issue at all, although is setting up for a future story. It's obvious that the malfunction of the station is sabotage, and it's obvious exactly who it is that's done it. But worse, when that character hears that the entire Rebel fleet is going to be destroyed, and everyone in it killed, they say "How Tragic", which is such a sarcastic comment that it made be realise that it was sabotage and that they were the saboteur. Clumsy dialogue prematurely spoiled a future storyline.

So what do you really think ? : It's enjoyable enough even if it's all so contrived as to be nonsense. Their plan is terrible, they've spent resources far exceeding it's worth to carry out, and why is such a massive station so poorly manned.
In fact why do they need the base on Arbra, the shield generator station is larger, and apparently is supposed to be able to hide inside stars, so is far superior to a ground base.

Final Words : While its well done and enjoyable, it's really difficult to recommend this one as it raises so many questions and criticisms. So all I can say is it'll not waste your time, so give it a read and judge for yourself.