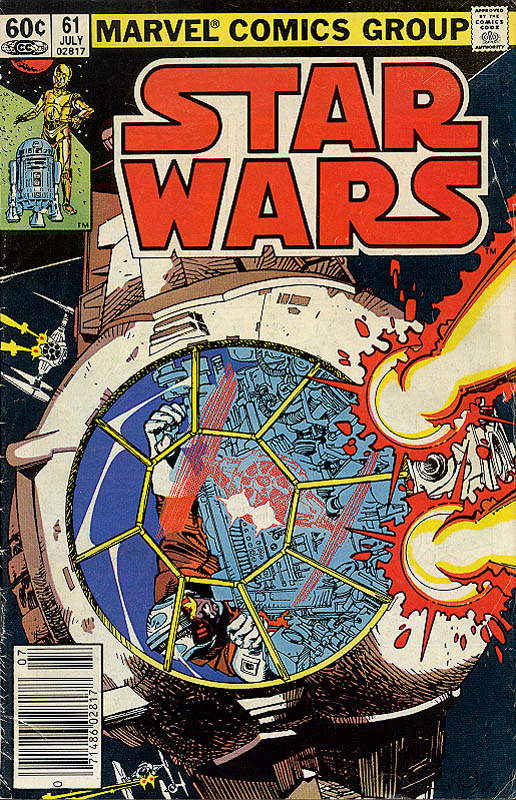 What is it ? : The Rebel base on Arbra is holding a medal awarding ceremony, Shira Brie is being recognised for her heroic actions on Shalyvane in rescuing her comrades, and is promoted to Captain. Leia is upset as Luke rushes away from her to congratulate Shira, and Leia realises how much she is missing Han.
Meanwhile Admiral Giel is aboard his Star Destroyer and he reprimands a crewman for being out of uniform, disliking the action but seeing it's value in keeping order while they're transporting something so valuable. He speaks to one of his aides explaining that the entire armada he commands is seen by the Empire as needed to transport the Teezl. A non sentient creature capable of sending messages anywhere in the galaxy instantly, being shipped back to the Capitol to give the Empire the tactical advantage over the Rebellion of instant unblockable, unmonitorable communication.
An Imperial Patrol away from the fleet detects a distress call, and while investigating is ambushed by X-Wings, and one of the pilots is forced to eject and is captured and interrogated into revealing the call signs for the armada.
Shira, Luke and two others take the Tie Fighters obtained from Ferret and return to the Armada posing as the returning patrol, and once they are within the fleet, they attack one of the Star Destroyers, causing it to return fire.
However it's location deep within the fleet leads to other Imperial ships being hit by the fire, spreading panic firing throughout the fleet as they all think they're being attacked.
Admiral Giel orders the Teezl used to block the Rebel communications down to a single monitorable channel, and one of the Rebel Tie's is destroyed as it is identified, and another, that of Captain Thorben is damaged and forced to retreat.
Luke and Shira cut communications to avoid detection, and prepare to release all of their blaster fire in one massive burst, leaving them with a few shots apart from the burst.
Admiral Giel recognises that two Tie Fighters are out of communication close to his flag ship, and orders them destroyed. Luke takes out a Tie blocking his shot on Giels vessel, and releases all of his energy in one blast, destroying the Teezl's life support systems and killing the creature, he then flees into Hyperspace.
Returning to Arbra, everyone seems somber rather than celebratory, and he is ordered to report to Leia, who reveals that Thorbens sensor data has been analysed, and the last Tie Fighter that Luke blasted was Shira's.

High Points : The Rebel plan to infiltrate the Imperial fleet is a good one, and adding the stolen codes instead of just relying on the Tie Fighters themselves just being accepted is a realistic layer of detail that I liked.

I was also impressed by the issue showing that Admiral Giel isn't like Vader and many other Imperial commanders, he dislikes disciplining his crew, even if he sees it is necessary, just enough of a difference to previous Imperial opponents who generally seemed a little cliched in commanding through intimidation and fear.

The space battle around the Armada is chaotic with the addition of the communication jamming leading to Lukes mistake in firing on Shira fairly realistic and believable.

Low Points : However, while I found that the battle was believable, Captain Thorbens sensor data being used to identify that Luke fired at Shira, killing her, I found to be stretching reality.
Thorben had been forced to leave the battle earlier when his Tie took damage. Are we to believe that after disengaging from the battle, he just loitered around, unmolested by Imperial Forces, monitoring the situation. Yet somehow arrived back at the Rebel base so much quicker than Luke that they had time to examine his sensor logs?

And perhaps this final criticism should wait until the next issue, but I'm thinking about it now, so I'll mention it. But while Luke fired at Shira killing her, isn't that just a terrible accident? Both were in enemy fighters, surrounded by enemy fighters.
Their entire plan was to look like the enemy, and communications were down, blocked by the Empire.
While it's a terrible thing to have done, which I believe would tear at Luke's conscience, I can't believe that he will be made a pariah (the name of the next issue) due to his actions, just would tarnish some of his reputation as the man that destroyed the Death Star, with Rebels looking at him as slightly more human and less their hero.

So what do you really think ? : Another solid issue, and the continuing storyline is hanging together particularly well, with each issue telling their own story, but building a supporting cast, particularly Thorben and Shira. As well as the plot line of obtaining the Tie Fighters and using them against the Empire until tragedy has struck with their disguises working against them for once.

Final Words : The overall plot line remains fairly obvious to me, but I'm enjoying the ride so will forgive that, however that won't stop me gloating when it's all revealed.