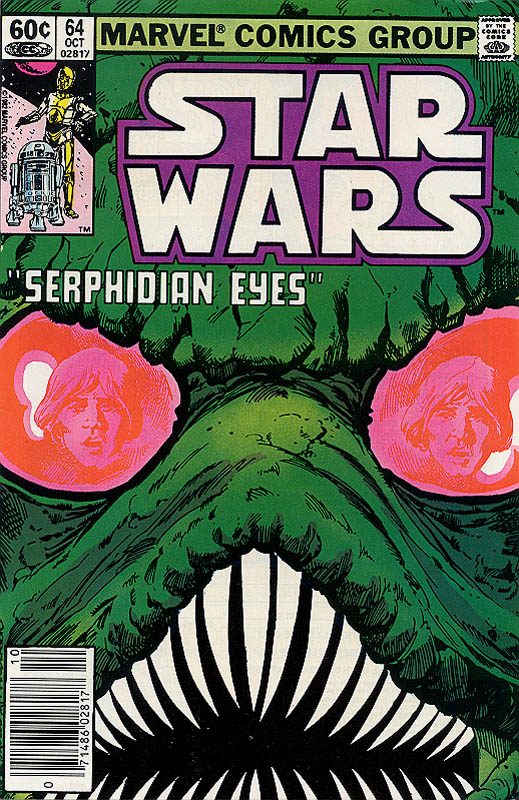 What is it ? : Luke and two other pilots, Cinda Tarheel and Berl, are dispatched to the world of Serphidi, the king there has become an ally of the Empire, and the Rebellion would like this situation reversed.
As they arrive in the system, they come under attack by Tie Fighters, and Cinda's X-Wing becomes damaged, crashing on Serphidi, with Berl and Luke following her down where they come under attack by the native Serp people. Cinda is captured after Berl is shot and killed, and Luke escapes into the countryside.
Luke rescues a Serp being attacked by a carnivorous plant, and is taken back to his home, and is told the history of Serphidi.
The planet was once hitech, but the technology was used for warfare and caused much death and destruction, so a peace treaty was signed where they would abandon their technology and return to a time of peace and chivary under one king. However recently a king has risen who has begun returning technology, and can only be deposed if he is defeated in the Doom Jousts.
The Serp that Luke has encountered is a knight and intends to challenge the king at the next competition in a few days, and takes Luke on as his squire, but they soon realise that Luke is a superior warrior, so the knight agrees that Luke shall be his champion and challenge the king.
Meanwhile at the Kings castle, Cinda is dressed like a fairytale princess, and protests that she doesn't want to marry the king, however the king tells her that she doesn't have enough scales for him to desire as a mate, and his plans are more culinary as he intends to have her served up as part of the next banquet. She tries to escape, but fails and the King expresses delight as he does enjoy playing with his food.
The day of the Doom Joust arrives and Luke's friend is the only challenger and is allowed to enter Luke as his champion, with the King and Luke taking part in a joust while riding horse like lizards and using lances with blasters built in.
The King is the superior warrior, or at least is more used to using these weapons and armour and has the advantage over Luke, who turns the tables by hurling his shield at the King disarming him and making him yield.
However the King is pulling another weapon while Luke is unprepared and Luke's Knight friend warns him, letting Luke blast and kill the King.
Luke's friend becomes the new King, one more friendly towards the Rebellion, and Cinda and Luke depart the planet aboard the remaining two X-Wings, wishing that Berl could have survived, but knowing that he died fighting for freedom.

High Points : The artwork for the space combat at the start of this issue is of the highest standard we've seen in the Marvel series so far, with the X-Wing and Tie Fighters rendered in great detail.
I also must complement the interesting backstory for Serphidi, a world which abandons technology to save itself from the devastating effects of advanced weaponry, as a reason why there's knights and jousting going on it's a fairly interesting one.
I found Cinda's assumption that the King had sexual interest in her, only to find out that he was planning on having her cooked and eaten, a hilarious moment, and one which made a lot of sense (why do alien's always find human women attractive in SciFi?). Although did make me wonder why they dressed her up in a fantasy princesses outfit, with thigh revealing slit in it (would you dress a lamb up in this way in preparation for dinner?).

Also, "Doom Jousts" are about the coolest thing I've ever heard named, quite simply awesome.

Low Points : However, everything else in the issue is a bit of a mess, from the briefing with Princess Leia at the start of the issue, where the background is drawn over the speech bubbles, making them nearly impossible to read, to the fact that Cinda is obviously just Shira renamed, since this story must have been written before Shiras fate had been revealed.
The medieval knights and jousting doesn't suit the tone of Star Wars particularly well, and the fact that the evil king still allows honourable challenges to his rule seems very un-evil king like.

So what do you really think ? : While there's a lot interesting in this issue, it's not a great one and I really wasn't impressed, we also seem to have skipped Luke's reinstatement into the Rebellion, he and Chewbacca found the evidence that Shira's death was planned to defame Luke, but we last saw them in space and haven't had any resolution to that storyline. With it just being dumped and us moving on.
Although that said, Cinda apparently being just a renamed Shira could mean that this issue was written out of sequence, and we might return to the Shira plotline next issue.

Final Words : After taking most of this month off of the Marvel Comics to work my way through Resistance, this isn't the most inspiring return to the series, hopefully things will return to form in the next issue.