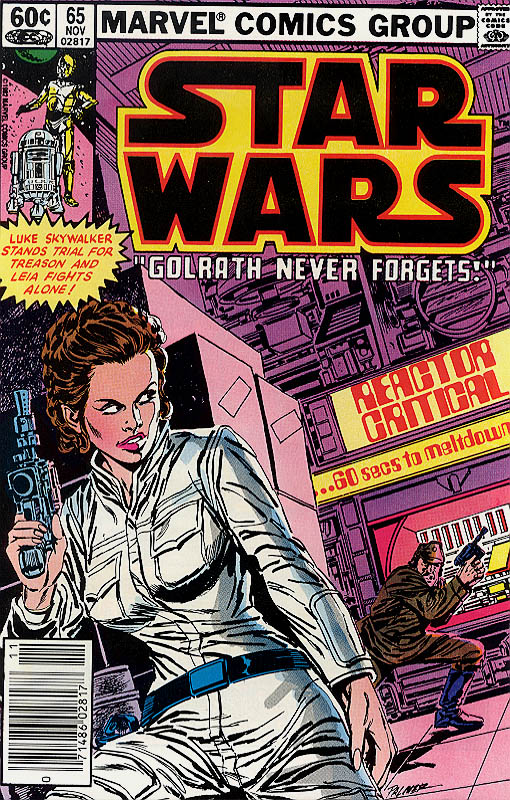 What is it ? : Luke is put on trial for his part in the death of Shira Brie, and his subsequent desertion, theft of a starship, and other actions. However the evidence he's gathered on Shira's role as a spy for the Empire means he is completely cleared.
Meanwhile 2 Rebels are discussing the trial, when one mentions being kept awake by lights coming from a rock he brought from Golrath, which causes the other Rebel to call for the commanders of the station, where he displays a feature of rock from Golrath.
The Rocks when warm, gather all light hitting them, and as they cool down they begin replaying the light, which Leia realises means that Golrath base recorded all of their activities, including their plans to establish their current base on Arbra.
They immediately scramble all fighters to raid and destroy Golrath base before the Empire can discover and use the recorded images, but come under attack as they arrive above the planet by Tie Fighters.
In the abandoned Golrath Base, former Admiral Giel has been assigned to search for clues that the Rebels may have left behind, a duty the Stormtroopers find boring, or at least they do until they find themselves surrounded by images of Rebels, which cause them to panic and shoot.
Giel realises the significance of the rock recordings, and the current raid, recognising that the Rebels will probably try to sabotage the bases Reactor, so places himself and guards there in wait.
While the Rebel Starfighters engage the Ties, one Y-Wing drops Leia off with Jetpack, which she uses to infiltrate Golrath Base, heading for the Reactor to sabotage it.
As she arrives, Giel recognises her, and quickly determines her value, sealing both of them within the reactor chamber, ordering his troops to leave, and setting the base to blow. Leia questions his apparent suicidal behaviour, but he explains that her death outvalues the destruction of the base, and his own value. And that there are worse ways of dying than as a hero to his cause.
Leia tricks him with her Jetpack, and slips away to where Lando in the Y-Wing can pick her up.
Giel realises that Golrath base is going to be destroyed, firing off a shot from his blaster at a passing X-Wing, and boards an Imperial Lander, heading off to the Executor to explain the situation to Vader, ordering the Tie's to attack the Rebel starfighters in mass. And as the base is vaporised, Leia and the Rebels escape into Hyperspace, except for Luke who realises his fighters hyperdrive has been damaged by Giel's blaster shot, leaving him alone and stranded with hundreds of Tie Fighters pursuing him.

High Points : The highpoint of this issue is definitely the Imperials, not only is Giel himself shown to be an intelligent character with some real depth, displaying a calculating willingness to die for his cause and a drive to regain his rank as Admiral. But also the Stormtroopers are detailed, with two in particular being given backstories, one as a high achiever, destined to join the Emperor's personal guards, and the other always overshadowed by his room-mate.
It's a surprising bit of detail, especially as both are dispatched by Leia, and either die there, or die later in the destruction of Golrath base.

I must also complement the Artwork, the X-Wing's and Y-Wing's look excellent, and the combat above Golrath is engaging and detailed.

Low Points : Although, immediately after complementing the artwork, I must comment that the Stormtroopers seem a little out of proportion, seemingly too wide and looking obese. Although, this may actually be a conscious choice, as these do not seem to be the most elite of Stormtrooper squads, as they are seen, helmets off, lounging around on duty, smoking deathsticks.

So, the issue starts with Luke on trial for the death of Shira, but last issue he was serving with the Rebellion no problem? Which supports my theory that the last issue was supposed to be Luke and Shira, rather than Luke and Cinda, but was just published out of sequence, so they swapped the name and hair colour to make Cinda a new character. But if the issue is out of sequence anyway, as it obviously shouldn't be between Luke getting the information on Shira and his trial, why didn't they just make it a flashback issue to when Shira was still alive. Have Luke remembering an adventure with his friend who he's now discovered was a traitor.

The engineering of the Galactic Empire must come into question again in this issue, normally people joke about the lack of handrails and other safety features in Imperial design. But the fact that Golrath base is destroyed by Giel pulling one easily accessible lever, seems dangerous, especially considering that this appears to be irreversible. It just seems bad design.

And finally, just as a comment, Lando is the pilot that rescues Leia in this issue, but is never seen or mentioned apart from a single frame. #RecognitionForLando

So what do you really think ? : Although the plot is contrived, with holographically recording rocks (reminded me of an Nigel Kneale television story, The Stone Tapes), and the solution is too easy (Giel actually sets off the self destruct for the base for them), it's the characterisation of the Imperials which makes this issue interesting. Giel especially is fascinating to observe, his attention to detail, insight and courage makes him stand out from the average Imperial officer who is normally to be shown to be lacking in brains and backbone.
But Giel is not only a challenging opponent for the heroes, but also one we can somewhat "like". He heads off to face Vader at the end of this issue, not skulking away or blaming others, but willing to answer for his actions.

Final Words : Upon reading this issue I just knew I'd enjoyed it, and not until I was forced to lay it out for this review did I come to realise how good characterisation can raise a mundane story to a interesting readable one.
The issue spends more time with Giel gathering himself after his skirmish with Leia, getting his hat and leaving the station, than it does on Leias escape and rescue, leading to Giel coming across as a more considered and thoughtful character. Leia just rushes off, Giel gathers himself, considers the situation, makes sure he's in full uniform and prepares to leave, just pausing long enough to vent some anger by shooting at Luke's passing X-Wing.
And as mentioned above, the moments spent fleshing out Stormtroopers, giving them some history are excellent, spending some time getting to know these most faceless of enemies, is an odd, but extremely enjoyable addition to the story.