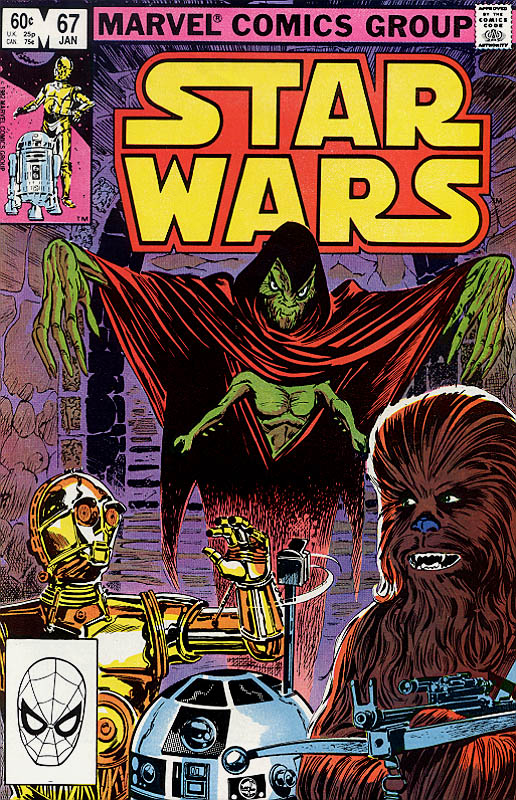 What is it ? : The Rebels are attending a briefing in their base on Arbra as information has been received on the location of Han Solo, when R2-D2 hears a voice calling for help, he decides that since he is the only one who hears it, that the others will dismiss it as his imagination, so he goes to help whoever it is, and is observed heading into an unexplored section of the caves by one of the Hoojib.
The Hoojib informs Plif, who tries to enter the briefing to speak with Princess Leia, but is stopped by C-3PO who tells him that she is currently too busy.
Plif explains the situation to C-3PO who decides to deal with the situation himself, but is told by Plif that the Hoojibs have never explored that particular part of the cave structures because they felt the presence of evil, so C-3PO recruits Chewbacca to help as well.
They head down into the tunnels where R2-D2 was last seen and they encounter a force shield, but only Chewbacca has difficulty passing through it. On the other side they find an abandoned city, and exploring a little further they discover R2-D2 partially dismantled.
They encounter a being called The Darker, who offers them spoiled food, and explains that the city was once inhabited by an advanced species who wanted rid of their negative emotions, and channeled them out, creating him. They then sealed him within the city with the force field which doesn't allow the passage of negative emotions, hence Chewbacca having some problems passing through earlier. The Darker reveals that he con control emotions, and floods the Hoojibs with fear, making them cower in terror, he then reveals that he intends to use R2-D2's and C-3PO's parts to overload the force field and allow him to leave. This angers Chewbacca who attacks, but the Darker uses his powers to redirect Chewbacca's rage onto C-3PO.
C-3PO evades Chewbacca by squirting oil from his mechanisms into Chewbacca's eyes, and flees into the city, discovering a library. He reads one of the books, which is only a cookbook, but then finds information on the force field.
Meanwhile, Luke is looking for the droids, but Lando suggests that they're just enjoying a rest, so Luke decides they deserve some down time.
C-3PO finds and repairs R2-D2, but then Chewbacca catches up with him, but C-3PO talks about Han to him, and those emotions allow Chewbacca to regain control and return to attack the Darker. The Darker channels fear into Chewbacca, but the mighty Wookiee resists, and C-3PO tells him that the force shield around the city doesn't just stop the Darker from leaving, but touching it would destroy the being. Chewbacca begins to give into the waves of negative emotions, but while the Darker is distracted by the effort to control the Wookiee, the Hoojibs rally and cause enough of a distraction to let Chewbacca rally once more and hurl the Darker into the force field, destroying him forever.
The city begins to be destroyed by the negative energy released by the destruction of the Darker, and Chewbacca, the Droids and Hoojibs flee as the entire city is destroyed. They emerge back into the Rebel base, where Luke tells them that the holiday is over, and they've got to get on with attempting to rescue Han.

High Points : Although the Darker comes across as a fairly standard villain, the details of his creation and imprisonment are quite interesting. I particularly liked that his creators had made a method of destroying him, but without any negative emotions, didn't actually have the will to destroy him.
The story moves along nicely, although there's a bit of an information dump with the Darker telling them his life story, monologuing to them for some time about his creation and his plans, but his turning of Chewbacca's rage, unleashing it at C-3PO is interesting, and it's nice to see C-3PO actually being quite heroic, both using his talents to translate the ancient texts revealing how to destroy the Darker, but also talking Chewbacca out of his rage by talking about Han Solo.

Low Points : Well, as mentioned, the Darker is a fairly standard villain, without any real plan beyond escaping, even if that's pretty understandable after millenia of imprisonment, and he's fairly easily defeated in the end.

The "joke" of Luke thinking that they've been resting, when they've actually been battling for their lives, is weak and totally unnecessary.

Also, during the briefing we see a little of at the beginning, the Rebels are discussing the Bounty Hunters that were hired by the Empire< Dengar, IG-88, and Bossk, wherein Bossk is incorrectly described as "the Monarch of the Qotile system" {actually I'm wrong, looking at Wookieepedia, I've discovered that apparently Bossk became the Monarch of the Qotile system after capturing the previous Monarch. A strange version of Monarch, but then again, Amidala was an elected Queen, so it's already been established that Monarch can be a bit weird in the Galaxy Far Far Away!}

So what do you really think ? : It's an enjoyable enough story, and I can understand that it's just a one off story, not really related to any of the overall storyline of the comics, but I would have preferred it to not have been quite as self contained. For example, rather than the city being totally destroyed, leaving them remaining would have left a mystery of these ruins beneath the Rebel base, and even if they never returned to them it wouldn't have felt quite so unnaturally neat and tidy.

Final Words : The story of The Darker, a creature formed from the negative emotions cast out from an advanced species reminds me of Armus from the Star Trek: The Next Generation episode Skin of Evil, where the antagonist of the episode is created in exactly the same manner.
Both stories seem to suggest that the negative emotions have some kind of greater power than the positive ones, something I could talk about at length, but just draw attention to as I think it points out something very human that both sets of writers had the same opinions.