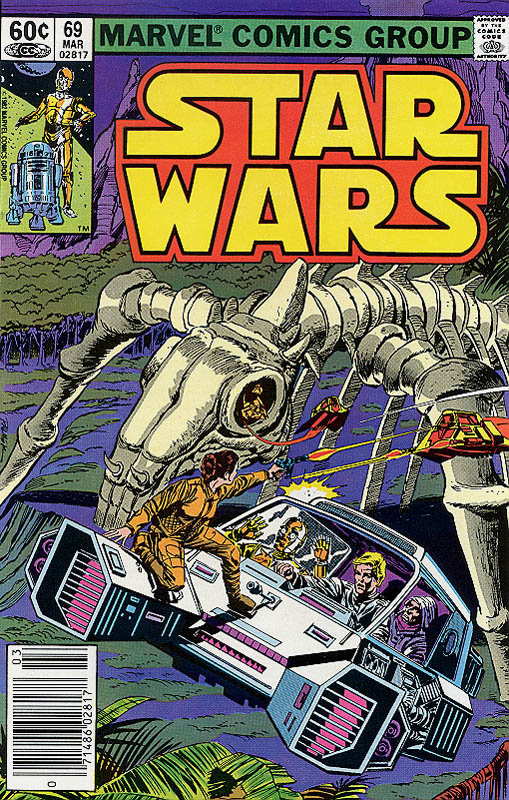 Marvel Star Wars Issue 69: Death in the City of Bones

What is it ? : While attempting to get information on Han Solo's location Leia has tracked Dengar to Mandalore, but he has sprung a trap on her leading to her capture by Imperial Forces.
She is taken back to their base, The City of Bone, which is built into the skull of a giant creature. She is taken to the Imperial leader, Suprema, who assures her that he will soon crush Fenn Shysa and the rebelling forces on Mandalore, and she is taken away to the prison cells.
One of her Stormtrooper guards assaults the other, knocking him unconscious, and reveals that he's actually Fenn Shysa, who'd tracked Leia and Dengar from his camp and replaced one of the Stormtroopers. They free Tobbi Dala, one of Shysa's comrades who was recently captured and commandeer an airspeeder, battling their way through the City, managing to destroy the control box which restrains the slaves, freeing the people of Mandalore within the city and finding and capturing Dengar once more.
They return to Suprema's office, and Tobbi Dala is shot and mortally wounded, but they force Suprema to open the doors to the city to allow them to flee. Dala remains behind to make sure Suprema doesn't close the doors before they can exit, and puts on his Mandalorian Armour which had been on display in the office.
Leia and Shysa board their speeder again with Dengar, and exit the city, but Dala closes the doors on their pursuers, causing them to crash and their fuel to ignite destroying the city.
Meeting up with Mandalorian forces outside, they interrogate Dengar who reveals that he wasn't the one in league with Boba, but did overhear him talking about a hideout near the Anga System.
Meanwhile, Lando and Chewbacca have gone to the Wheel, and Chewbacca threatens an alien until he reveals Bossks location, on which Lando proclaims "Aw, no. No! NotĂ˘â‚¬Â¦there!"

High Points : I have to complement the design in this issue, the city built into the skull of a Mythosaur is a fantastic setting, if a little generic inside (it looks like almost every other city they visit), and the Airspeeders used throughout are really interesting designs, one type being very reminiscent of Snow Speeders, and the other being a strange propellor driven Skiff.

Low Points : Although there's lots happening, not much of it makes too much sense, there's a lot of running around, and I had to go back and re-read exactly why they'd returned to Suprema's office, as there didn't seem to be a whole load of a point to it. For example, they free Tobbi Dala, for no other reason than so he can be wounded and blow the city up later, when he closes the cities doors and the chasing speeders crash and explode.
Since when were speeders explode with the force to destroy a city? There's no mention of them carrying explosives (which given the Empire intended to destroy the rebelling Mandalorians could have made sense. A simple "Yes and we've loaded our speeder with explosives already, so we can blow them off the face of Mandalore!", would have made it make sense. Even a comment on the poor design of the city, Shysa planning a later attack and noting that "Their fuel supplies are right next to the blast doors, if we can breach the doors we can blow this whole place up!".
But we get none of that, just doors close, speeders crash, city explodes killing everyone.

And wait a second, they destroy the control box and free all the slaves, but they then blow up the city? Did they just free then kill all the Mandalorian Slaves?
There's mention of all the doors being opened, but they open the doors, jump in a speeder and race out of the city. They don't tell anyone the doors are open, they don't warn anyone that the city will blow up soon, anyone who's a little tardy in exiting gets wiped out, which I can only imaging is a very high percentage of the slaves.

So what do you really think ? : While it does have a number of redeeming features, like the nice design and action, the story really doesn't have any substance or make much sense, and to tell the truth is a bit of a mess.
For example, when Shysa takes the place of one of the Stormtroopers, often the Marvel comics will show an unexplained figure near to a Stormtrooper, or otherwise show that something is happening which at the time seems just like it's normal worldbuilding, which makes sense later when you discover the truth of the situation. In this comic there's a mention of two Stormtroopers being the last to return, but no other sign that anything is going on, until bam, one of the Stormtroopers is Shysa. Which just raises more questions, for example how did Shysa knock a Stormtrooper unconscious, and swap into his clothes without the other trooper noticing?

Final Words : This whole plot of having the heroes each tracking down one of the bounty hunters from Empire Strikes back is quite interesting, even if we know that the information won't be found until the last one (although that could have been interesting, having Leia capture the information, but Lando and Luke performing their missions anyway, since they all happen concurrently. Would have been an interesting twist on each story, to have them go through hell, and then discover it was all for naught).
But this issue seemed even more pointless than that, since Leia gained no useful information (unless they all gain an aspect of the info, and will come together at the end with the solution), the Mandalorian plotline doesn't really seem to go anywhere, since although they free some of the slaves, and blow up the slaver base, we're left in no doubt that the Empire will be back, and Mandalore isn't free.
It's pretty, confused, and pointless, not a great combination.