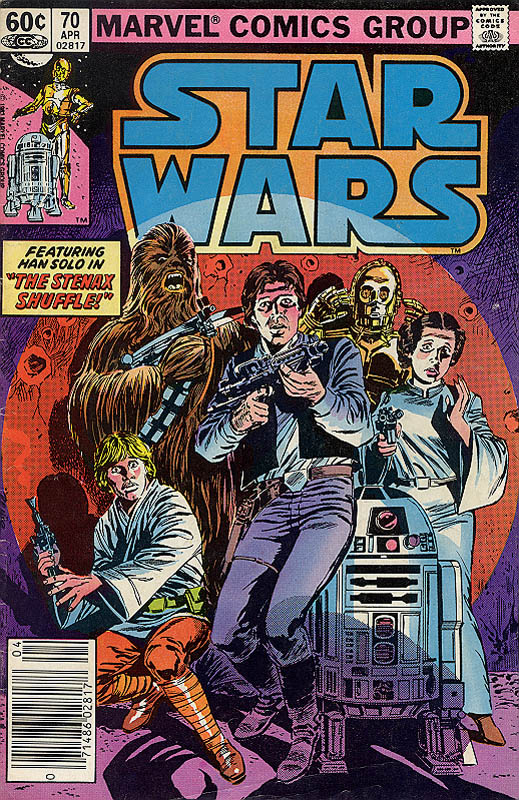 What is it ? : Lando and Luke are taking their part in the mission to locate the other bounty hunters who might know where Boba Fett has taken Han before going to Jabba. They've discovered that both Bossk and IG-88 are on Stenos, so have teamed up, Luke and Chewbacca recall a story from when they last visited Stenos with Han just after the destruction of the 1st Death Star.
The entire group of heroes visited the world to find out what had happened to a Rebel cell, and made their way through the city to a temple where the Rebels had been based. On their way they encounter the Imperial Governor, Matrin, who once served in the Senate and would recognise Leia, forcing them to smuggle her past him.
In the temple, they find it is abandoned, but encounter a group of smugglers headed by Rik Duel, who Han knows, and consisting of Dani a flirtatious red skinned Zeltron and Chihdo a Rodian. Rik explains that he also has joined with the Rebellion, and the Rebel leader, Colonel Kindar, asked them to remain behind to locate a certain artifact, as he believed finding it would bring the local inhabitants, the Stenax into the Rebellion.
The artifact is a statue of the Stenax god, Vol, and the Stenax believe it is actually their god, and since the statue was lost they have been forbidden from flying and entering high places.
They search the temple, and find carvings which C-3PO translates into coordinates with R2-D2 calculates, allowing them to dig up the statue, upon which Rik reveals he just wants the statue to sell to Governor Matrin. Chihdo has summoned Stormtroopers and the heroes get pinned down in the temple as Rik and his team flee to their ship. However, the Stenax have heard of the discovery of the statue of Vol, and fly into the temple, massacring the Stormtroopers and allowing the heroes to flee to the Millenium Falcon and escape.
Rik and his team are ambushed by Governor Matrin, and forced to hand over the statue when they come under attack by the rampaging Stenax.
Back in the current day, Luke advises Lando to land outside the city, as the Stenax may not be that grateful for the discovery of their god.

High Points : The characterisation of the three smugglers, Rik Duel, Dani and Chihdo I thought was excellent. Rik was so obviously duplicitous, but I still couldn't see where the betrayal was coming from as his background story seemed actually believable. Dani was so over the top flirtatious with Luke, and seemed to be trying to distract him, but again, Leia seemed to stick up for her behaviour as natural for a Zeltron. But best of all was Chihdo, who seemed so friendly and helpful, that even after the betrayal was revealed, I believed that he perhaps hadn't been in on it, until it's revealed that he's actually brought Stormtroopers by telling them of Luke, Leia and Han's presence.

I'm also impressed with the portrayal of the Stenax, gargoyle like creatures, who seem peaceful, at least until the statue of their god is discovered. I do wonder if their rampage was just due to offworlders handling their god, or whether the discovery and return of the statue has returned them to more violent and warlike ways. I guess I'll find out next issue.

Low Points : Even though I couldn't see the exact betrayal coming, the existence of a betrayal was obvious, and everything just seemed too set up for just this story. The Stenax aren't allowed to fly or enter the high places while the statue is lost, but the statue was lost in a temple on a hill, so no Stenax is allowed to enter and search for it.

It's also not clear why the Governor is relying on Rik to find the Statue for him? There's no taboo on the Stormtroopers entering the temple, and he could put far more people into the task than three smugglers.

When this overarching storyline began, where Luke, Lando and Leia were each tracking one of the bounty hunters seen in The Empire Strikes Back. Allowing more to be discovered about these elusive figures, but also for each of the heroes to have a stand alone adventure. However, here we've got a flash back episode, as if the writers are too scared to not have Han Solo stories, and also Luke and Lando have teamed up, because Bossk and IG-88 are on the same planet, totally destroying this aspect of the storyline.

So what do you really think ? : There's not much to this issue, but perhaps it's all set up for next time, if so, that issues going to be brilliant. However, without a lot happening in this issue (most of it is the heroes digging in an abandoned temple), it's just pretty uninteresting.

Final Words : The story was easily summed up, because there's no real story here. Hopefully it's just setting up a more interesting visit to Stenos next issue.