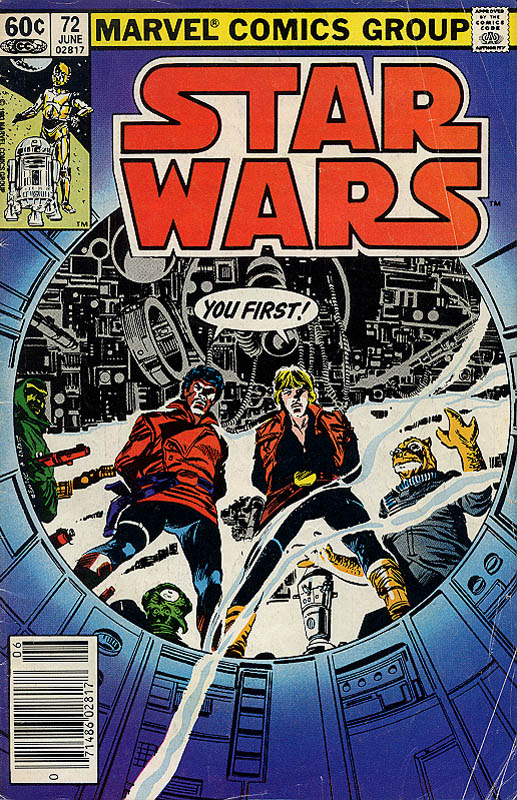 What is it ? : Luke and Lando have been ambushed by Bossk and IG-88 who have deliberately lured them in using the Rodian Chihdo frozen in Carbonite, to make them think it would be Han Solo's body instead.
However, Dani and Rik Duel come to their rescue, trying to liberate Chihdo as well, but the rescue doesn't go well, and only Luke and Rik make it out.
Meanwhile Chewbacca becomes bored by waiting for the two in the Millenium Falcon, so leaves sneaking through the city on a search for his friends.
Lando discovers that Barpotomous Drebble has paid to have Lando carbonite frozen and shipped to his homeworld, but Dani and Lando manage to escape from their guards, but stumble into the Carbon Freezing chamber, where they discover that Bossk and IG-88 were waiting for them having shepherded them there as part of the trap.
Luke and Rik return to rescue their friends, but the rescue appears to go wrong, only for them to be rescued by the Stenax, who Chewbacca has befriended through a display of physical prowess and violence.
As Lando, Luke and Chewbacca depart Stenos aboard the Millennium Falcon, Rik plans to unfreeze Chihdo, and to try to get the Stenax to work with him, but the heroes are surprised when they discover Dani has snuck aboard the Falcon with them.

High Points : The storyline is at least more enjoyable than the last 2 parts, with all of the parts coming satisfactorily together at the end, but there's still not a load of substance to the story.
I was impressed by the Bounty Hunter plan, in knowledge that Lando and Dani would try to escape, of allowing them to, but providing the only obvious escape route be to exactly where they wanted them, the Carbon Freezing chamber. It made a lot of sense, and made the two come across as skilled intelligent opponents, instead of just buffoons, as the comic often makes its antagonists.

Low Points : The Stenax are recruited too easily by Chewbacca for my liking, he basically beats one up, so they decide to follow him because he's a mighty warrior. We've not seen that behavior from them before, having been portrayed as a patient religious people, willing to even give up something as basic as flight for their god. But this just reduces them to just pack animals, following the most Alpha warrior around.

I was also annoyed that Rik "wins" points when talking with Luke about rescuing their friends, by reminding him that Chihdo needs rescued as well, and chiding him for forgetting about the Rodian. It feels like a cheap victory, and the fact that Luke obviously feels bad for not remembering Chihdo in the moment and seemingly "abandoning" a comrade just doesn't feel deserved.

So what do you really think ? : I've been disappointed with this storyline throughout, and now on it's conclusion it fails to redeem itself. The entire Stenos storyline hasn't really come to anything, with the Stenax, and Rik Duel and his gang being interesting additions to the comic, but nothing particularly interesting being done with them.
Also, the overall storyline of Leia, Luke and Lando going after seperate Bounty Hunters in their search for Han, hasn't really been what was promised. As now at the end we see that all of their investigations have come to dead ends, and they've no real leads to Han's location.
While I knew they couldn't rescue him, as that comes in Return of the Jedi, I did at least expect a confrontation with Boba Fett, and some reward for this entire block of stories.

Final Words : Well, at least we've got a fairly interesting addition to the group of heroes for at least another couple of issues, in the form of Dani. The Zeltron seems to have a good heart, so I can see her not betraying the heroes, but her values and behaviour differ so much from them that she should lead to some interesting scenes and storylines.