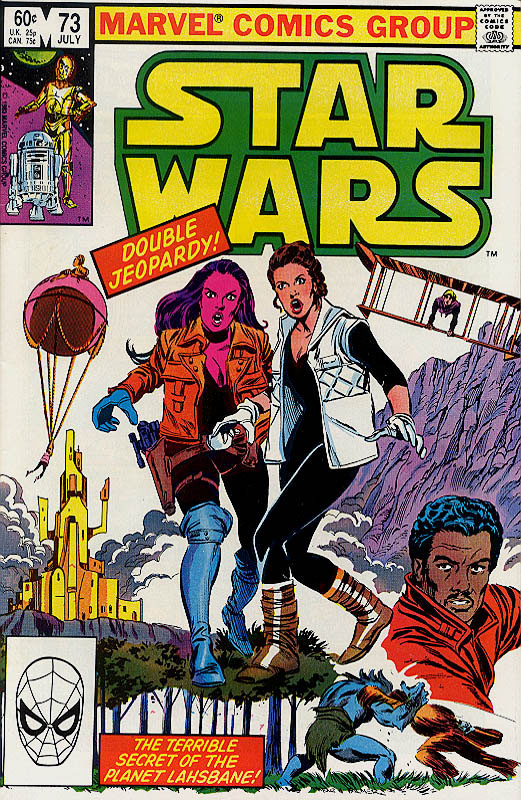 What is it ? : The Rebels, Luke, Leia, Lando, Chewbacca and the Droids, are tracking a lost Rebel Pilot, and it appears that he has crashed onto the planet Lahsbane. The natives on the world frustrate Luke's attempts to negotiate with them as their behaviour is childish and they won't take the threat of the Empire seriously.
They do discover that the Lahsbees have found the pilots flight recorder and placed in their forbidden city where the Rebels aren't allowed to go. Chewbacca and R2 work on getting the Falcon functional again, as it's intake filters are blocked with a pollen present on Lahbane, and it cannot currently fly.
Dani, who is still accompanying the heroes since the last issue and Leia get into a disagreement, where Leia insults Dani's abilities as a thief, and Dani questions Leia's purpose in the group since she just throws her rank around but doesn't contribute anything. They end up challenging each other into retrieving the datatapes from the forbidden city to prove their worth.
They construct crude balloons to cross the valley to the city, but before they can depart, and Imperial patrol lands nearby and nearly discovers them, but Dani uses her Zeltron pheromones to distract the officer in charge and the patrol moves on, allowing the pair to begin their journey.
Luke and Lando discover their departure, and Luke constructs a glider to follow them, but the pair come under attack by a hulking creature, a Huhk. Chewbacca fights the Huhk, but it is even more massive than the Wookiee. They discover from C-3PO that the Huhk is actually the adult form of the Lahsbees, and Lando discovers that they are also vulnerable to energy weapons on Stun setting, and the creature collapses allowing Luke to follow.
In the city, Leia and Dani discover the flight recorder along with masses of treasures, but are discovered by the city's Huhk occupants, but are rescued by Luke using his blaster on Stun.
Leia and Luke return to the now repaired Falcon with the tapes, but discover Dani has stolen treasure from the city and has taken the Imperial Shuttle to return to her comrades, Rik and Chihdo. Leia is concerned that the Lahsbees will be upset with them stealing the tapes, but Luke explains that as soon as they discovered the tapes were technological, they wanted nothing to do with them.

High Points : Dani provides an interesting addition to the team throughout this story, and it's sad that she appears to be moving on already, her combination of honesty and her skill set really provides some interesting twists to the story, and I can't help but agree with some of what she says to Leia.

The Lahsbees and Huhk relationship with the abandoned city is also quite interesting, but doesn't stand up too well to examination.

Low Points : This story suffers badly from the world just existing for the story, you don't get a feeling that there's stories on this planet outside this one. The Lahsbees becoming Huhk idea just seems to exist to act as a surprise in the story, as does their vulnerability to stun weapons, there's no real explanation given why there's a fully functional, yet abandoned high tech city and how the Lahsbees have constructed it while yet shunning technology. There definitely feels like there needs to be an extensive background story as to how this species came to be, and how the city was built, but we're given none of that.
I'm also totally intrigued by the Lahsbee lifecycle. They're born as Lahsbees, intelligent yet childish (which makes sense since they're only children) creatures. However at puberty they become Huhk's, massive mindless savages. But that just means that the only members of procreation are the Huhks, and makes me wonder who teaches the kids to speak? Do the Huhks just mate and then abandon their offspring for the other Lahsbees to collect and educate? So many questions, and none of them ever seem to have been answered if Wookieepedia is anything to go by.

Also, while it's nice to see Dani using her Zeltron pheromones to distract the Imperial officer, they're obviously extremely powerful as the officer doesn't question what a Zeltron is doing on Lahsbane at all? The patrol encounters her in the forest, she dances entrancingly, and they move on thinking as to how they'd much rather be stationed on Zeltron.

So what do you really think ? : Not a great story, but it does keep going pretty well, with a few encounters leading smoothly to the end. But a lot of it is setting the scene, as they speak to the Lahsbees and set up the story, and Dani and Leia have their falling out leading to them heading to the Forbidden city.

Final Words : There's been a bit of a run of stories lately which have been quite disappointing with the whole bounty hunter sage really not amounting to anything, even the clue Leia picked up at the end of the first part of that was never followed up. Now we seem to be onto another storyline, which isn't really explained, searching for data the Rebel Pilot Yom Argo has gathered, something I've noticed continues into the next few issues as well, and without any context it just seems a little pointless.
Given that they've now abandoned their search for Han to take up the search for Yom Argo's data, it would be nice to know what's so important that they've basically forgotten about their friend.