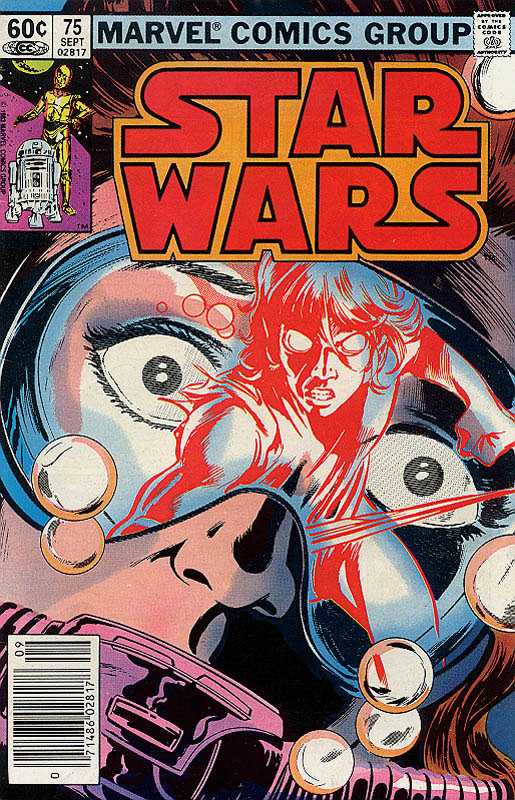 What is it ? : The Empire has fired a missile at the planet of Iskalon, which has caused a massive tidal wave which smashes the fragile city of Pavillion. Luke and Leia are caught within the city trying to help Kendle as the glass around them shatters and water floods in, Luke locates Leia discarded oxygen tanks and the two share, finding that the water has revived Kendle. However as she leads them through the remains of the city, they encounter another Iskalonian, Kiro who confronts them, causing Kendle to flee and smashing their oxygen tank.
They discover that without the bulky tank they can exit the city and head for the surface, just managing to reach it where they discover the king of the Iskalonians, Primor floating dead, and they find Kendle once again.
Kiro attacks once again, and Luke confronts him, and Kiro asks why they are protecting a traitor, explaining that it was Kendle that told the Empire of Luke and Leia's presence on Iskalon causing the attack and deaths. And explaining that he smashed their oxygen tank to allow them to exit the city, as Kendle had been leading them deeper into the city where they would become trapped.
Meanwhile on Gamandar, Lando lands the Millenium Falcon using Prince Mone's credentials, then disguises himself and uses the name Barpotomous Drebble to pretend to be a war profiteer.
C-3PO has to explain this deception to Mone in terms he might be able to understand, such as hiding in a cave to avoid a predator, and Mone find's it incredible that species can operate in such a way.
Using their cover as War Profiteers, they offer to buy up droids taken from prisoners and slaves, locating a 3PX droid, the same model as used by Tay Vanis, and purchasing it. However it refuses to co-operate with them until they mention taking it back to Luke Skywalker, a name it recognises. They encounter Admiral Tower, who plays along with their deception, however his spy from Iskalon has arrived and informed him that they are Rebels, and the group is soon see unconscious in prison except for R2-D2 who has wandered off and ingratiated himself with an Imperial work group.

High Points : I've kind of skipped over in my summary about my favourite part of this issue, which is R2-D2 trying to gain access to areas of the Gamandar Citadel, but being stopped. So he joins a workgroup of Imperials, working hard and making himself indispensable. When his hard work is noticed, some officers try to identify whose team he is part of, and realising that no one seems to be able to claim credit for R2's hard work, a young officer claims responsibility and the associated kudos for having such a hard worker in his detail.
R2 then uses his "owners" credentials to gain access to the parts of the Citadel he was trying to access before but wasn't allowed.
I thought this was a fantastic scheme, using the Empires innate infighting and it's officers need to claim credit whenever possible.

I also really liked the method that C-3PO has to use to explain the need for deception, liking it to the need to physically hide from a predator, making Mone understand the need for it, but continuing to increase his disgust at other species for living that way.

Low Points : Given the entire set up for the Iskalonians is that they don't even understand the concept of lying, never mind being skilled liars themselves, the fact that Kendle is a traitor, telling secrets to the Empire seems odd. Not only is it completely against what they're spending time showing us is natural for her species, but it's also completely at odds with everything we've seen so far.
When the heroes arrived on Iskalon last issue, we were clearly shown them being followed and monitored by a figure, a figure we saw depart Iskalon for Ganandar last issue, and arrive this issue and inform on Lando to Admiral Tower.
So what has Kendle actually told Tower? Because everything he has acted on so far has come from the agent we've been shown, rather than from Kendle, who wasn't shown to be acting out of character last issue.
If they'd wanted to make Kendle a traitor, I think I'd much rather have has it as an unknowing act, with the Imperial Agent getting secret information from her because she simply doesn't understand the concept of not telling them.

So what do you really think ? : This issue spends a lot of time with Luke and Leia escaping the flooded city, but this section definitely lacked a sense of tension, and I much preferred the sections with Lando on Gamandar, as not only was there the tension of the spy identifying them, but perhaps Mone not understanding the need for deception and privacy. Lando beginning to use Barpotomous Drebble's identity was pretty amusing as well, and I'm enjoying this more sneaky and somewhat more petty side to Lando's personality.

Final Words : So, R2-D2 to the rescue next issue, and given that he's been the star player this issue, I'm definitely looking forwards to it.
My first thoughts are that the plot lines on Iskalon were pretty much over with, because with Kendle's treachery known I can't see where they'd go from there. But I just realised that her ability to lie is pretty much a superpower (kind of like the movie "The Invention of Lying" with Ricky Gervais) so Kendle still has the opportunity to cause all sorts of shenanigans next issue.