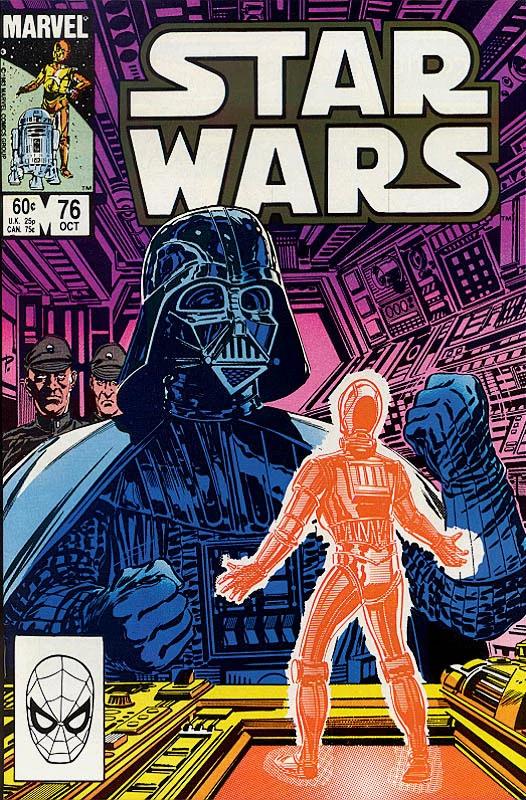 What is it ? : Darth Vader arrives in the Iskalon system to check whether the Imperial subjugation of the three worlds in the system is progressing, and he is contacts by K-3PX who informs him that Admiral Tower has attacked the Rebels on Iskalon and that the attack has endangered Vaders son, Luke Skywalker.
Meanwhile on Iskalon, Luke, Leia and Kiro are spending the night among the floating debris and ruins of Pavillion when they come under attack from a massive beast, a Chiaki, which has been drawn by the destruction of the city. They drive the creature off, and later come under attack by survivors of the city led my Kendle who has declared herself leader and blames the offworlders. Luke uses the force to drive the attackers back, but find himself unable to calm them due to their hive mind like mentality.
On Gamandar, Lando, Chewbacca and Prince Mone awaken in a prison cell, where they are interrogated by Admiral Tower, who informs them of Kendles betrayal, done to try to save her husband and family. However before he can get too far into the interrogation, K-3PX comes to Tower informing him that Vader has summoned him, and that he is under arrest. He is taken to a holographic communication from Vader, who sentences him to death.
R2-D2 still working away for the Empire and earning their trust has now been given security clearances, and enters the prison block, opening their cell after Tower is taken away, the heroes return to the Millenium Falcon which R2 has given clearance to leave.
Luke, Leia and Kiro have faced multiple attacks, driving them back with their Stinger weapons and the force, but when the Chiaki returns as well things look bad, especially when Kendle is killed by the beast. However, the Millenium Falcon arrives and drives the beast away with its weapons, and Mone commands the people to end their attacks.
While he grieves for his wife, he tells Luke and Leia that they should leave and inform them that they are not welcome in Iskalon, that no new Pavillion will be built and that the Iskalonians will return to the depths and shun contact with offworlders in the future.

High Points : I was hugely impressed with the ending of this one, usually the comics make the heroes win, they defeat the Empire and everyone loves them for it. However here, Prince Mone banishes the Rebels from his world, he isn't impressed at all. Not only have they brought the Galactic Civil War here, destroying a city, but their ways of deception led to his own wife becoming corrupted and her death. He is disgusted by what he has seen, that the heroes themselves will twist the truth and lie and cheat when necessary, and that to him they are no better than the Empire.
It's a brave and interesting ending, which makes this story stand out among all of those that I've read in the comics.

I was also impressed by Kendle's development as a villain, she takes the next step from lying, to seizing power and deceiving her people to cover up her earlier actions, leading them against the offworlders who can be blamed for the destruction. It's a sensible next step, and one which it's logical for her to make, taking her down the path to villain, even if it is for fairly innocent reasons.

Low Points : For an issue named "Artoo Detoo to the Rescue", R2 doesn't really get to do a lot. He continues being given clearances for working hard, and then just trundles into the prison and frees Lando and the others from their cell. The name's descriptive, but I definitely expected more of the story to be about R2 and his heroic actions when everyone else is captured or in danger.

In fact, given that it is Vader who arranges for the removal of Admiral Tower and the guards to the prison, allowing the heroes to just kind of walk out, a rather more accurate, and possibly more interesting title would have been "Darth Vader to the Rescue".

Everything just gets wrapped up to neatly for my liking, Vader removes the guards, Lando escapes with the Falcon and rescues Luke and Leia. While the final couple of panels really impresses with the twist I liked so much above, the rest of the comic is just about tidying up the plots that the characters are involved in.

And once again, the overarching plot doesn't go anywhere, the heroes have no idea what happened to Tay Vanis or his droid, which was their entire reason for coming here. The same plot which wasn't resolved in the story on Lahsbane, the same plot they left the search for Han Solo unresolved to deal with. In fact it seems like the heroes haven't had any successful resolutions to their stories since "Golrath Never Forgets", 11 issues ago, and that was just tidying up their own mess.

So what do you really think ? : Although it's got one of the best ending to one of these stories I've read so far, this issue doesn't really amount to much, everything just wraps up too neatly, and they squander the threat of Darth Vader, making him more of a problem for the villains than the heroes. I wasn't really impressed with the entirety of the Iskalon storyline these past 3 issues.

Final Words : When we reached the end of the issues that I read when they were originally published back in the 70's and 80's, I was told that there were some great stories coming. And the issues I've so far read do seem on the edge of greatness, they've just not been up to the standard of those published just after The Empire Strikes Back (Death Probe, The Crimson Forever, etc).
I'm vaguely aware of some storylines involving the Nagai and Zeltrons coming up which people remember with much love, but they're going to have to be good, because I'm severely disappointed with the direction the comics have been going lately.