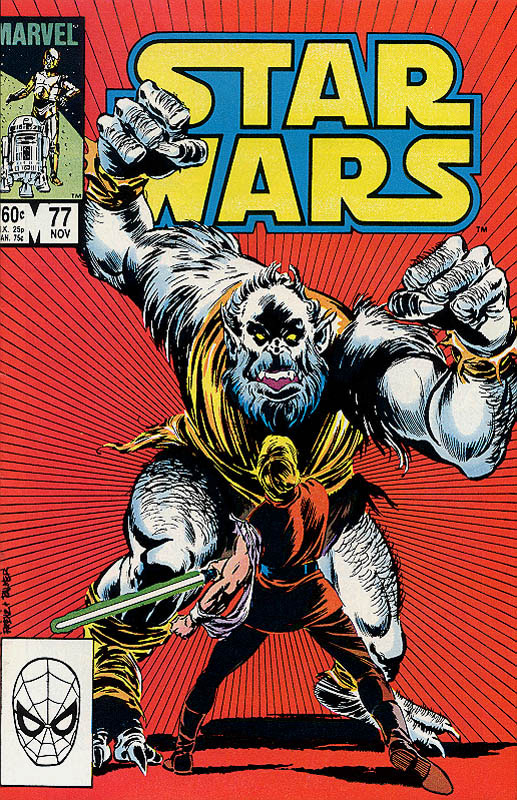 What is it ? : Lando, Luke, Leia, Chewbacca and the Droids return to the Rebel base on Arbra, from their failed missions to location Tay Vanis. However, the base has received information that another Rebel operative has the same information, Han Solo. While Leia is skeptical about the information, since Han is frozen in carbonite and couldn't have received any information. However this has come from the Empire itself, so the Rebel leaders are fairly confident in it's accuracy.
They ask the heroes to split into two groups, one to find Han, and the other to follow another lead on Tay Vanis.
Luke and Leia are dispatched aboard the Millennium Falcon to Kabray Station to follow the lead about Vanis, a group of Hoojib's headed by Plif is going along with them to pose as diplomats for the world of Arbra.
Arriving on the station, they find a wide range of races, including many from recent stories such as Lahsbees and some Zeltron females who are attracted to Luke and provide unwanted attention. So they split up, with Leia using her diplomatic knowledge to pretend she is part of Plif's entourage, while Luke and Plif search the station with Plif providing telepathic knowledge of when anyone is nearby.
Luke discovers a hidden message from Vanis, but then overhears a plot to poison the Imperial Governor, as he sneaks out he is nearly caught by a Stormtrooper patrol, but the Zeltron females provide a distraction as they find him and begin fawning over him.
Leia however is cornered in the dressing room for "Shirley: Chanteuse of the Stars...", and is forced onto the stage to sing, Luke is shocked to see her made up as the performer, but notices the poisoned food being delivered to the Governor.
Fortunately one of the Lahsbee delegation reaches puberty and metamorphoses into a rampaging Huhk. This causes a distraction that allows Luke to dispose of the poisoned food, but the creature is eventually calmed by Leia's singing, and as she continues to keep the savage beast calm, Luke sits with the Zeltron females, Lahsbees and Hoojibs wondering how many verses of the song she knows and can keep this up for.

High Points : I really enjoyed the use of all of the Aliens introduced in the recent comics, with the Lahsbees, Zeltron and Stenax all making appearances, and the absence of the Iskalonians being mentioned due to the events of the last issue. This is some lovely continuity, with the Lahsbee's transformation into a Huhk at puberty proving a vital plot point. The background chatter as Leia circulates is great too, dropping in plot points (such as a comments about what the Lahsbees are like after puberty, and the aforementioned absence of the Iskalonians), it really adds to the continuity and makes all of the recent issues feel like they're really a part of a small corner of the Star Wars universe.

I also found the idea that there's some other reason than their usual flirtatiousness that the Zeltrons are attracted to Luke to be interesting, but it doesn't seem to go anywhere.

It's also quite a nice plot point, that the Stormtroopers can't deal with the rampaging Huhk as their weapons fail to fire, and Luke realises that the Hoojibs he and Leia brought to the station have been feeding from the energy in the Stormtrooper weapons. It's a nice callback to the Hoojib's feeding on energy from many issues ago, but also a nice piece of unexpected repercussions to bringing the Hoojibs along with them.

Low Points : However, that's about all I can say good about this issue. Leia being forced onto stage in a skimpy outfit to sing for the audience while Luke watches just seems sexist and boorish and made me fairly uncomfortable reading it.
But that's just the largest problem, the entire premise seems poor as the heroes are send again for information on Tay Vanis, although we are told this time that he's got information on a new Imperial Superweapon (given the proximity to the release of Return of the Jedi, I presume this is a tie in and will turn out to be the Death Star II, but I've been wrong before). Lando and Chewbacca are going once again after Han, and it all just feels like we've done it before.

And although it's well used, the transformation of the Lahsbee into Huhk doesn't feel very Star Wars, since it's basically pop and he's changed, we don't get to see any slow transformation or other signs. The Lahsbee simply sees Leia in a revealing outfit on stage singing, and pop, puberty and he's a rampaging monster. Not sure if it was supposed to be a message about the effects of puberty, but the instant change feels more like magic that a natural process.

I also totally baffled as to why Luke is trying to stop anyone poisoning an Imperial Governor. I know he's a hero, and I know murder is bad, but he's fine hacking people into tiny chunks with a lightsaber, so why stop someone killing one of his enemies? If they'd included some plot point about the murder would lead to checks which would lead to their identities being discovered, then I could kind of understand, but there's nothing like that mentioned.

So what do you really think ? : It's got some interesting ideas in it, but I really wasn't impressed with this one at all. It feels like it's treading water just waiting for Return of the Jedi to be released, the plot is barely existent, it feels outdated, and it doesn't really work as a Star Wars story.

Final Words : Oh dear, this is really the lowest point the comics have reached for me, I'm really disappointed and saddened.